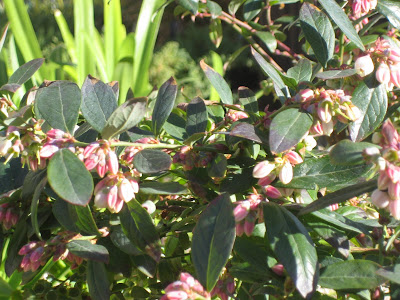 Look closely at the photograph. Each one of the bell shaped flowers first appears cloaked in bright pink. The petals will fade to white before dropping. Replacing the blooms will be berries which will ripen into luscious purple balls about the size of a jelly bean.
I first spotted this variety of blueberries, named ‘Sunshine Blue’, at Roger’s Gardens in Corona del Mar. Blueberries are not traditionally a Southern California crop. Most varieties prefer colder winters than we have here. However, ‘Sunshine Blue’ thrives in our mild winters.
I confess: I snuck a taste right there in the nursery. I bit into the juicy purple globe. The tangy sweetness burst in my mouth in a way no ordinary blueberry from the grocery shelf ever had.It was like tasting Beethoven’s Fifth Symphony.
For those concerned with space, Sunshine Blue fills out into a well behaved dense mini-shrub, about 3’ around. Because she likes slightly acidic soil, and I prefer not to bend over unnecessarily, my blueberries are potted up in glazed pots filled with azalea potting medium.
Compact. Neat. Flowers. Superior and abundant fruit. These attributes make the dwarf blueberry- vaccinium corybosum 'Sunshine Blue' a very desirable addition to the suburban garden.
Posted by Lydia at 12:15 PM