The Grapes of Wrath Revisted

"Any intelligent fool can make things bigger and more complex. It takes
a touch of genius- and a lot of courage to move in the opposite direction."
--- Albert Einstein 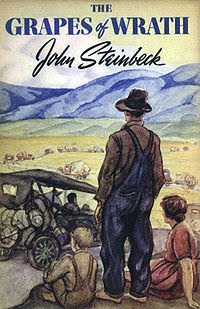 Topsoil barren, blows away in winds. Their living in agriculture destroyed, a half million Americans are displaced. For his chronicling of the human toll of this avoidable tragedy caused by the Great Dust Bowl of the 1930's in The Grapes of Wrath, author John Steinbeck earned the Pulitzer and the Nobel. 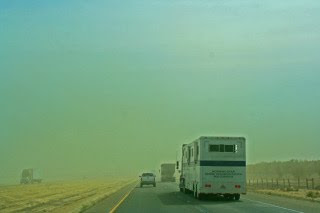 What happened in the 1930's should not be recurring. But it is. In a twist of irony, to where American refugees fled ecological disaster earlier this century: California. This photo was taken yesterday by Sue Maxwell between Sacramento and Los Angeles. Whipped by winds, the topsoil of some of the most fertile crop land in the world turned to dirty dust and choked the sky.

What clouds the air should be nourishing crops to feed and clothe people. If it blows away because we have allowed the political establishment to not put first things first, then fruit trees will continue to die, more families will lose their homes, more people will lose their dignity. The state will have less revenue, need to provide more welfare and import food we once grew ourselves.

Why? Because many intelligent fools in courts and legislatures have forgotten what can be accomplished when goals are simple, targeted and focused. Gratitude for, "Where water flows crop grows," needs to be rekindled.
Posted by Lydia at 7:04 PM

That picture "on the road" is so very stark! Where is this all going? And how will it all end. Where are the Hearts of the Poloticians? God Knows!

I don't think the problem is with the hearts. The problem lies in a lack of simplicity: of tackling too much at once. Of not setting priorities. If first things aren't done first and thoroughly, time and money go 'round in a whirlwind- and the best of intentions get wasted.

On the return trip Monday the 9th, the winds weren't blowing, but the devastation to crops and trees is heartbreaking to see. Personally, I believe the 'tree-hugging' idiots have splinters in their brains.
xo
Oregon Sue