Honors In the Garden 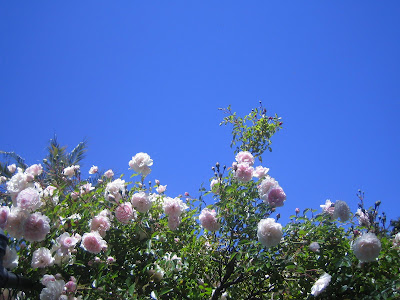 3 PM, May 30th. Shots from the honor guard pierce the still quiet of the bright blue sky. 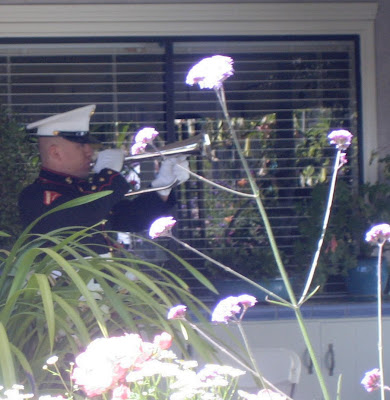 The plaintive call of the bugler explains without words to unattending neighbors why shots rang out on this Sunday
"Lord of our lives, our hope in death, we cannot listen to Taps without our souls
stirring. Its plaintive notes are a prayer in music--of hope, of peace, of grief, of
rest... Prepare us too, Lord, for our final bugle call when you summon us home!
When the trumpet of the Lord shall sound and death will be no more." * 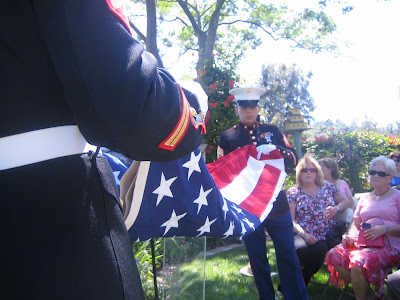 Mom's ashes will be flown to Puerto Rico; there was no casket to drape. Instead, the United States flag was opened then carefully folded in the ritual specific to this nation.

Before presentation to closest kin the flat was folded into the shape of a tri-cornered hat, as was worn by colonial soldiers during the nation's battle for Independence. With respectful cadence, the red and white stripes are folded before being wrapped into the star filled blue field; signifying how the light of day vanishes into the darkness of night. 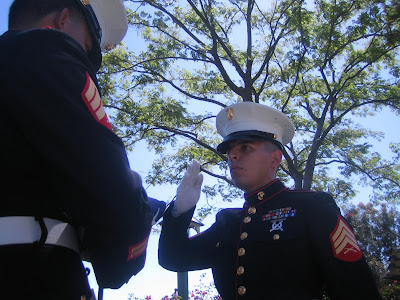 The honors to my mother, who served this nation by providing care to wounded warriors or world War II were provided by young Marines ( and one Navy man) through the Pico Rivera headquartered Battery N, 5th Battalion, 14th Marines, 4th Mar Div.
So began the structure to the ceremony needed to give a proper goodbye to my mother.
I honestly did not know this part could be pulled off. A garden memorial does not fit within the boxes to check on any federal Internet form. Wanting and deserving these honors was likely not enough.

The family is very greatful to have Field Representative Pat Fabio of Congressman Gary Miller's office in assisting my mother.

*From the invocation delivered by Chaplain (Colonel) Edward Brogan (USAF, Ret.) at the Taps Exhibit Opening Ceremony at Arlington National Cemetery, 28 May 1999

More information on the US Flag Folding Ritual found at http://www.usflag.org/foldflag.html
Posted by Lydia at 12:43 PM

Perfect. Your Mother is honored in the highest way. I know she's in Heaven smiling down on you. My love and hugs.
xo Oregon Sue

How truly wonderful Lydia. That Ceremony is so very beautiful and meaningful, too. I love that you explained what the actual folding means---I don't remember hearing that before and I found it quite moving. What a perfect way to Honor your dear dear mother.

it sounds like it was beautifully done, and fitting, Lydia.