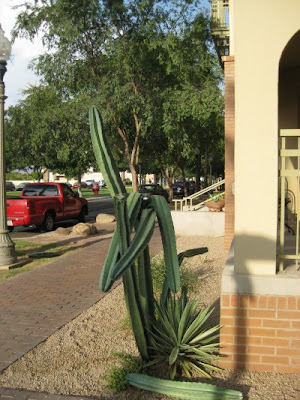 America will never be destroyed from the outside. If we falter and lose our freedoms, it will be because we destroyed ourselves.


How hot is the squabbling over illegal immigration and Arizona's attempt to legislate a solution? So hot it makes me feel as wilted as this Phoenix cactus.


Turning on each other is damaging our society's psyche. Do we really want to make  terrorists envious that what they could not do to us, we will do to ourselves?
"Seek first to understand. Then to be understood."
-Steven Covey 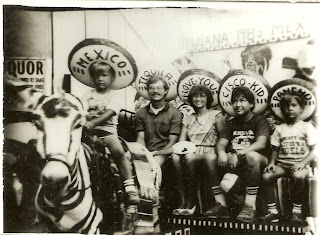 The summer of 1985. The family spent a spectacular weekend in Mexico. Going over a bump in the road in Tijuana, the steering wheel popped off our Chevy Malibu. Down in Ensenada we played in the ocean and allowed this perfectly silly picture to be taken of us.Seated directly to my right is my nephew- Manuel Luis Chavez.
Coming back to California, immigration waved us over. Where was I born? Los Angeles. Could they see my papers? I handed over my drivers license. Was I scared even though I was a citizen. Yes. Should I have been?
No.
Am I alone in wishing an Ice Tea Summit could be arranged between Arizona Gov. Brewer and US President Barack Obama? Practicing lawyers would not be allowed to speak. Broadcast would be on a delay so words such as - left, right , Democrat, Republican, liberal and conservative could be treated like 4 letter words- deleted to protect the audience. Like a blind tasting. Only once the merits have been ingested- then let the money, effort  and attention be strategically aimed at solutions.
Kidnapping, murder, the inalienable right to human dignity of all people. These are facts on the ground that deserve our united efforts.
Cactus hit by lightening in Thunderstorm by Karen Pollock. 2009
Posted by Lydia at 11:29 AM

Ah Lydia, In a perfect world your suggestion would be good. However, Obama and Brewer already met in the Oval Office. She reported all the things they said and the things he promised to do.

As what I've usually noticed, he promised the moon and delivered very little in help.

Even all the Arnold Palmer Ice Tea in America won't help this situation, I'm afraid.

It also reveals a bit about what he thinks of the American people that he is perfectly willing to set a meeting (remember Health Care?) and only be willing to talk- not listen. Not have any empathy for any but his own position.

He is my President and I am disappointed that he has decided not to be all that he can be. He is satisfied with how nice it is to be him- and with being tone to realizing that developing empathy- working with the other side- that is where strength lies.

Unless he changes his attitude- he is doomed to be a weak President.

Lydia,
What a cute photo but it took me awhile to figure out who those people were! lol No one there looks like the people they are today. I am guessing the only girl is you and that's Gerry on your right. (What threw me was you said the person on your "right" was your nephew. No, your nephew is on your left. Hey! I am confused enough girl! lol Then I figured the other two were Trevor and Kenny! teehee Process of elimination!

I am afraid our illustrous president never wants to settle the illegal immigration issue! He sees them as undocumented Democrats! You can dream tho. :):)

Each time I am at the border coming back into the USA I get asked those questions too. It is a teeny tiny bit scary because of all the frightening stories you hear about the Mexican jails, etc. They even have drug sniffing dogs sniffing at your car.
It's a shame that all the border isn't that tight!
Sorry but this whole subject brings on my hot flashes! :(:( I get irate thinking about it!

Sooo I will move on to something else. Love the cactus! That's a hoot! I think I am the only person ever to kill a cactus plant!
I used to have to go confess to Cobi and buy new ones! :)

Hugs, Trisha
p.s. Be sure to write nice things about AZ since you are working for someone from there. :):)

Trisha- You are right- I am the only female in the lineup.

Will write about work completely separate from politics. Arizona amazes me. On a per capita basis, they contribute far more than there fair share to architecture and building to the environment.