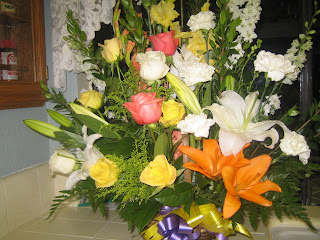 Memorial Bouquet
One year ago,  our oldest son moved out of state. Walking in our home from saying goodbye, the phone was ringing. Calls before 9 AM on a weekend do harken with urgency. My mother was in an ambulance. Almost to the minute this is posted, my mother passed from this life to the next.
Which makes the year which has passed, odd. The flowers which were her bouquets still bloom. But they don't get to travel so much. With gasoline at  $4.33/ gallon, the drive to my mother-in-law's is too expensive for a regular trek. 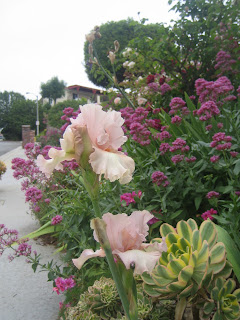 Iris, Valerian and Aeonium 'Kiwi' tame the sidewalk heat
Today, our younger son Kenny and his bride treated Gerry and I to brunch at Maggiano's Little Italy in South Coast Plaza. Part of a chain and generously sized, maybe it was Sinatra's voice- the place radiated with a charm as if it were a family establishment where Mama and Papa might be in the kitchen.  The service was excellent. The food scrumptious and the ambiance delightful. The restaurant was scrupulously clean. The offerings might not be quite as succulent compared to what a skilled homecook serves guests. For me- I didn't spend 4 days in the kitchen- 2 cooking and 2 cleaning.  This tradeoff is more than fair.  We will be back...
On the ride home, I thought of what I might pen to honor my mother now that her lovely voice is in another realm...
In 2006 I wrote my first obituary. As a writer, there  is no more hallowed endeavor than the words we lay open upon a person's death. Below is the text saved from my mom's memorial. They speak of her and the world as she knew it.
Ethel Maria Sepulveda Lent
December 5, 1922 to May 8, 2010
It was my mother’s specific wish that there be no sad good-byes on this day. She wanted to be the honored beloved guest in this garden which she was, is, and always be so much of.

Please join us commemorating and celebrating her life. Beginning with a little background to know how the Ethel Maria Sepulveda Lent became the woman who was not just my mother, but my closest friend, mentor and advisor.


Born not longer after her only brother, Eugenio, on Dec 5 1922 in Cabo Rojo, Puerto Rico to teacher Antonio Sepulveda and his young wife, Monserrate Rivera. Tragedy came quickly to the family when Monserrate died in childbirth when my mother was only two. Antonio never recovered enough from the loss of his wife and infant to raise his older two children as a single father.


One of mom’s earliest memories was of her aunt with 10 children not being willing to make it a dozen under one roof. They dressed my mother up and took her to the orphanage: there was no room. So the care of two little children was left to a spinster Aunt.


On scholarship, for high school- mom attended the exclusive Blanche Kellogg Institute, associated with the female equivalent to the male Ivy League colleges- Mt. Holyoake. The virtues of Christian values and temperance were in addition to the public school curriculum were taught in English. .


1943. Mom received her bachelor’s degree from the Polytechnic Institute of Puerto Rico. Now know as the Inter Americana University, the Christian founded institution was dedicated to being a cultural bridge between North and Latin America. From the web page, this school is “devoted to preparing students in all branches of humanistic endeavor; social and scientific.”


Mom was offered a scholarship to continue her education to be a physical therapist; however the same opportunity was not offered her brother. Her family would not let her accept.


Mom got a job in a bank. She had a desk and was paid less than what a carton of cigarettes costs today for her weekly salary.


WWII broke out. Sept 6, 1944- Mom flew to Jacksonville, Florida to enlist in the United States Navy. She became an occupational therapist at Bethesda, MD.


That is where she met my dad, the late George Daniel Lent. He was a serviceman who landed in the hospital with a broken arm after being jumped by an ethnic gang. His doctor thought they were a cute couple; he kept my dad in the hospital a little longer. When they were both discharged, George brought Ethel to California to meet his family. He wanted to be a lawyer. They married Oct 6, 1948.


Nine months and two weeks later my beautiful sister, Gina, was born. Next: Candace, who was stillborn. Then me. Last, my genius baby sister, Marina. Dad never finished college.


Early in their marriage, Mom worked in a lab. But they preferred she be home raising the girls. Giving us guidance. Filling spare moments with volunteer work. She didn’t drive and we were generally not allowed babysitters, so we frequently were brought along to PTA meetings and  food banks. Gina and I worked shifts at Whittier Hospital as Candystripers under mom’s direction.


As we girls came closer to college age, mom went back to college. She said too much had changed in Chemistry. She earned her MA in Spanish and her teaching credential from CSULB. In this order: she bought a car, learned to drive and returned to the workforce as a high school teacher, a job which she retired from with a pension that COLA drove up to just over $500 month when she passed away 31 years later.


Instead, she focused all her love on her children, grandchildren and great grandchildren. Her garden, until health separated her from it.


My mother’s health was never what we refer to as “good”. It is a miracle of God’s love that we got to enjoy her company for as long as we did. At 4:15 in the afternoon, when her soul took flight, it was with Gina, Kenny and I at her side, praying for her safe passage to heaven.

As much as the family regularly argued politics, mom was pretty mum about religion, But in her waning months, we got to discuss matters of faith. If she had not told me that she considered herself a Christian, these last few weeks would have been far more difficult. However, the faith that she is now, at long last, getting to know her own mother and child she never knew is a comfort. That her earthly body is no longer bound to a wheel chair and tied to routines of pills and shots- for her I am happy.

How wonderfully loved your mother was -- your summary of her life was just right.

You are right. I never did get to read this. I loved your story about your mom. What a story that was! It would have made a great movie, don't you think?
She was an amazing woman. I felt so sad when I read about them going to the orphanage so young but was heartened when an aunt took them in. It angered me to think the family would not allow her that scholarship because her brother was not offered the same. I had a little cousin who was a gifted child and was offered a fabulous opportunity but my too proud uncle would not accept it because he thought it was accepting charity. Dumb dumb dumb!

I did not realize that today was the anniversary of your mom's death. Here I was asking for advice about my own mother. I did not know.
I am so glad that you were with son and new d-i-l today. I hope today wasn't too difficult for you.
Thanks for sharing!
Hugs, Trisha

Trish- When my mother passed, it was clearly her time. She suffered greatly in the last years of her life. However. on her last good day her mind was clear, her mood cheeful- the aches and pains under control. She received her Mother's Day flowers early since I wasn't sure how the schedule or mood would go with son's move.

My mother would be pleased to lend a helping hand.

I never thought of her life in terms of a movie. Maybe because she was intensly private.

Lydia,
I remember meeting your Mother at the house in Whittier and several times after that over the years. Very sweet lady, with a mind of her own. :) The location of the Memorial Service was simply "right", in your lush garden in the afternoon, with the family, friends, the military presence, it was perfect. A love letter from a daughter to her Mother. Very touching. XO Edda

Lydia, just returned home from my daughter's where her hubby surprised us both with a lovely dinner at the Italian restaurant named Alliota's. The decor was enchanting and the food dvine. The owner used to be the head chef at Antonello's in Costa Mesa. I love that restaurant. Try it next time you're near South Coast Plaza.

I read and remembered hearing your mother's memorial last year at the beautiful service you held in her memory. I have thought many times, that that was the nicest tribute because of the locale and the military honor guards and of course the Pastor and Senator Huff speaking that I've ever attended. Your mother would have really been pleased, I'm sure.

My mom passed 11 years ago. My friend Carol told me in an email her mother passed 30 years ago now and both of us admitted to one another how we still miss them so much. I took Bradley w/me today to the cemetary and placed a flowering plant and stayed for a while. I explained to him that no matter how much he loved his other grandmother and misses her and when I die that he'll miss me, it is and will be nothing like when he loses his momma. He seemed to really understand as best as one can at that age.