"The real voyage of discovery consists not in seeking new landscapes,

but in having new eyes." 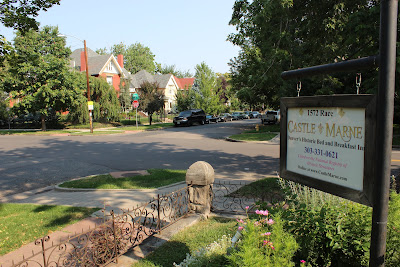 When I travel, I am a student of all who passed before me.

William Lang was architect to the rich and famous in 1889 Denver.  Built for investment banker William S. Raymond, the three-story articulated Rhyolite stone mansion was the first upscale home built away from the congested downtown. 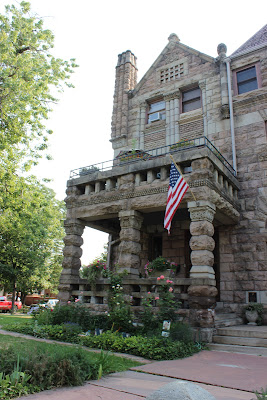 Built in the late Victorian era, in this last incarnation as a destination bed and breakfast establishment with bona fide historic credentials, the imposing structure clearly reflects the  European eclecticism favored by the nouveau riche of the soon to end silver boom.  Please walk through the images and note the steeply pitched roofline, elaborate cornices, bay windows and balconies embraced by its charming garden. 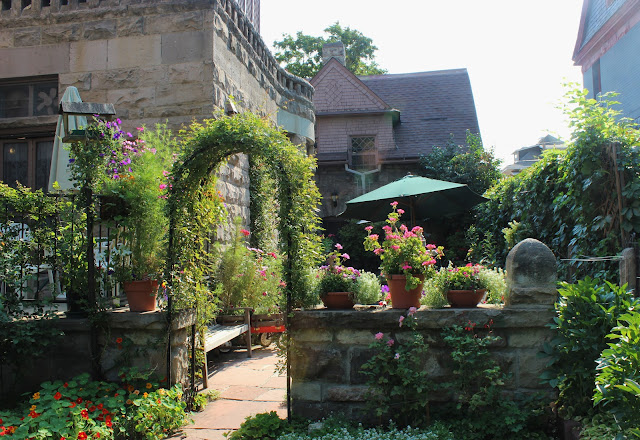 Named the Marne during the ownership of the Edwin Van Cise family from 1918 to 1938, the home was divided into apartments. It was a mixed-use development. It served as a processing center for the Department of Corrections.

It spent some time as too many buildings do when they fall out of fashion- vacant, vandalized and most likely to be raised.

Then the Peiker and Feher- Peicker Family saw past what it was to what it could be. They purchased and completely renovated the building as a bed and breakfast in 1 year- opening in 1989 to acclaim for their tireless hospitality. 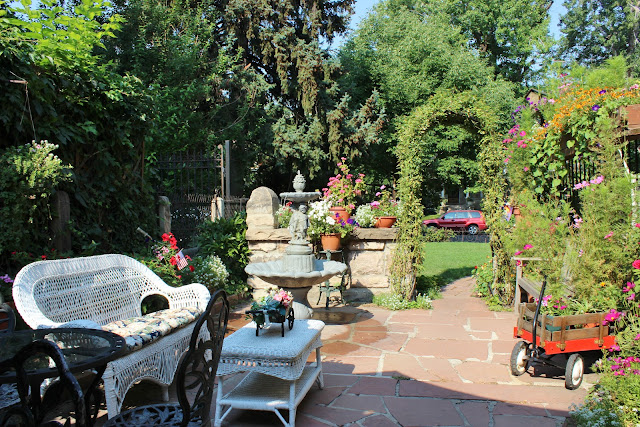 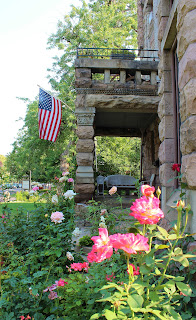 They saw past the flooded basement and ceiling open to the stars to understand this was a project worth undertaking. The 22" walls offer protection from extreme temperatures that blow through the Mile High City. 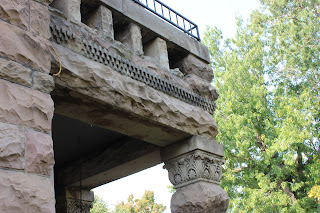 The visual heaviness of the structure 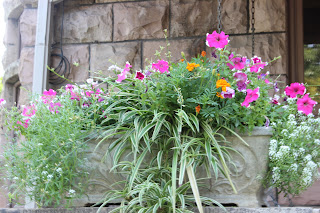 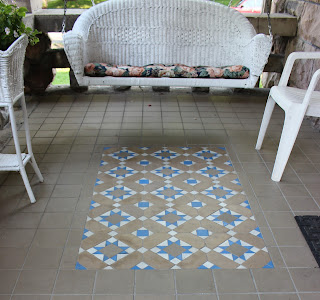 Inlaid tile floors are a hallmark of the architect Lang. Built in the days before air conditioning, broad porches fitted with swings  were popular places for corseted women dressed in cumbersome layers to fan themselves. 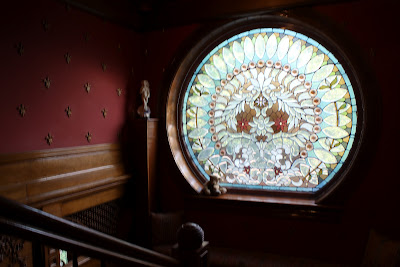 The 6' wide Impressionist Movement stained glass representation  of a peacock with tail feathers fully fanned out was designed for the original  home by M. Watkins. 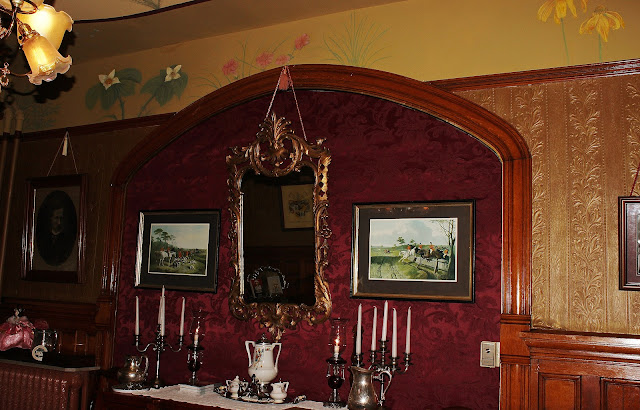 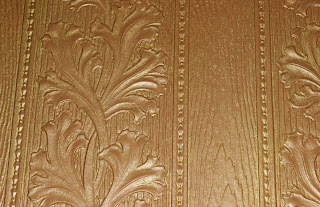 The original lincrusta wallpaper may be the largest example of its time still in existence. Invented in Britain in 1877, the name of the first washable wallpaper is derived from it base material -Lin for Linum (flax) and Crusta (Relief). The  depth of golden sheen is unlike anything modern. 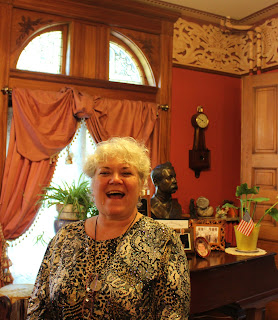 Melissa Feher-Peiker shares a good laugh.  Notice the painted ceiling border. The exquisite painting of the pipes- at the time the inn was built, indoor plumbing was something to show off, not hide behind a wall. 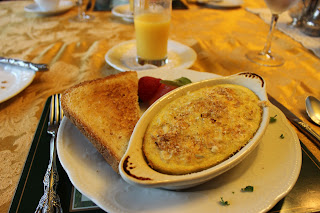 Not to intimidate my tablemates at breakfast, the camera was put away. 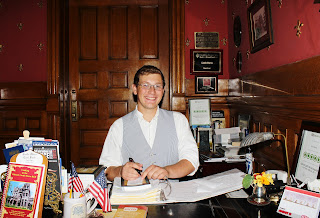 Louis J is the remarkable inn-keeper in the making. With patience, poise and confidence the young man guided me through Castle Marne, with a love of history and our nation obvious in every sentence. Someday I hope he runs for Congress. Whatever his party of choice will be, I expect I should like to vote for him.

I love how you manage to pull out so much history and details wherever you go, Lydia. Such interesting details here at this B&B.

Thank you Nikki. I am so blessed. This is a building deserving a biography.

What a lovely building! I don't remember your telling us that you stayed in a B & B. I have never stayed in one. Wish you had taken a photo of your room. LOVED the stained glass window!It was beautiful from the inside but it left me wondering what it looked like from outside and where it was located on the building.
Your breakfast looked amazing! What was it?
I do love your spirit of adventure!

XO Trisha
p.s. Your young friend who showed you around is no doubt a Republican. A small business man and I noticed the American Flags in the cup on his desk! :)

How wonderful that this Historic Home has been so lovingly restored....Wonderful pictures, Lydia. How long were you in denver? Are you still there?
So much to see there....WOW!

My, what a beautiful place. Your breakfast looked good too!! xo

Hi Trisha- You can click on the link at the bottom of the story. You can see all their rooms. I'm not that good with low-light photography (just yet). They have a cookbook you can request. Breakfast looked even more scrumptous when the edible flowers came out.
The young man is in the formative stages of building a philosophy. Whatever it turns out to be- I am certain it will be grounded in wisdom and experience.

Good morning Naomi! I was in Colorado for a week- long enough to take 900 pictures to edit between assignments):-

Lydia, been so busy I've just now been able to view this. I've been waiting, and salivating to read about the B & B you stayed in. Yes, Trisha, I remember her telling us that she was going to stay in one. Boy this one sure didn't disappoint, either!

I've stayed in a few over the years. Always a treat. Have friends that own a very famous one that's been in many mags. Built in 1865 by a lumbar barron in Stillwater, Minn. Everything there is totally authentic, too.

One thing I didn't notice because non of the pictures are of any ceilings. Did any of them have coffered ceilings? I so appreciate that artistry.

I became honored to obtain a call coming from a friend as he identified the important points shared on your own site. Looking at your blog write-up is a real amazing experience. Thanks again for taking into consideration readers like me, and I hope for you the best of achievements as being a professional in this arena.