It sounds counter-intuitive. But to get ahead, sometimes a person must stop. Get completely away. Let creativity seep back in with deep breaths of fresh air.

There is no fresher air than up the coast in Santa Barbara. 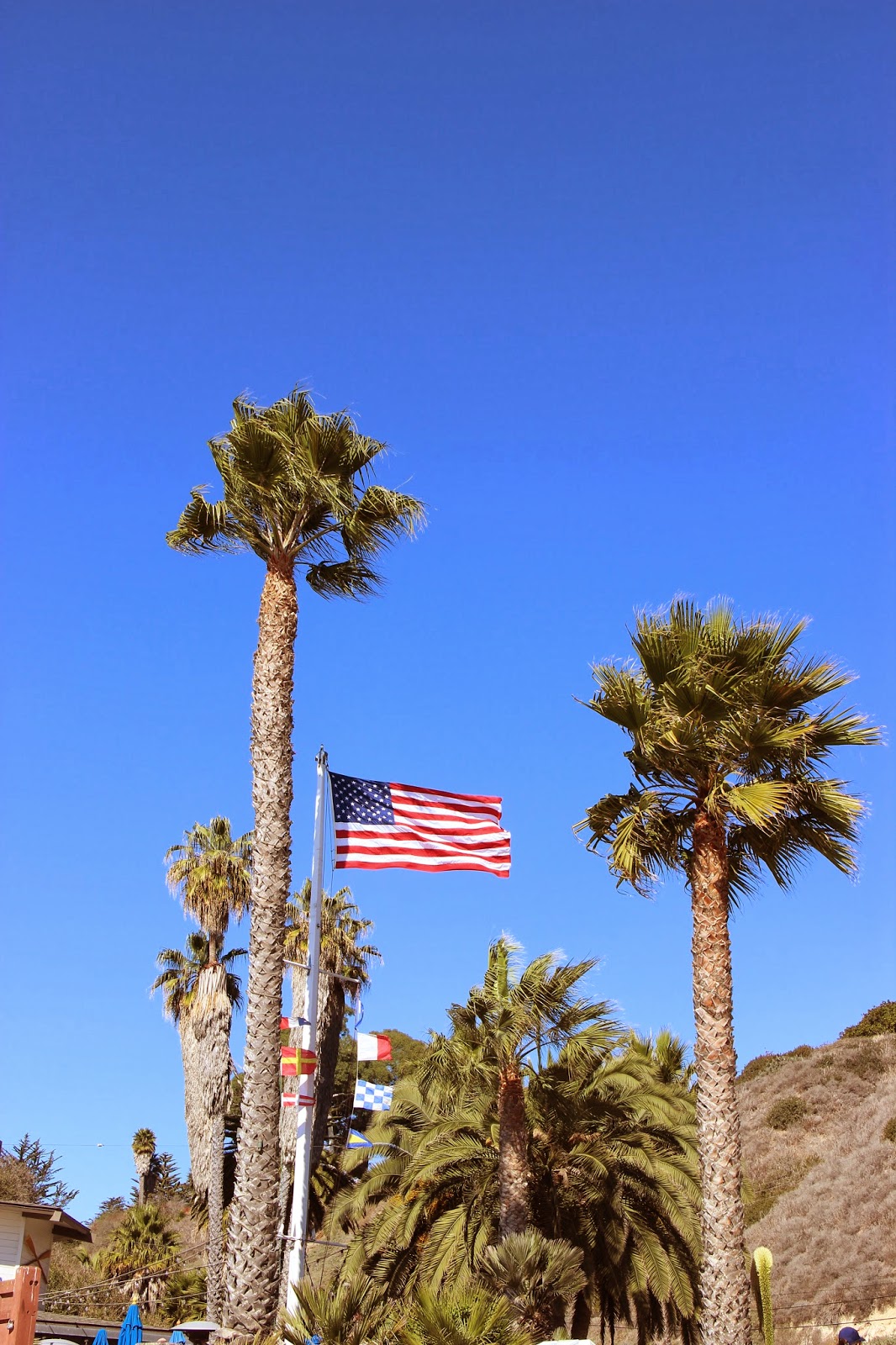 Friday had been a late start up the coast . Work ran over. Traffic stopped  as often as it moved between the Los Angeles Civic Center and the Ventura County line. Luckily, there was still a day without structure ahead of the garden tour I collaborated on.

We woke up to a flag-blowing- straight-out Saturday morning in Santa Barbara. As the event was unintentionally  scheduled in conflict with the only national/ religious event not on the calender- the Super Bowl- my honey earned extra bonus points for traveling with me. At home were 2 perfectly good big screen TVs with only 2 little Chihuahuas and our house-sitting son to watch the season football finale. 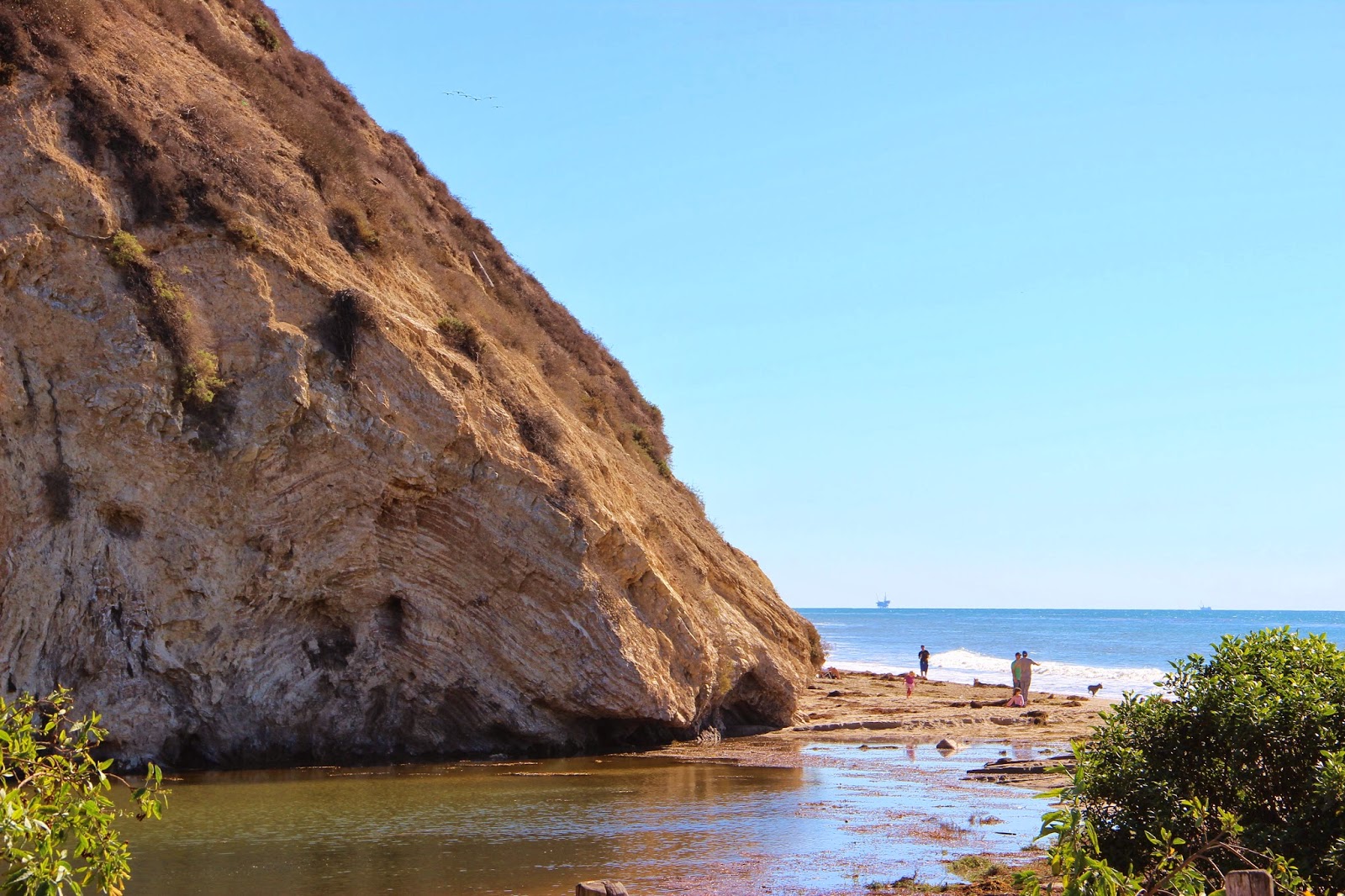 Our day of unscheduled bliss began with Gerry heading the car straight to where we imagined the beach would be.  Thanks to a handicapped license plate (the revenge of bodies subjected to the demands of wanna be athletes does provide this handy benefit)  we were awarded the last parking spot at this magic cove.  That morning, the fresh water nearly kissed the saline sea.  The sign called this place Arroyo Burro Beach.  The locals know it as Hendry's beach. We will remember it as paradise. 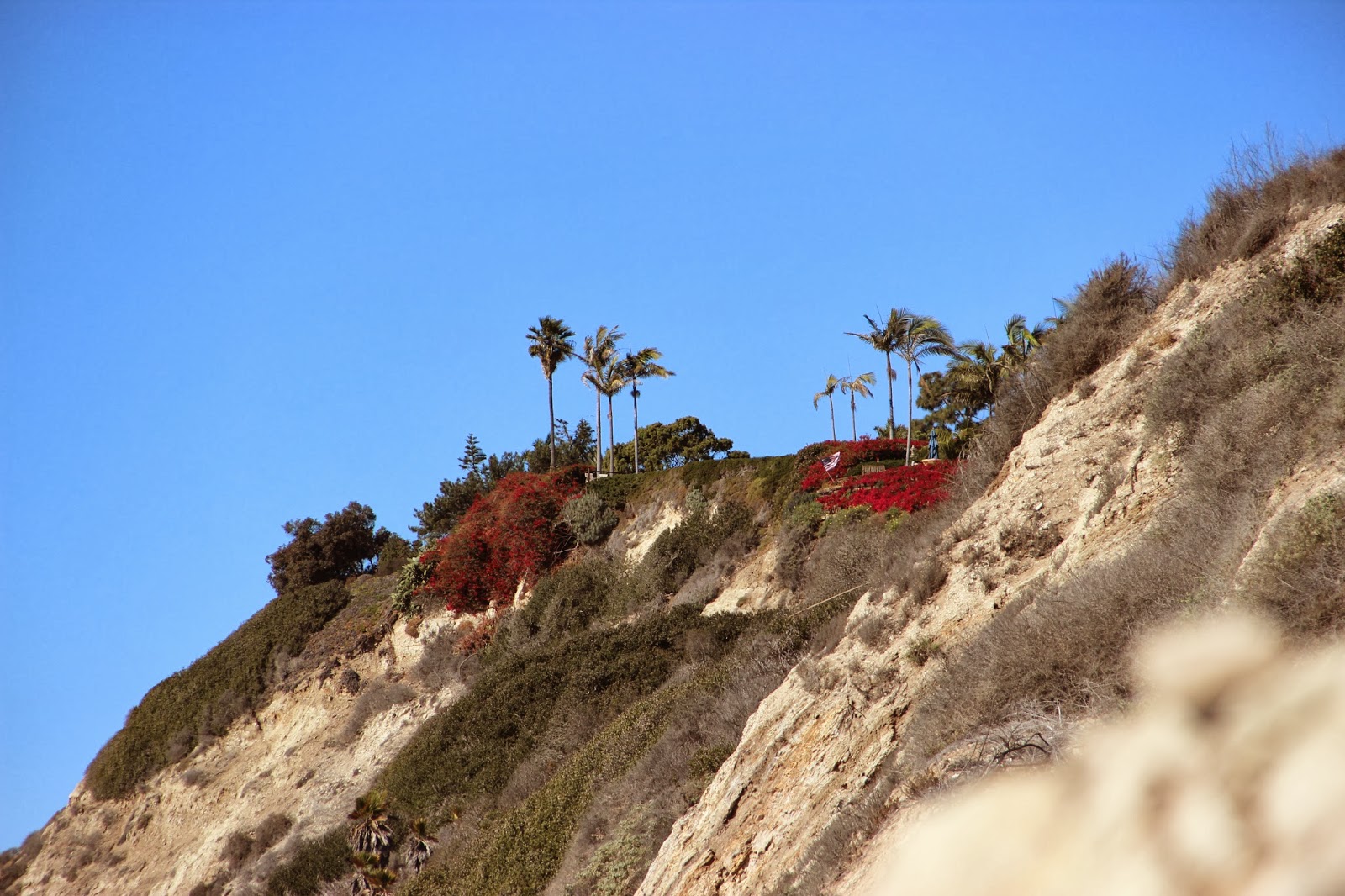 A few palm trees. Some bougainvillea. A bit of ice plant. When the natural beauty is this spectacular- there is no need to fussy-up the landscape. 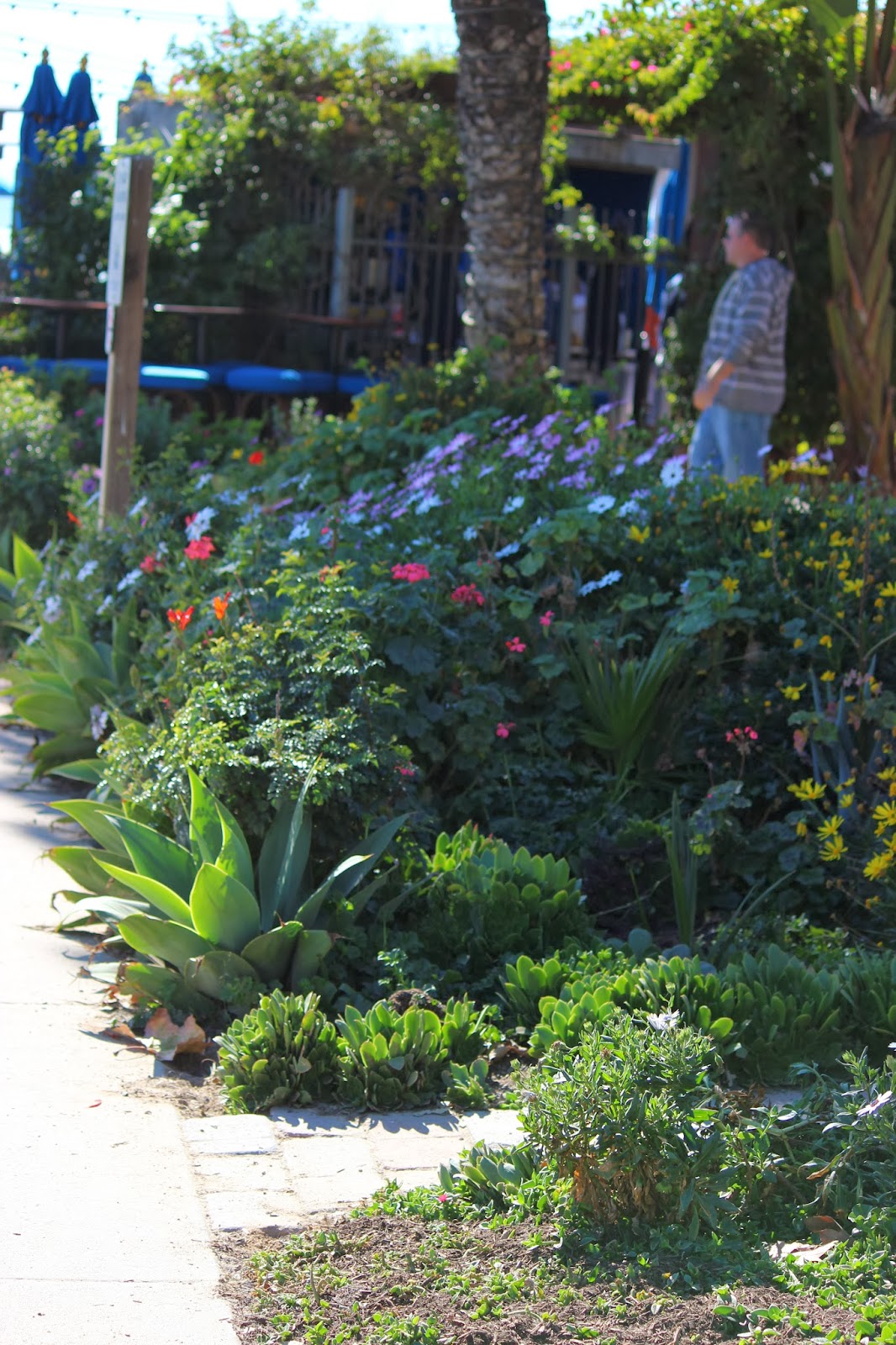 With the challenging conditions of salt- bearing winds and sandy soil, the plantings were colorful: sturdy succulents and sturdy standard fillers ( like geraniums and freeway daisies)  commonly found at big box stores. These are plants not needing much attention, but if they failed, are just pennies to replace. 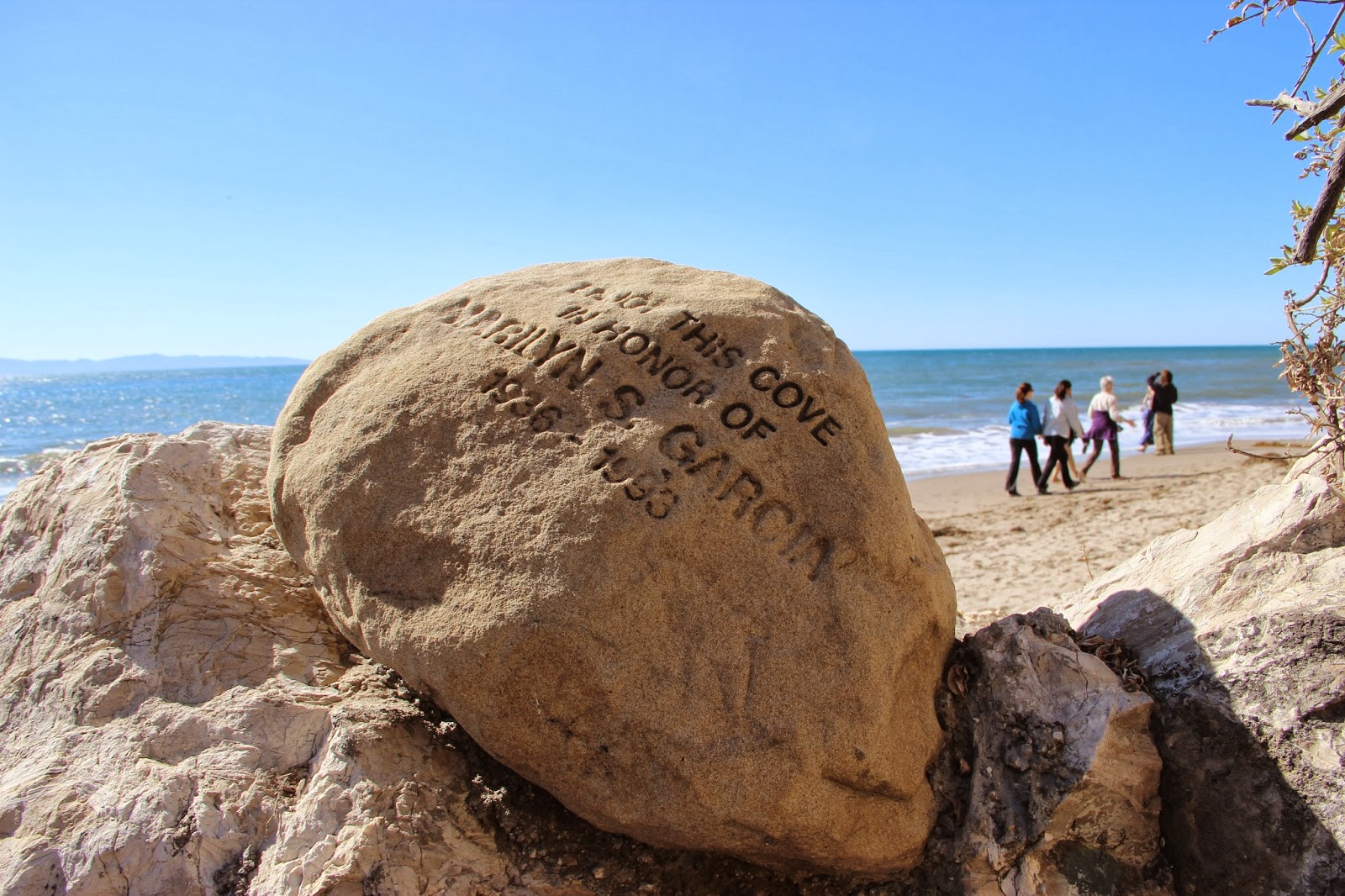 Gerry found this rock. It dedicated the cove to a Marilyn S Garcia, who died in 1993.  There is only one thing I know of this woman. It is that she was very loved to have her memorial placed here. 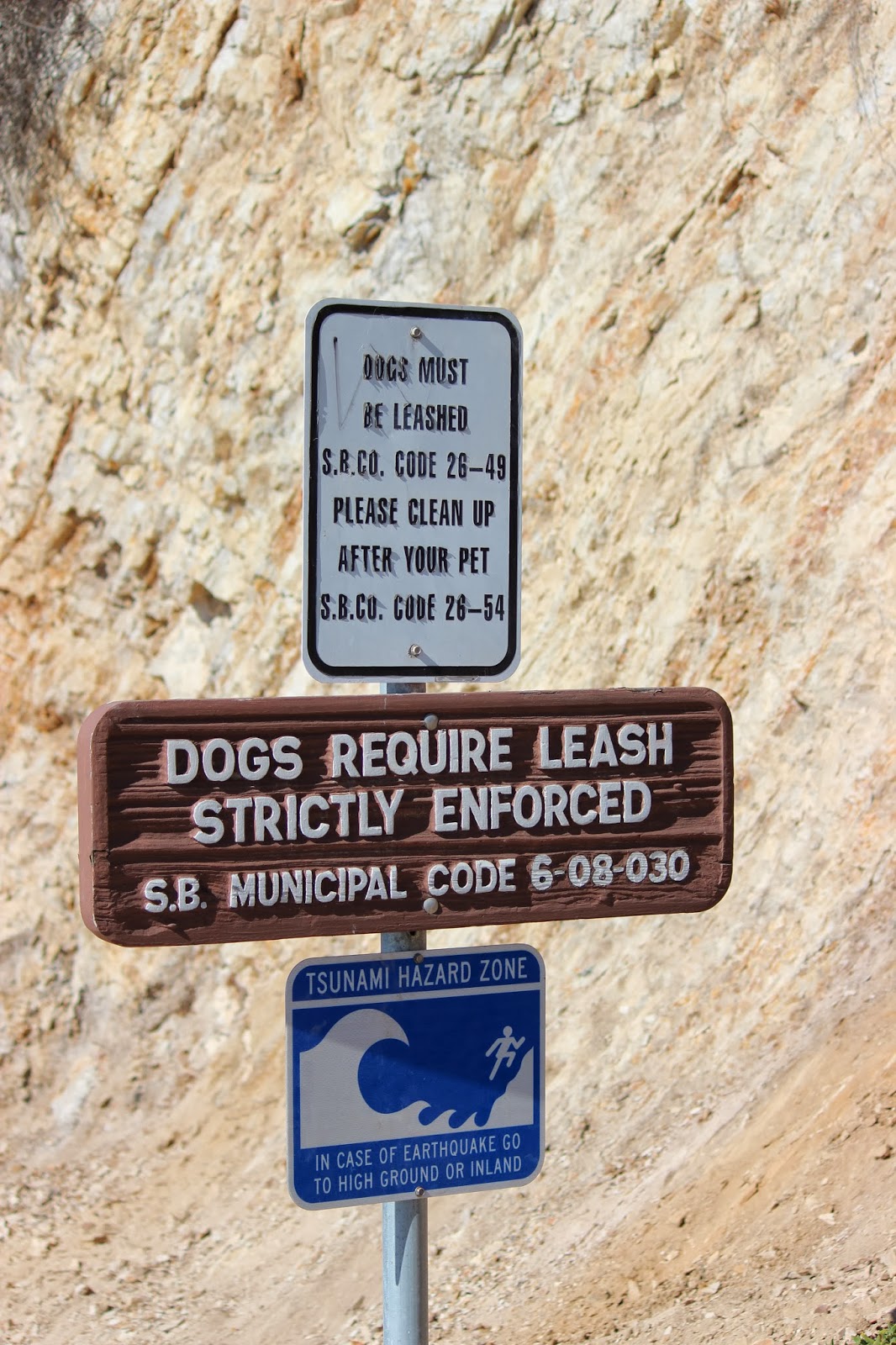 Heralded by some as one of California's best dog beaches, the sign proclaims dogs must be kept on leash. 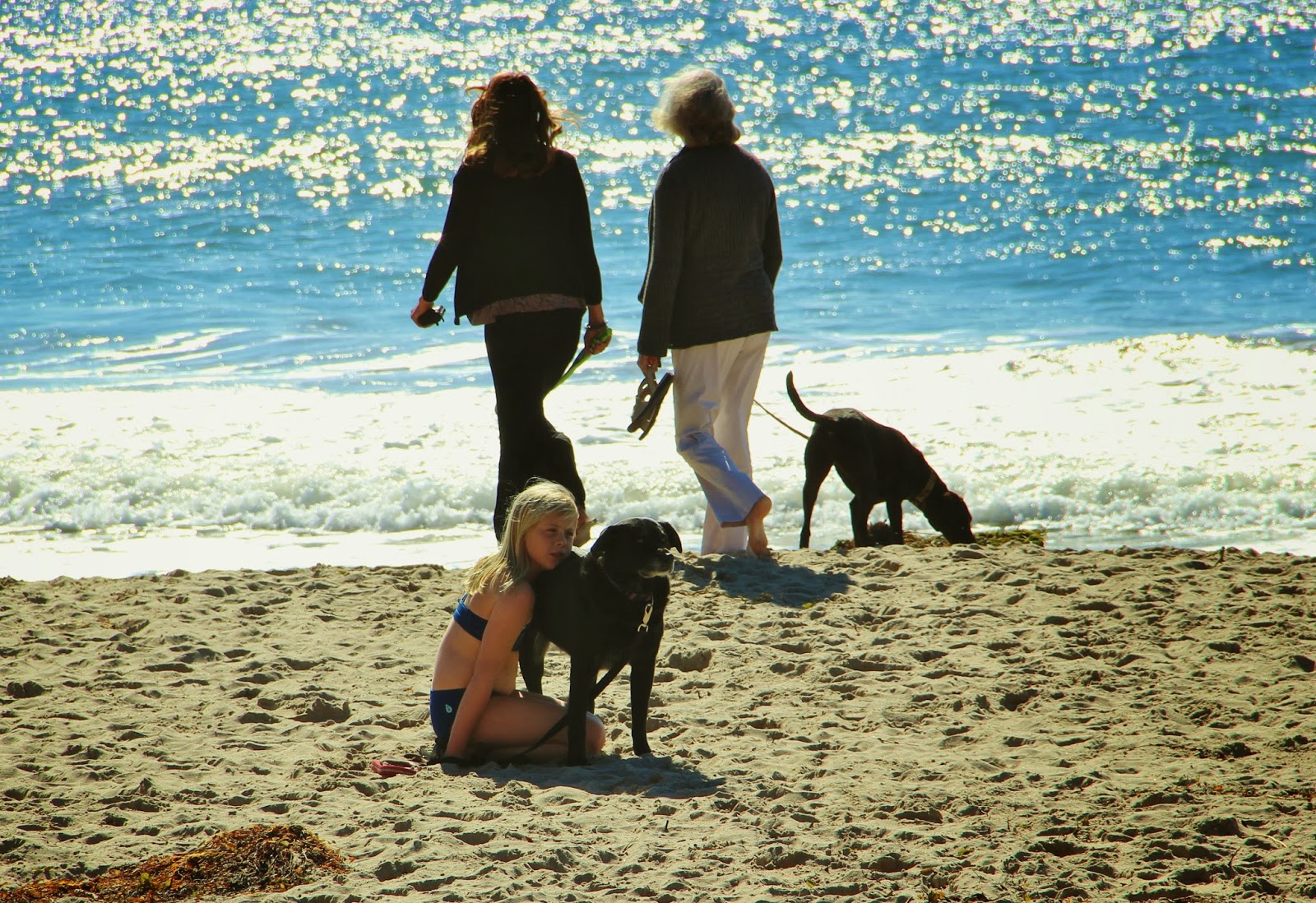 Most understood this mean the person holds the leash. 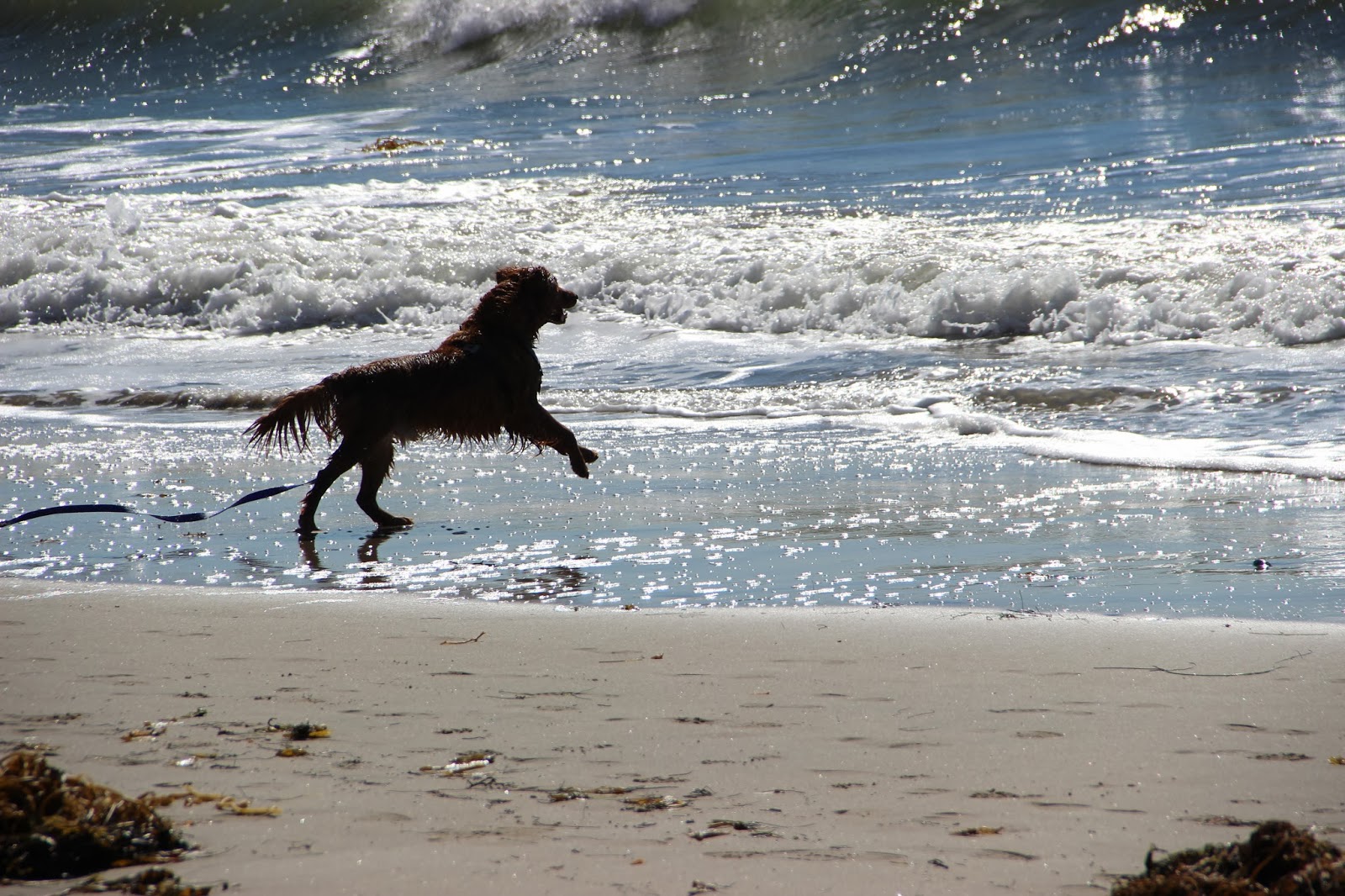 But some dogs had other ideas. 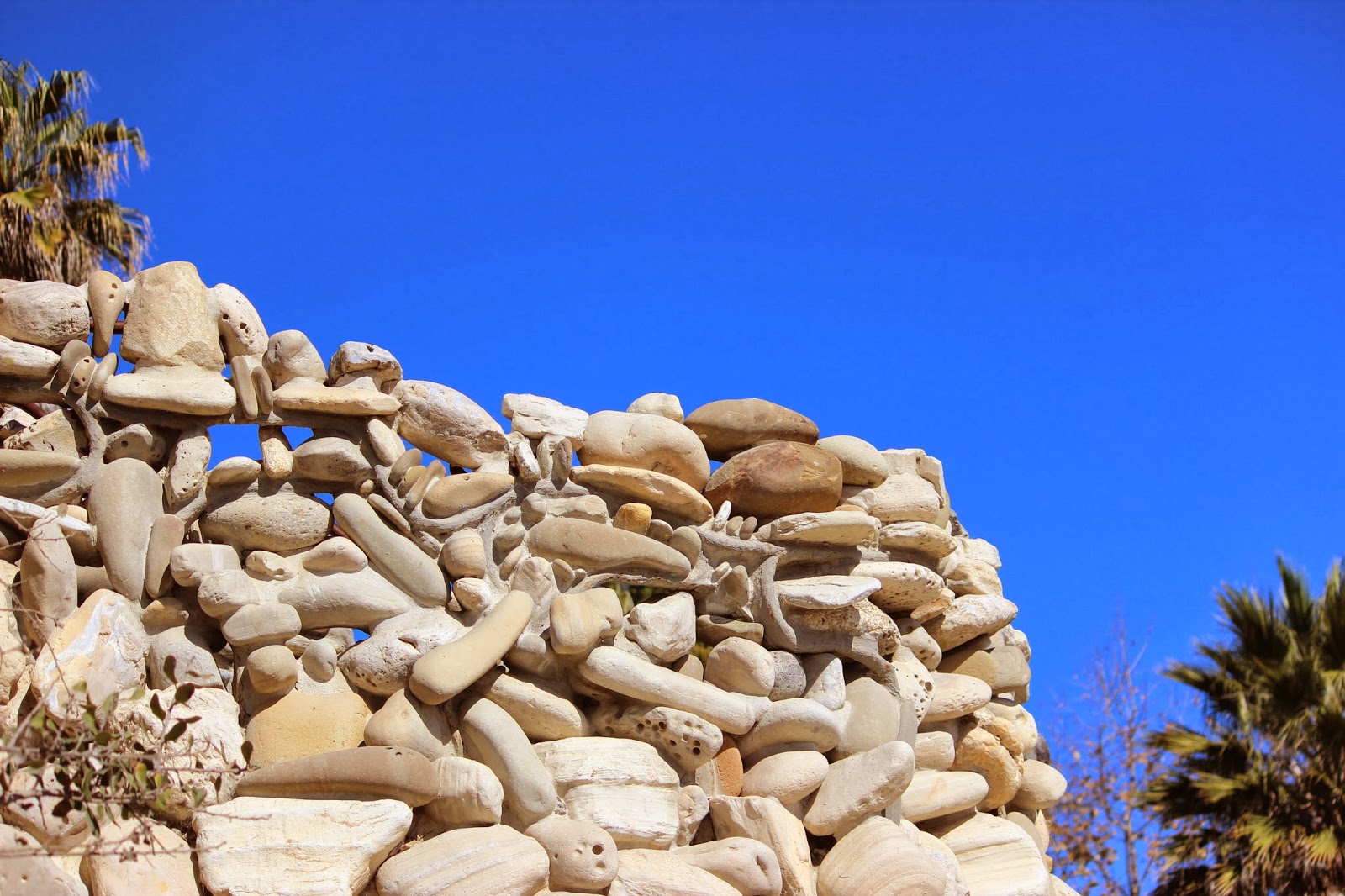 That Tsunami zone sign- in case of an earthquake- the path up the hill behind this sandstone rubble wall- I suppose that is where we would climb up with what might be our last drink in hand. If all went badly- the scenery for that last kiss would be incomparable. 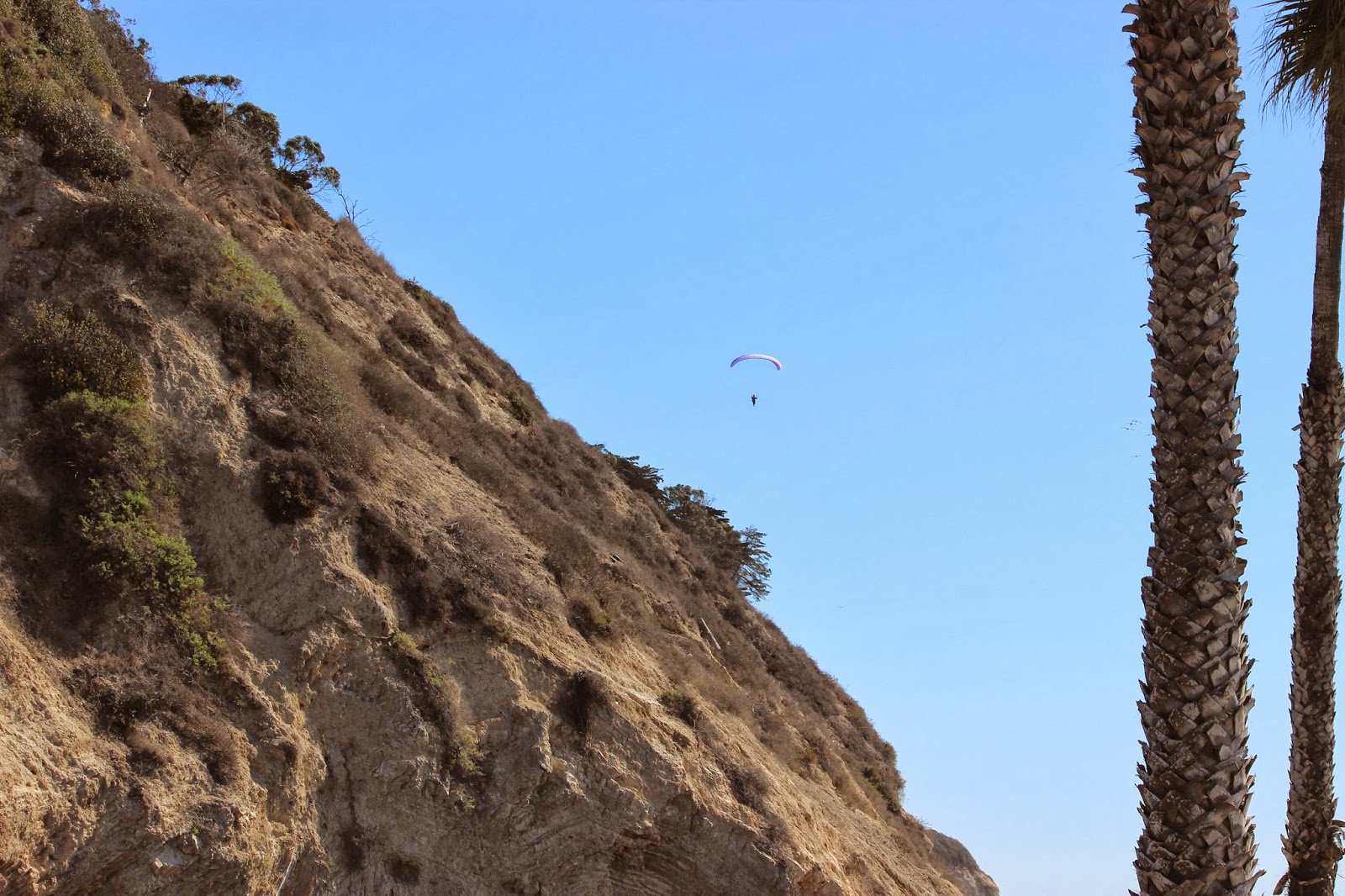 Look. In the distance. Is that what I expect it is? 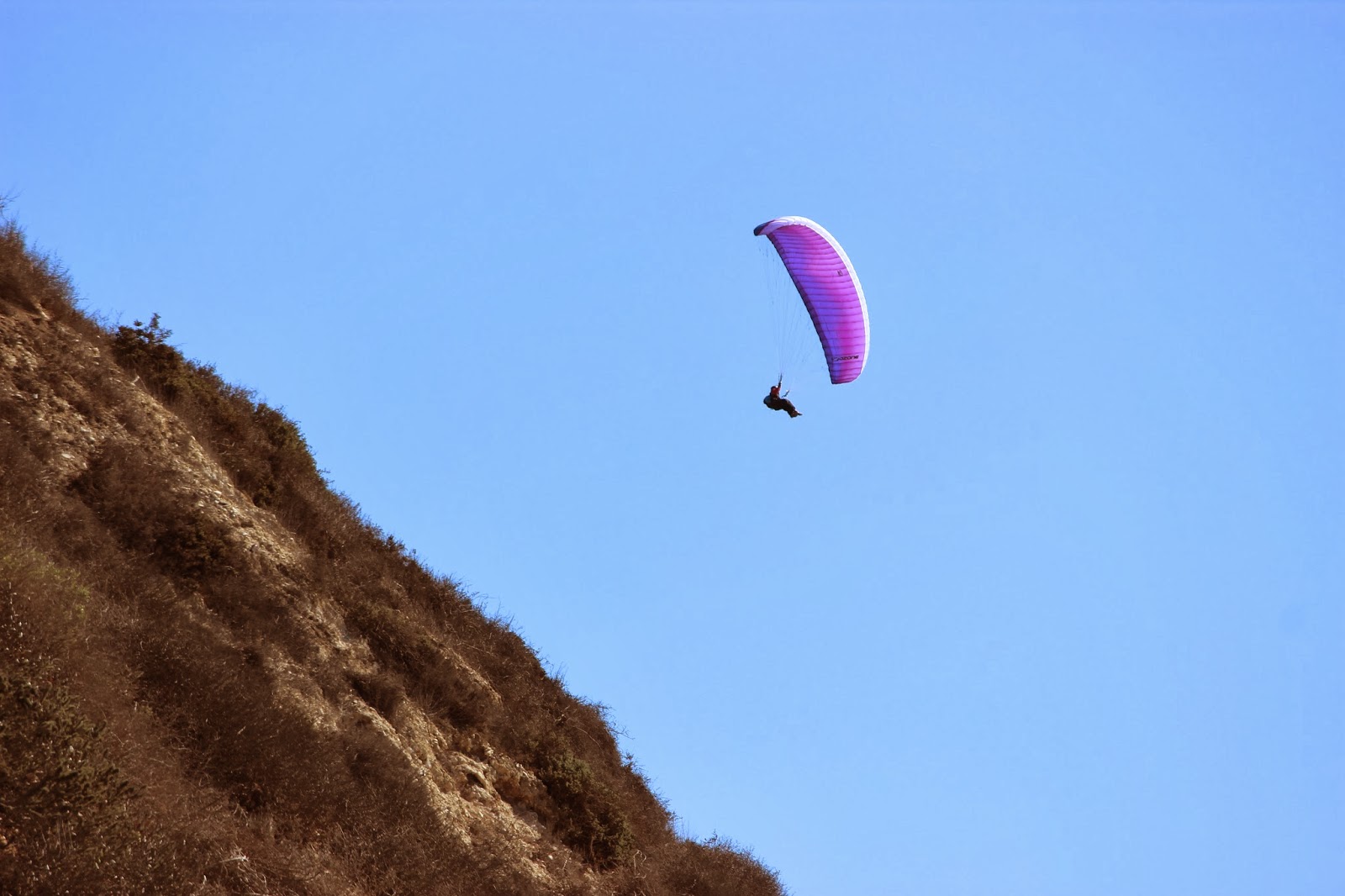 Yes. A plane-less pilot. A man tethered to a fabric wing. A human kite. 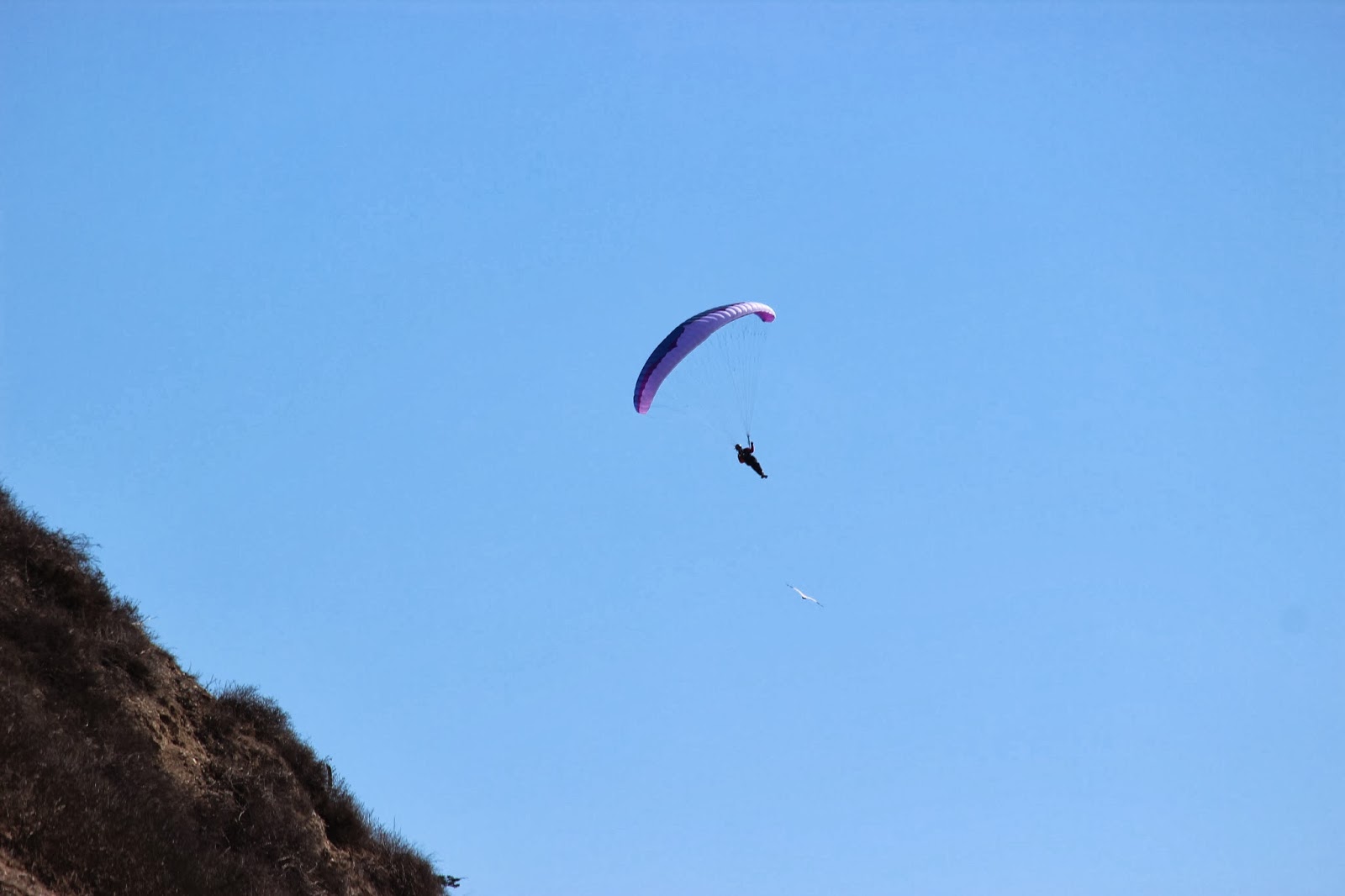 A para-glider, Quite a good one. 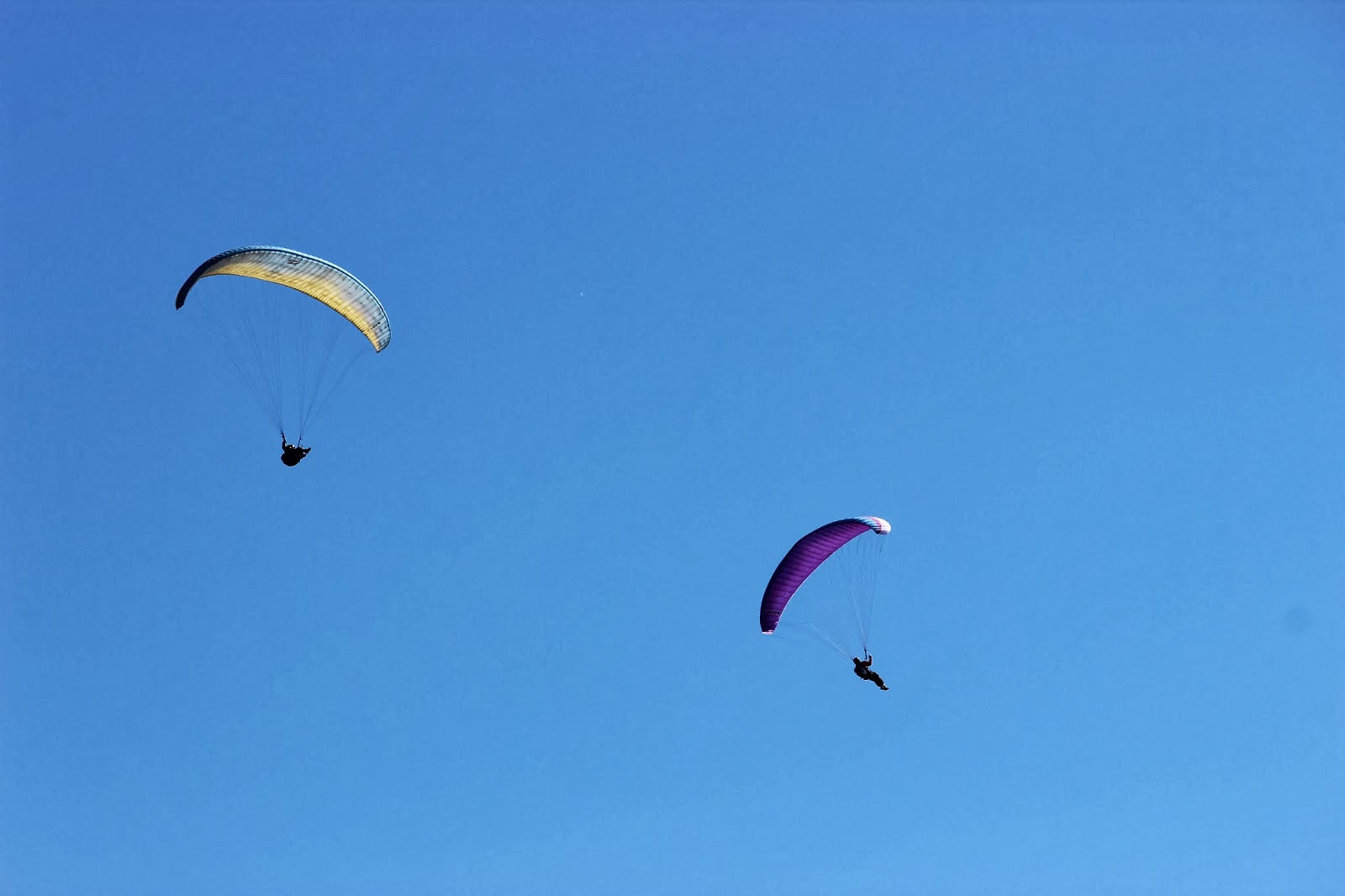 With company beyond inquisitive sea birds . 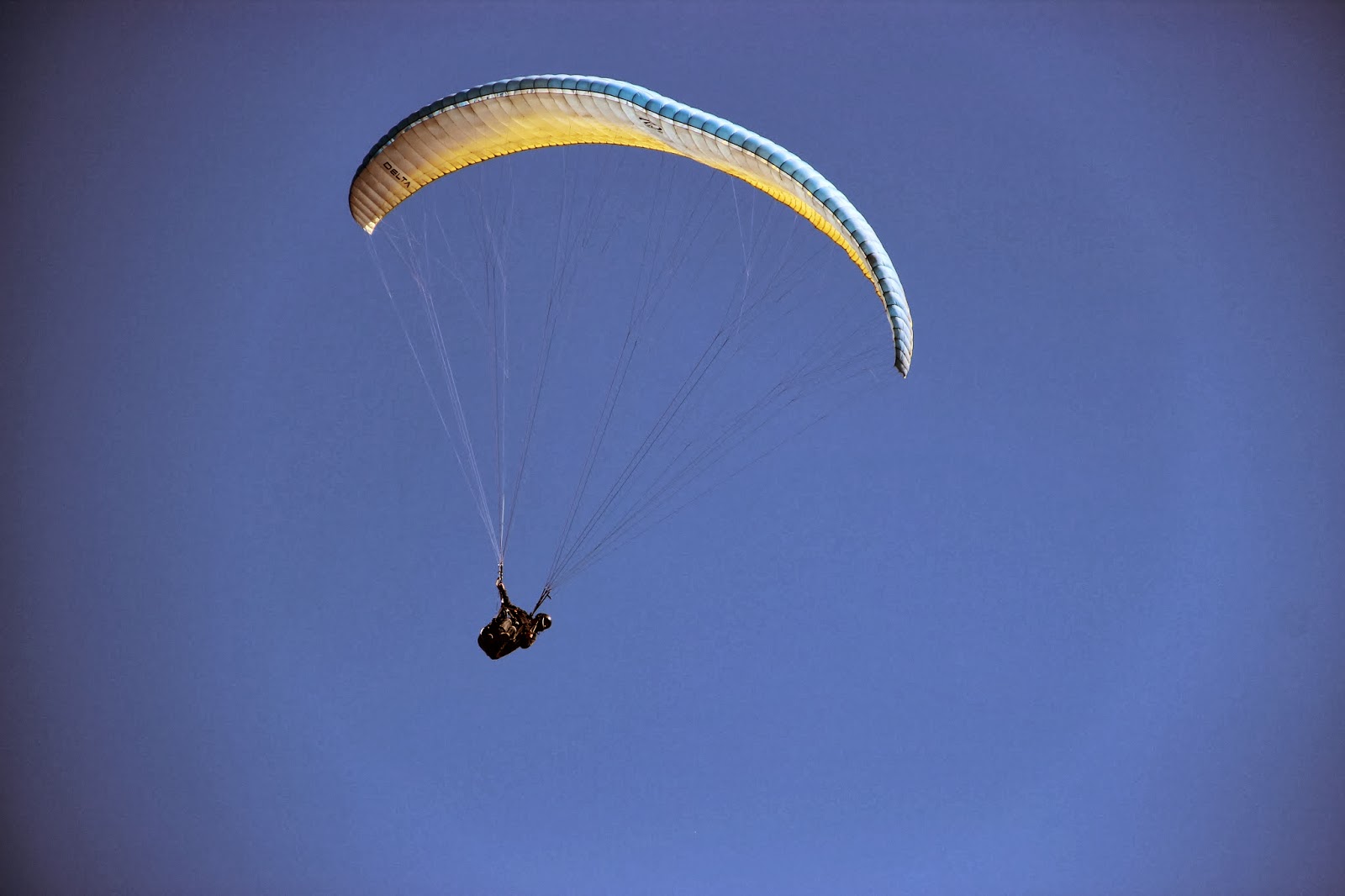 For an hour, we watched the men slide without apparent effort across invisible currents of a clear blue sky.

Most things are learned through trial and error.  A plant dies- it is compost. Fall from the sky- this is one sport I am pleased to stay a simple spectator.


More info on the beach here.

Thank YOU for all YOU do to make the world more beautiful.

What a neat place. Been years since I have been to Santa Barbara. Thanks for sharing. xo

Thanks for sharing that beauty with us. So glad you got to explore with Gerry.
Looks and sounds like you had a wonderful time!

Lydia, your blog today is making me more excited about my upcoming day trip to SB with my Red Hats club. The pics are gorgeous and can't wait until your next 'episode!'

We had so much fun. Thanks a zillion for all the organizational skills and help. Jeff and I loved every moment of our time together and we loved meeting Gerry (after all these years).

I love eating at the Beach House at Arroyo Burro. I just gave a talk at that nature center right behind the restaurant and we climbed the steps to watch the sun set.

Sending love to you,

Oh! Oh! Oh! Just gorgeous. I feel like I've had my lungs filled with sunshiny breezes!

I meant to ask you how your Saturday workshop went but, as you say, these eventful events can be difficult places to catch up!

What a BEAUTIFUL place, Lydia....Great pictures, too.
It's been many years since I was in Santa Barbara. I always loved visiting there and they used to have a wonderful Museum....
How nice for you and Gerry to have this special time together....That is a very very special beach.....!

Thank you everyone for writing in.

Nikki - We are going to reschedule the Saturday class to a later date.