"What I gained by being in France was learning to be better satisfied with my own country."
~ Samuel Johnson
(1709- 1784)

WWI. Katherine Kissinger served our armed forces as an ambulance driver. In France, she met Lt. Colonel Lansing Beach. After the war, the newly married couple settled into happily-ever-after in Pasadena, California. 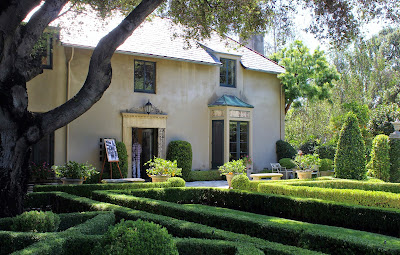 It was 1927, the heart of the Period Revival Era. The ambiance of the Arroyo, graced with with craftsman houses and an abundance of trees, was the perfect locale to spend the rest of their lives together.

The architectural team of David Witmer and Loyall Watson were hired to bring the charm of where the couple fell in love, French Countryside. to the home. Witmer, with military connections, was co-chief designer of The Pentagon.

The simplicity of design is the perfect foil to what my friend Alexandra, who lived in France for several years, describes as modern French  fashion aesthetic. The emphasis of is on the quality of materials, eschewing superfluous  ornamentation.


In 2011, Rhett Judice and Brad Hanson bought the structurally sound home  and set about restoring the homes and gardens. Ever respectful to the past, the home's signature graciousness is ever-modern. 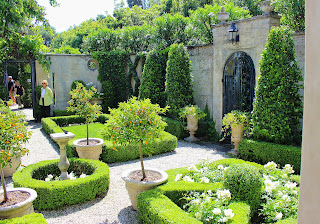 Parterres comes from the French word for "on the ground". This formal style of  largely level and symmetrical gardens designed on axis  where the geometry is defined by gravel paths is largely credited to Claude Mollet. 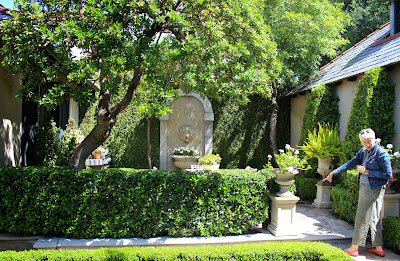 That was 500 years ago. The style's straightforward clarity of design makes it relatable across millennia.

A garden should never be viewed in one go. Like an interesting person, it should have a bit of mystery. Little nooks, such as the walkway toward the guest house, offer delightful diversion.

The Parterres offers several lessons in the opportunities for successful artistic garden expression. 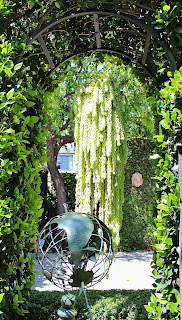 Foreground. Middleground. Background. The elements of this vignette extends the visual size of the scene past the global armillary, through the arch, letting the eye rest on the donkey's tail sedum. 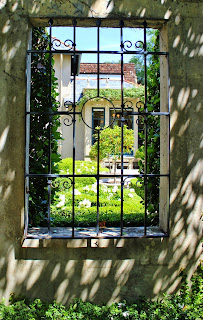 The grillwork opening in the garden wall allows the garden and home to literally be seen as a framed work of art. 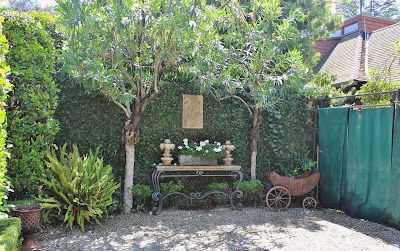 The service area at the end of the gravel driveway is treated as a destination point. All gardens have storage best kept out of site. The curtains on the right- inexpensive and effective. 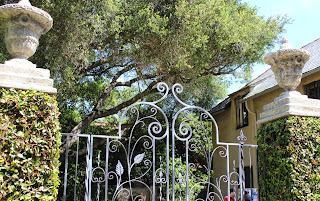 In 2014, the City of  Pasadena recognized the ongoing importance of the property with a landmark decision under the Mills Act.

Rhett Judice specializes in Interior Architecture and Design.  He is well-known for his restoration and decoration of church interiors. He can be contacted here

What a lovely and interesting home. Thanks for sharing. xo

An amazing property. Thanks for the bit of history and a view of the restored garden.

Thanks for writing such a great article about our house Lydia. You did a great job! And wonderful pictures too. Best wishes, Brad Hanson