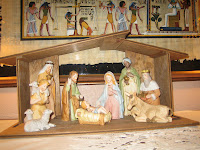 Carolyn Wassenaar shared this poem in a Christmas card.

The first Christmas decoration we bought when we moved in to our current home was this nativity. It is the first decoration of the season to come out. A physical reminder of why Christmas is important to us. Even in lean years, when we fretted if there was a reason to celebrate, it was displayed. A prompt that just being able to publicly acknowledge our faith, let alone celebrate it, is something many people in this world would give everything for.
Our manger display wandered about the living room each year, as I sought a permanent place where it would have the most spiritual impact. When my husband returned from Egypt with a papyrus rolled up in his suitcase, we had it flattened and framed. And it was clear that in front of the souvenir art work was the perfect home.
Our papyrus is the pictorial account of the complex thoughts the ancient Egyptians held about the afterlife. As Christians and other monotheists do today, they believed that death is not a final stopping point, that death is simply a transition point to the afterlife.
I like that the papyrus scene rooted in Egyptian culture is behind the manger scene. For shortly after Jesus was born in Jerusalem, its ruler, Herod the Great, was visited by the Three Kings also known as The Three Wise Men. Shortly after Jesus’ birth they sought to worship him. During their journey they came to ask King Herod if he knew where the newly born Jesus,” King of the Jews” could be found. Cunningly, he said no, but asked his visitors to return with the newborn’s location, that he might worship him, too.
The Three Kings agreed. But in a dream, an angel warned them that Herod was insanely jealous and intended to kill Jesus. So after finding and honoring the newborn king, the Wise Men found an alternate route home.
Herod was enraged. He initiated the Massacre of the Innocents, the infanticide in his kingdom of all male babies under the age of two. However, before Herod’s assassins could reach Jesus, an angel appeared to Joseph, Mary’s husband and Jesus’ guardian, with a warning. Take Mary and the baby to Egypt, where they would be safe.
At that time, Egypt was a part of the Roman Empire, not subject to the rule of Herod. It was also then, as the United States came to be in modern history, a place of multi-cultural and religious tolerance.
The family entered the country at Rafah, where, according toAl-Ahram, a weekly Cairo publication, a lone and ancient sycamore tree is said to have survived since the Holy Family’s visit. They were relatively safe from Herod while in exile, although they had to keep moving to stay so. It is believed that Joseph took his wife, Mary, and the young Jesus back to Israel, when it was safe. This is commonly believed to be after the death of Herod, when Jesus would have been about four.
The story of the flight to Egypt is found in the New Testament, Matthew 2-16. There are miraculous stories about Jesus’ time in Egypt told within the text of the New Testament Apocrytha, including stories of date palm trees bowing in homage to the baby as he passed by. This part of Jesus’ history is repeated in the Quran (Sura 19:4).
Posted by Lydia at 6:31 PM

Thanks for sharing that beautiful story, Lydia! It made me feel a little less guilty about not being in church this morning! Love Bible stories and how interesting that the story is also in the Quran.