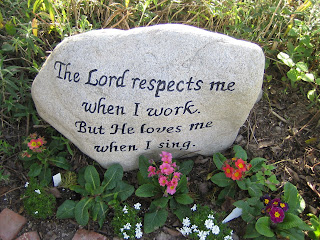 Simple words strung together have power to change a life.


My father quit his job when I was in sixth grade. He thought with over twenty years of experience in his field, it would be easy to get an other job. It wasn't.

My mother came to the mainland from Puerto Rico in her twenties. Fortunately, she came here an educated woman. My mother went to work as a teacher when my oldest sister was looking at college catalogs. While there were financial concerns, we were certain that my mother would not be laid off. The mortgage, the grocers and the doctors could be paid. We were far from rich, but we were safe.

But my father's extended unemployment left me with an almost irrational fear of poverty. From the day I was 12 I worked at any job I could. I babysat for a wealthy Realtor who once actually offered to pay me in jam: his wife made sure I got cash. Fifty cents an hour. I cleaned houses and ironed for other people. It was honest work and honest pay and I liked the feeling of pride that came from being able to pay my own way.

It also left me over-concerned with financial stability at the cost of all else. By the time I was a junior in high school I managed to land a job as a waitress for the now-defunct coffee shop, Sambo's. Working for tips was pleasurable. There was a direct relationship between the work performed and the money I earned. It was very good money for someone still in their teens. At the time I lived at home, had a car that was paid for and made more money than my mom did as a teacher. I had a cushy savings account.

I was quite full of myself. But because I never said "no" to an extra hour pushing pancakes,I worked myself in to a lonely position. During a time when I was growing dangerously sad, an other waitress, Becky, gave me the gift of a little parchment with the quote on it, "The Lord Respects Me When I Work, But He Loves Me When I Sing."

That little piece of paper changed my life. Before her gift, I was a Pharisee, trying to earn God's respect. I still worked hard. But I also took in the meaning of what it means "to sing". I learned to express joy and gratitude and to be loving. I took days off of work and didn't rush to fill them with chores. This new attitude resulted in a richer life than I could ever have earned. For when we "sing" we make room for God to fill our lives with grace.

I kept the quote with precious mementos through my life. Thirty years after Becky gave me this quote, the words in typed calligraphy, a local stone carver wanted to do something for me because of a story I wrote. I told him that I had always wanted this saying engraved where I could see it. On my anniversary, the stone carver unloaded the boulder with the powerful words carved in to the side. It sits prominently in my front garden, a reminder of keeping priorities straight.

Every time I read the words, I think of Becky and how precious her friendship has always been to me. Even when we have been separated by miles and years. She has always been there when I needed a friend or a reminder of God's love.
Posted by Lydia at 10:46 PM

Email ThisBlogThis!Share to TwitterShare to FacebookShare to Pinterest
Labels: Faith, Freindship, lessons from the garden

Lydia,
That was just lovely!! Your words touched me. I don't know why but I have felt the same as you. Security has always meant everything to me. Maybe it was because I didn't really have a father and my Mother worked hard and put me in boarding schools. I hated that but understood that she wanted to keep me safe while she worked. It left a VERY strong need in me to have a real family of my own, be a wife and a mother and that's all I ever wanted out of life. God smiled down on me. He allowed me to pick a man when I was just 15 and marry him when I was 19. I have always laughed and said I can't stand the china, crystal and silver I picked out at that age but fortunately I did pick the right guy to marry! Yes, God has been good to me. John worked hard and allowed me to feel secure and safe. I saved and pinched pennies because, like you, I had a fear but I don't know why. Maybe it was because I felt abandoned as a child in boarding school and related that to having to work hard to make money. I was determined to keep my children close and be a stay at home Mom. My dear hubby made that possible.
I worked hard at home but as you did, I learned to "sing" and enjoy along the way.
That was a lovely story and thank you for sharing it with us!
XO Trisha