The phrase “sustainable living” was kidnapped in its youth from kitchen table vocabulary. It arrived in this century as lexicon stuffed with more political connotations than a turkey with dressing at Thanksgiving.
Michael Chiarello serves the authentic definition, transcending politics. He told the packed house of special guests at the pre-Grand Opening of his South Coast Plaza store that “It is quality that will last.” Living sustainably is living in the Napa style. Who is Michael Chiarello? In everything this Californian man of Italian heritage does, you will find his hallmark of lasting quality.
He sees himself as a farm boy from Turlock, with the ultimate good fortune to work in his calling: hospitality. He began at fourteen as a kitchen apprentice. From there began a lifelong quest to expand the definition of his calling and share his love of all things about the hospitality philosophy he is known for.
In this journey, he has been the Executive Chef of Tra Vigne Restaurant in Napa Valley and other award winning venues. He is the Emmy Award winning Food Network celebrity. He founded the Chiarello Family Vineyards. Now, he has founded the retailer NapaStyle . Log on to http://napastyle.com/home.jsp and see what life should be through the eyes of a man who believes, “The experience of cooking is as important as the meal itself.” NapaStyle is not about unfettered acquisition. It is unpretentious gracious living. It is a design sensibility where form and function are equal partners. It is a life where at the end of day you put your feet up and let your hair down. It is casual and caring. The air is filled with storytelling from garden to kitchen to table. From one generation to the next, it is the “Chiarello way” that the rituals of family are hospitably passed.
Michael believes that food should be more than tasty- it should be flavorful. His Marinated Parmesan Dip- a condiment sold in handsome glass jars- isn't just wonderful with crackers and vegetables. Thinned with just a touch of cream, my family loves it fresh fettuccine tossed with it.
Living in the Napa style is seasonal. Growing up on the farm, Michael learned that it is best to pick and eat food at the peak of flavor. Use fresh whenever you can- and then preserve a plethora of culinary possibilities.
There are now four cookbooks bearing the Chiarello name. Last year, when Michael opened his Pasadena store, he was kind enough to ask a few questions and recommend specific titles for specific desires. For someone of his stature to take the time with an individual customer- that made a memory. Using these cookbooks has made more.
Napa style requires surrounding yourself with competent passionate people. 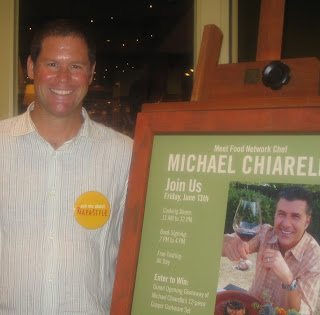 One of those people is James Franklin, the store manager of the South Coast Plaza locale. Formerly associated with Williams-Sonoma and Sur La Table- James would love for you to drop in. When you meet him, you will know there is a “host” gene: like Michael, James was born with it.