The Patient Shouldn't Have to Die

Before the State of the Union is delivered, I wanted you to be able to read this. Annotated  from a retired US Military friend., his situation clarifies the real life concerns about changes in health care commonly referred to as Obamacare. 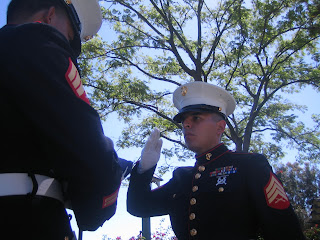 "It seems that TriCare just doesn't give a damn....... They are going to save money.


TriCare canceled all of my medications, yes, even all of my heart meds...

I have been on 'Brand Name' heart meds for 12 years because I have severe adverse reactions to the Generic ones. TriCare Insisted that 'Justification' be made for me to retain my Brand Name meds. 3 Doctors, with a combined 45 years of Education and a combined 135 years of experience in the practice of medicine and their written justifications were not enough for the admin clerk enforcing the New Rules for ObamaCare.

I have been cut off. Totally. Completely. Nada. Nope. TriCare did not say anteing except "NO" but they did recommend "Generic" drugs as the FDA has said that they are an 'equivalent" to the Brand Name drugs. It didn't matter that I am allergic to the Generic ones and have wound up in the ER a couple of times... I have lost 30% vision in my Left eye due to Amiodorone (Heart Med) and have various serious reactions to others.... etc............ ALL of which was spelled out by my doctors in their scripts which stated: Medically Necessary, NO Substitution, Brand Name Only".

They wouldn't even refill the scripts that they had originally filled to give me time to see my doctors and plan for an alternative treatment plan with newer drugs. Nope ! You're Done ! Next !
I have contacted my Representative's office and a very nice lady Aide is trying to make sense of it all, but even she is getting angry with the lack of common sense on the part of the Government change in the regulations !

I did receive a letter of apology from TriCare where they are attempting to cover their backside and scrape me off of their plate. The Aide, (name deleted), laughed and then she got pissed -- and got on the phone again on my behalf.
So........ I have 3 choices:

It seems that TriCare just doesn't give a damn....... They are going to save money.

If physicians are to be the gatekeepers of our medical care, it would seem the government should respect their judgement as to when a specific brand formulary is appropriate. The generic is not always equal. The patient shouldn't have to die to prove their case.

We promise health care for life to our retired military. Is this how we as a nation honor our promises to men and women willing to make as their career a job in which they have little to no say in where they serve while promising fidelity to our safety over their own?
Posted by Lydia at 12:01 AM

Email ThisBlogThis!Share to TwitterShare to FacebookShare to Pinterest
Labels: Government

Didn't you send this to Gator? It is infuriating the way a man who has served over 30 years for our country is treated! I talked with my mother about it and being the wife of a deceased military man she has ChampVA. After fighting with them about this subject of generic meds they have told her doctors, pharmacy, whomever, "Give her anything she wants". It's just the problem of finding the pharmacy who carries the name brands anymore!! I guess CVS is one of the few.
My prayers go out to dear Gator. I am sending his edited email on to our congressman. It will serve as an example of the horrific consequences of some parts of Obama Care!!

It's amazing to me that an organization known for its bureaucracy, red tape, inefficiency, and obfuscation would be championed by so many as the organization to solve a problem as complex as healthcare.

What a worse country we are giving to our children/grandchildren. I'm afraid that Gator's experiences are only the tip of the enormous iceberg.

Thanks for helping get the word out, Lydia. Those newly elected must change this attack on the greatest healthcare system in the world.

Trisha- copy sent to the gentleman we know by that nickname. Thank you for the nudge.

Perhaps this is the result of what happens when looking for something to put faith in- some people choose government.

Part of me wishes that it would be true that all problems are solvable in neat little boxes.

Life doesn't come wrapped in neat little boxes. Which is why a protocol that depends on that being a fact is bound to fail.

I've heard and read exactly the opposite.

It is such a shame that there are so many lies about health care. Lying is very unChristian.

With all due respect to the last anonymous poster. You have made an incorrect assumption that this story was picked up and passed on through the Internet. Not so.

This individual is known to me. The voracity of his claim was verified at the time.

His stated reason for not wanting his name known was that he did not wish to be harrassed. That is to say- have an anonymous person attack his assumed faith without basis.

My own experience with the VA- is it took aprox 18 months for the VA to recognize my mother's status as a WWII veteran.

There was an outstanding claim which the VA authorized on a Friday. She died the next day. The check was stopped and her claim died with her.

Such is the nature of bureacracy.

As difficult as fighting an insurance company can be- it pales compared to fighting the government.

He who writes the laws protects himself.

God bless the people who staff the VA. They are simply overwhelmed and without the tools to exercise common sense when the "boxes" don't fit the situation.

I stand by the integrity of this journal posting.

ALL of the information I provided about TriCare is true.

As a result of receiving a "Denied" on my 4 Heart Meds again the Cardiologist wrote New Prescriptions for the Meds at the request of the Congressman's Aide. The Doctor Re-wrote an in-depth Justification for each Med (again) and a new Prescription (again). This package was hand-carried to the Congressman's Office and sent via Courier to TriCare.

I have recently received another "Denied" on each of the Meds less one.

I have another appointment with the Congressional Aide this coming week.

In the meantime my wife went to the on-base pharmacy to get her meds refilled.
Upon checking in at the desk the lady told her that they will no longer be issuing or authorizing Brand Name Drugs and that the list of available drugs has been reduced and that she was to take a New Printed Formulary with her to give it to her doctor for him to know what was Now available.

Patient after Patient was told this and given a New Formulary.

Needless to say that there were a lot of disappointed patients that day including my wife as one of her meds was taken off the formulary. Now we will use a mail-order Pharmacy to save money.

Seems like another "Serve 30 years and Health Care is free for Life" promises just got broken.....

Gator- It's an honor to hear from you. So sorry the update is not better.

It is more common that commentators realize- not all formularies work equally on all patients.

The primary point of responsibility for health care should be of the doctor. The medical profession needs latitude to not just control costs- but the ability to work with a patient's individual history.