Move over Lawrence of Arabia. For 50 years you've been the benchmark by which all other movies are measured in my mind. You have now have company: "Les Mis".

This is a take a full box- of- tissue- with- you  movie.  Besides being gorgeously filmed, exquisitely scored, greatly cast and filled with little moments that grab the viewer away from the Epic film, this is a movie of great moral clarity. Who isn't hungry for that these days? 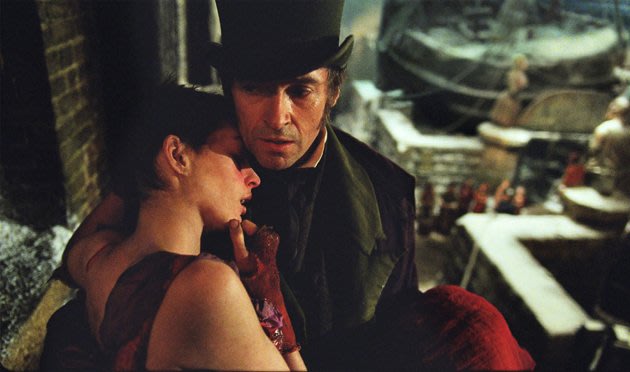 This photo of  Anne Hathaway and Hugh Jackman is from Yahoo movie review. If you are a fan of little factoids, click here and be happy.

Samantha Marks (as Eponine) and Eddie Redmayne (as Marius) are nothing short of astounding.  Their vocalizations alone are reason to buy the soundtrack.

The only thing which the movie could have used- an intermission. It's not like you can hit the rewind button when nature calls. Which in a theater with the thermostat felt like it was stuck at 27 degrees- putting off that moment until after the film was over was -well- distracting towards the end.

Which is a good reason to purchase the DVD the day it comes out. I will.
*the bottom photo is from the  movie website.

John and I don't care for musicals at all but after hearing everyone rave about it I have decided it is a must see for me. No so for John tho! :( So Becky and I have decided that she and I will go together one day for an afternoon showing.
Now to pick something for John and me to see tonight for our date night. I am thinking it will be "Lincoln".

Happy New Year! John can enjoy the movie from the comfort of your home when you can TIVO a break in. Gerry would have enjoyed the film much more if he could set the thermostat above igloo weather and had a couple leg stretches thrown in.

Dear Naomi- Fingers crossed you get a copy! The beauty of the music. So wonderful to hear the quiet and passion of moments expressed in words elevated by music.