Tragedy ~ The Last Dinner on the Titanic through Sandy Hook 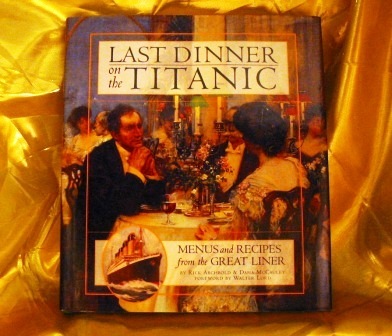 The Last Dinner on the Titanic is more than a review of the great tragedy of the Edwardian Age. More than the collection of recipes and menus of the different classes aboard the doomed ship, Rick Archbold and Dana McCauley created a beautifully illustrated morality tale. A sample-

"When all the lifeboats had departed, more than half of the Titanic's passengers and crew remained on the ship. One of those was the chief baker. Charles Joughin, who had passed a most eventful night. When first awakened by the impact, he had immediately organized a party of bakers to provision of the lifeboats with any bread they could find. Then he had helped load the boats and even bullied reluctant passengers into leaving the sinking ship... When all the boats were away, Joughin began throwing wooden chairs overboard for use as life rafts...

Passengers crowded to the stern as the bow sank... as the stern lurched and twisted and stood up almost on end. Calmly, almost nonchalantly, he stepped over the starboard rail and began climbing the side of the ship until he stood on the upended stern. He cinched in his lifebelt  as the ship began its plunge, steeped calmly into the water and swam gently away."

He survived several hour in the icy water. Presumably because copious whiskey- drinking acted as anti-freeze. Using the illustration of God as the Potter, we should be comforted in knowing even the most flawed vessel among us has the potential to rise to the occasion.

It was fortunate to have this book on the top of the reading list as our nation is united in mourning for the little children slain at  Sandy Hook Elementary School. We understand the pain  the old testament heroine recorded in Jeremiah 31:15 where

In the days to follow, once we are clear of the unreliability of breaking news, we will begin to tackle the many elements to break the trend in the US, where Fox News reported 13 mass killings were perpetrated in the United States this year alone. That statistic is alarming and "why" needs to be addressed in order to move on to "what" should be done.

The temptation will be to use the incident to move already existing and competing agendas.  To my way of thinking- in an age of expanding technology- all laws should be periodically reviewed for both effectiveness and current application.

Gun laws-  There are painful statistics to deal with. There are those adamant that stricter controls are needed. Why should it be easier in some states to buy a gun than it is to adopt a pet?  Others will point out that every household in a very safe country- Switzerland- gun ownership in the home is compulsory.

Mental Health- There are some things of the human condition that pass all understanding. To deal with this, we are going to have to revisit legitimate privacy concerns.

Cultural Desensitisation. The effect of incessant and violent realism in games, music, literature and all media on psyche of young children deserves serious inspection and revelation.  The value of how free speech should be will be a contentious subject.

Journalism. Criminals and perpetrators of evil are encouraged by reinforcing the desire to be famous over the desire to be good. The free press may not be anxious to expand beyond self-regulation.

Not everything that should be done can be done by the government. Only we, as  individuals, can give a hug. Only people can choose to make what might unknowingly be our last words to a loved one be positive.

Christmas is a US Federal holiday. But only people of faith can make the season holy. I pray that anyone who happens here do just that in remembrance  of all the children who ever died younger than whatever you are.

How I appreciate your last paragraph. To us, it is a holy celebration. And we look forward to the day when Christ will make all things whole again.

We do hold the children close in our hearts. ALL children.

I treasure knowing you and feeling your sensitivity.