"Brothers, what we do in life... echoes in  eternity. " Russell Crowe, as Maximus, in the film Gladiator

Elysium. In Greek and Roman literature, this was home in the afterlife. Paradise. Nicholas Staddon teaches how to live in Paradise. Here. Now.

Nicholas Staddon honed his brand of ode- to- garden -joy in his lifetime of travels and adventures putting him in continuous contact with nature. He's not a man to shrink in challenging horticultural times. He says " Truth be known, I've never seen more interest in gardening since I've lived here."

Nicholas's specialty is studying the evolving American Vision of Paradise. Then sharing it with eager audiences eager for heaven while still here on earth.  This is a quick history, of how the shadow of one man was shaped to influence this generation of gardeners.

His horticulture education began under Grannie Staddon. She  told him, when he was a wee lad, that "Plants are like people. Very social."

As a young adult, during the height of the cold war, Nicholas found a job putting the ancient art of Falconry to modern use. He explains "I was under contract to the USAFE … United States Air Force Europe. Working on the front line base to keep the runways clear of birds,
We were using falcons and other means to scare the birds away. At that time, jet fighters and bombers in the area were suffering numerous bird strikes, most of them happening during takeoff and landing."

He reports "Within three years of the falconry project commencing, zero bird strikes were being reported in the confines of the base perimeter."

It was time for Nicholas to do what Englishmen are known to do. Become a sailor. "I was working on privately owned ships, working the summers in the Mediterranean, then coming across to the Caribbean for the winter months. "

He was in Ft. Lauderdale when he found and fell madly in love with the woman he calls his bride.  The couple wasn't anchored to the Eastern coastline. Nicholas began his true horticultural calling by working in Albuquerque and Santa Fe, New Mexico.  His understanding of the range of plant materials, climate- and differing desires by every category of people- Nicholas's brain is a catalog of what is possible.

Landing in the Southwest, it was a time when it was trendy to uproot traditional gardens, replacing them with zeriscapes. Gardens became sparsely populated plots of ground with native plants whose stick-like in appearance flopped over.

The metamorphosis of gardening over the next 5 years yielded wisdom so helpful in our age of challenged resources. A garden is sustainable only if it is loved and loves you back.


Fast forward to now. The world has changed, but the desire for emotional satisfaction from a garden will be with us as long as there are gardens.

Nicholas sees this as a golden age of great opportunity. Gardens are not merely beautiful, but personal. They are ever more reflective of the enhanced value Americans insist from our outdoor spaces. Flowers are not just to be seen, they are to perfume the air and call in pollinators. We've relaxed a bit as consumers, we've learned to be okay with a few munched leaves if it means we can use less chemicals. 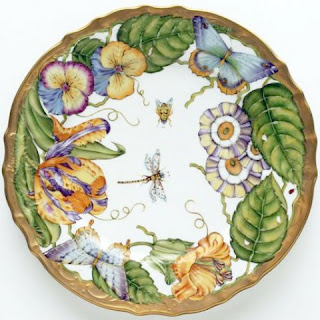 This trend  away from perfection is reflected in high -end dinnerware by Anna Weatherley. A single plate retailing for in excess of $500 each, the leaves are painted with  signs of bugs having dined on foilage. 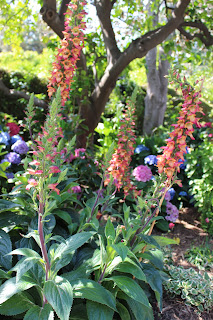 Whether your taste is like this  shaded side yard in Sierra Madre, or the golden tones set off by green cypress on the top image (we'll chat about a truly marvelous one for today's gardens shortly) shout to heaven that we live here. Now. Where most problems have solutions so that personal gardens can be places that will live on after us, shaping generations to come.

Speaking of cypress. Here is the closing scene from Gladiator, when the classic tale of good vs evil ends with the centurions lift the dying general for his trip to meet his family in Elysium. A scene that as the general's hand sweeps through the wheat field... when Nicholas' bride began to weep ... Nicholas did what plant geeks do. Express astonishment that she was weeping when, by golly, there was this astonishing stand of 150' high Italian Cypress on the screen.

Thank you to the entire crew at Village Nurseries Landscape Centers, which made this 3 part series possible.

Until we meet again, Thank You for all YOU do to make the world more beautiful
Lydia

Europe never changed gardening style after WWII due to high gas prices. They did not have the luxury of cheap fuel for greenhouses/transportation/etc nor the mindset of USA throwaway culture. More, their gardens never separated ornamental horticulture from agriculture.

Horticulture college, USA, trains future mow-blow-go landscapers how to make a buck off each phase of a garden, on contract. Shrubs need pruning, annuals replacing, lawn mowing, chemicals throughout the year, mulch replenished.

After engineering degree I got one of those ridiculous USA horticulture degrees. During the process I knew I wasn't learning proper gardening. Off to Europe for 2 plus decades, studying historic gardens.

Been designing/installing historic gardens with my team for 3 decades. No chemicals, no irrigation, no fertilizer, no lawns instead Tara Turf, aka low meadow, deciduous trees to shade in summer/heat in winter, evergreen trees to block winter winds, focal points on axis, friendly to pollinators, increasing property values, decreasing HVAC expense.