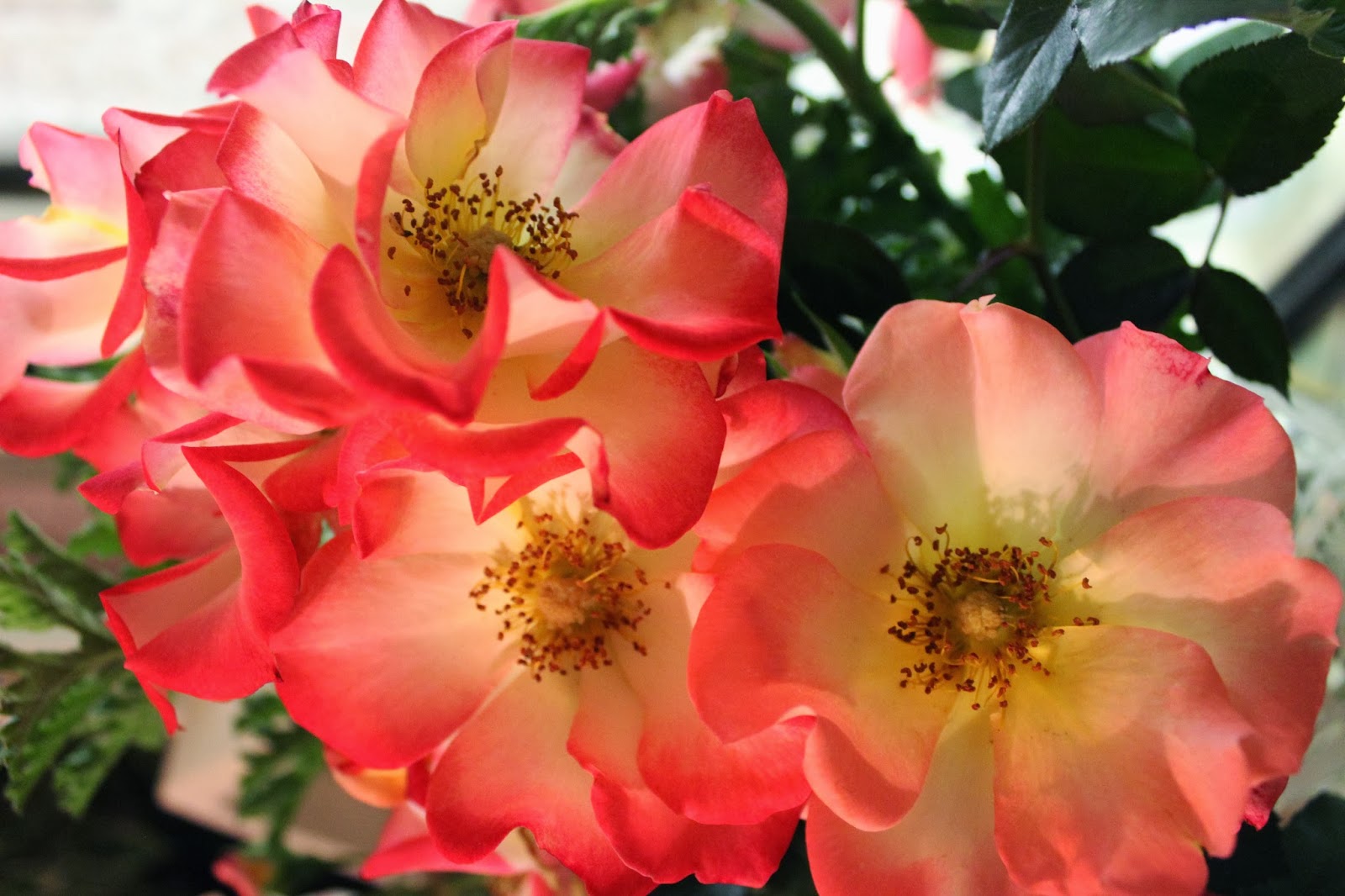 Welcome to rose pruning season. Before the sequiturs sever the umbilical stem between flowers and their mother plant, vases are filled with water on the counter.   Making bouquets for friends is how I work up the nerve to clip away. 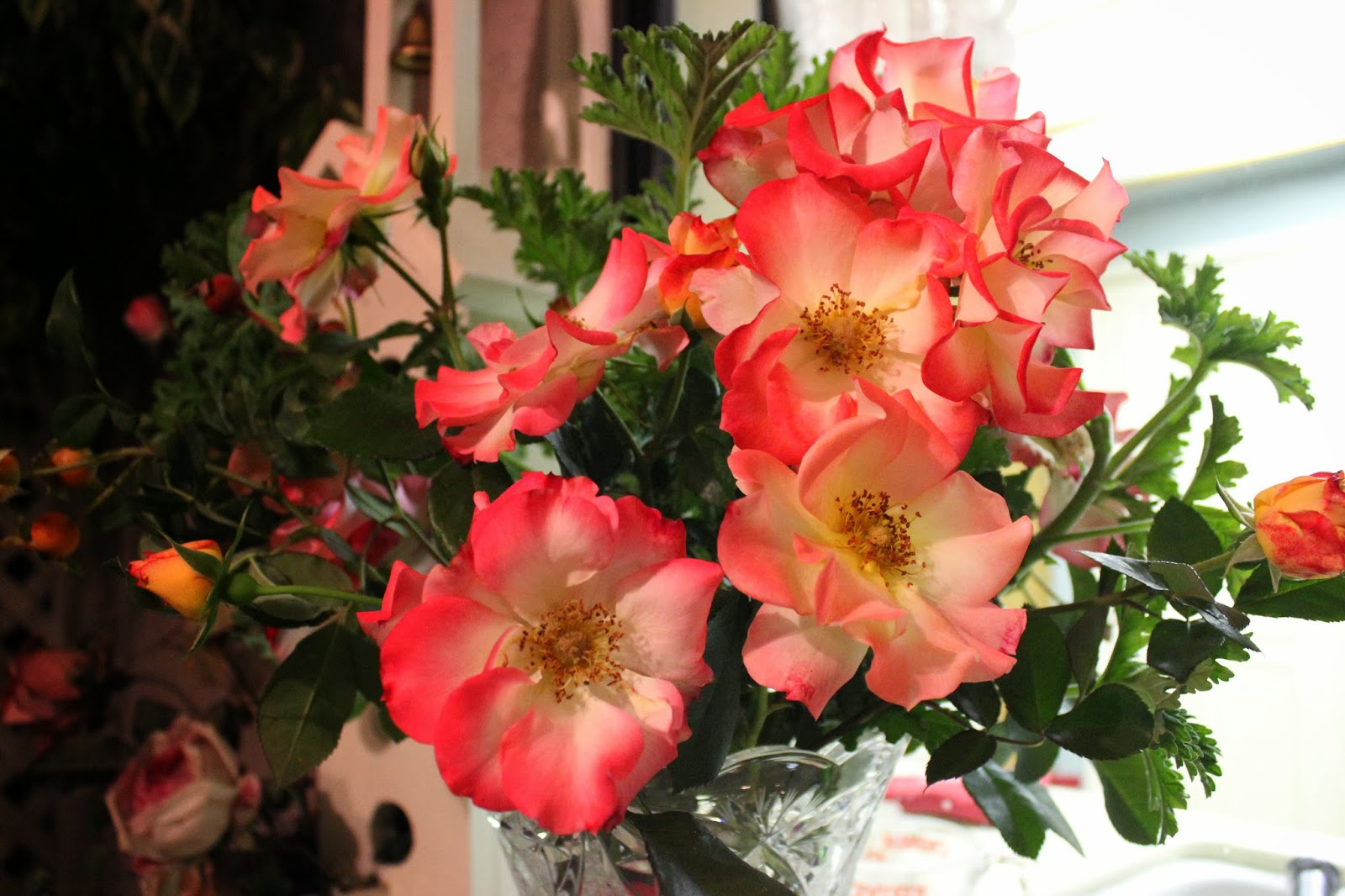 These bouquets are not 12 of this and 7 of that. They are simply compositions of what roses refuse to take a seasonal siesta in the Southern California's gentle climate.

The flirty single flowers of 'Betty Boop' didn't quite fill out the vase, so some stems of scented geranium  clippings and rose hips from the towering 'Graham Thomas' were inserted into the arrangement.

In delivering flowers to our friend, Trisha, Edda and I picked up a candy bouquet for her grandson, Matthew. Everyone was happy. 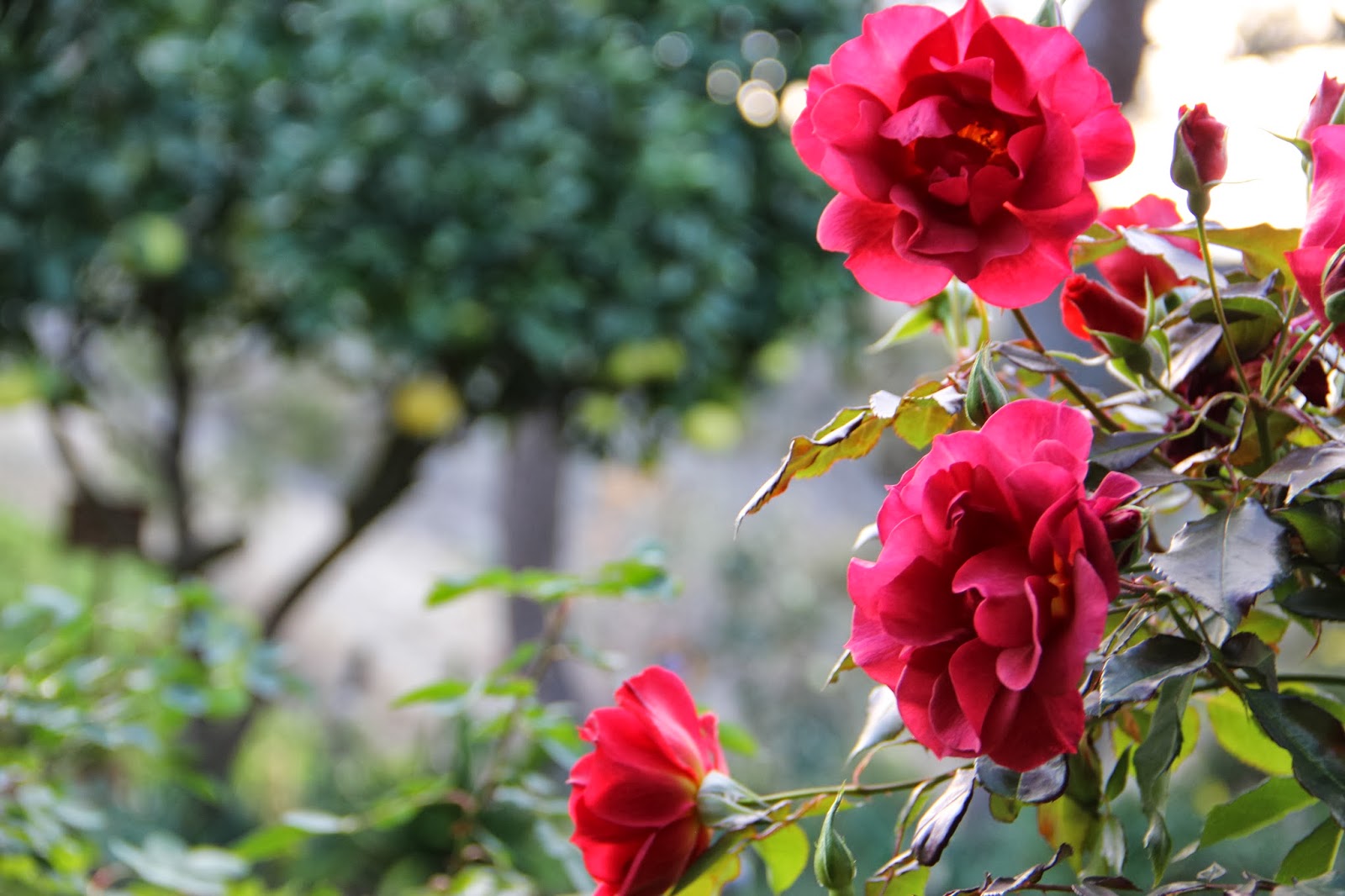 With temperatures in the mid-80's this week, it is important to roar through the pruning. As the last time I rushed this job, I ended up with a broken arm (don't ask) it is really nice that a college student from Cal Poly both likes gardening and making a bit of spending money.  There is absolutely no way 'Cinco de Mayo' can be ruined- so that is where Sal's training began. Someday he'll make a fine engineer- but for now he is an absolutely delightful shadow in the garden- one who quadruples the amount of work which gets done in a single day. 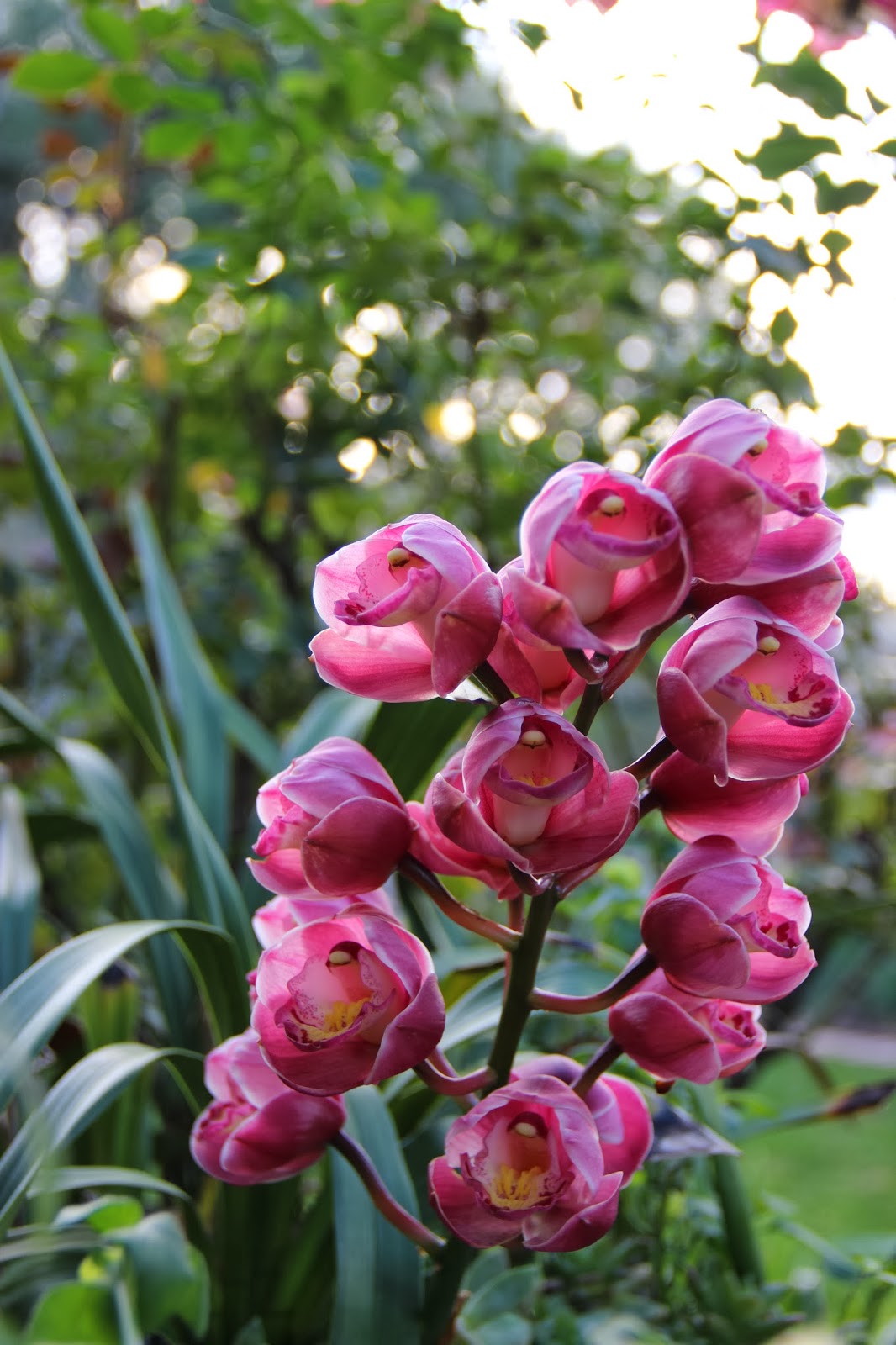 There are orchids potted up about the garden- but there is one magical spot where the flowers leap higher and more voluptuously than even 3 foot away. 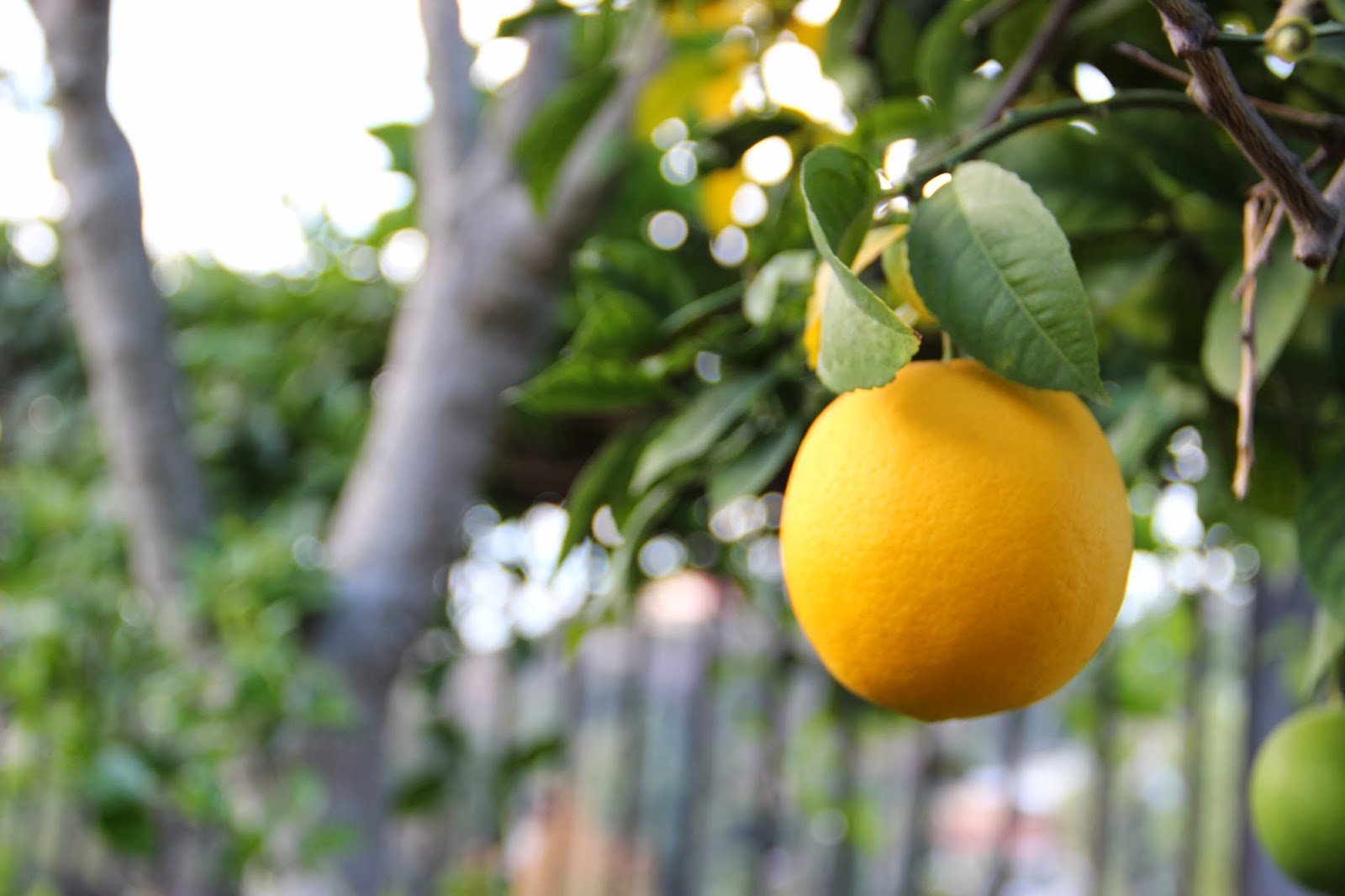 To my snow-bound friends and relatives- reaching for citrus from your garden is just as delicious as it sounds. 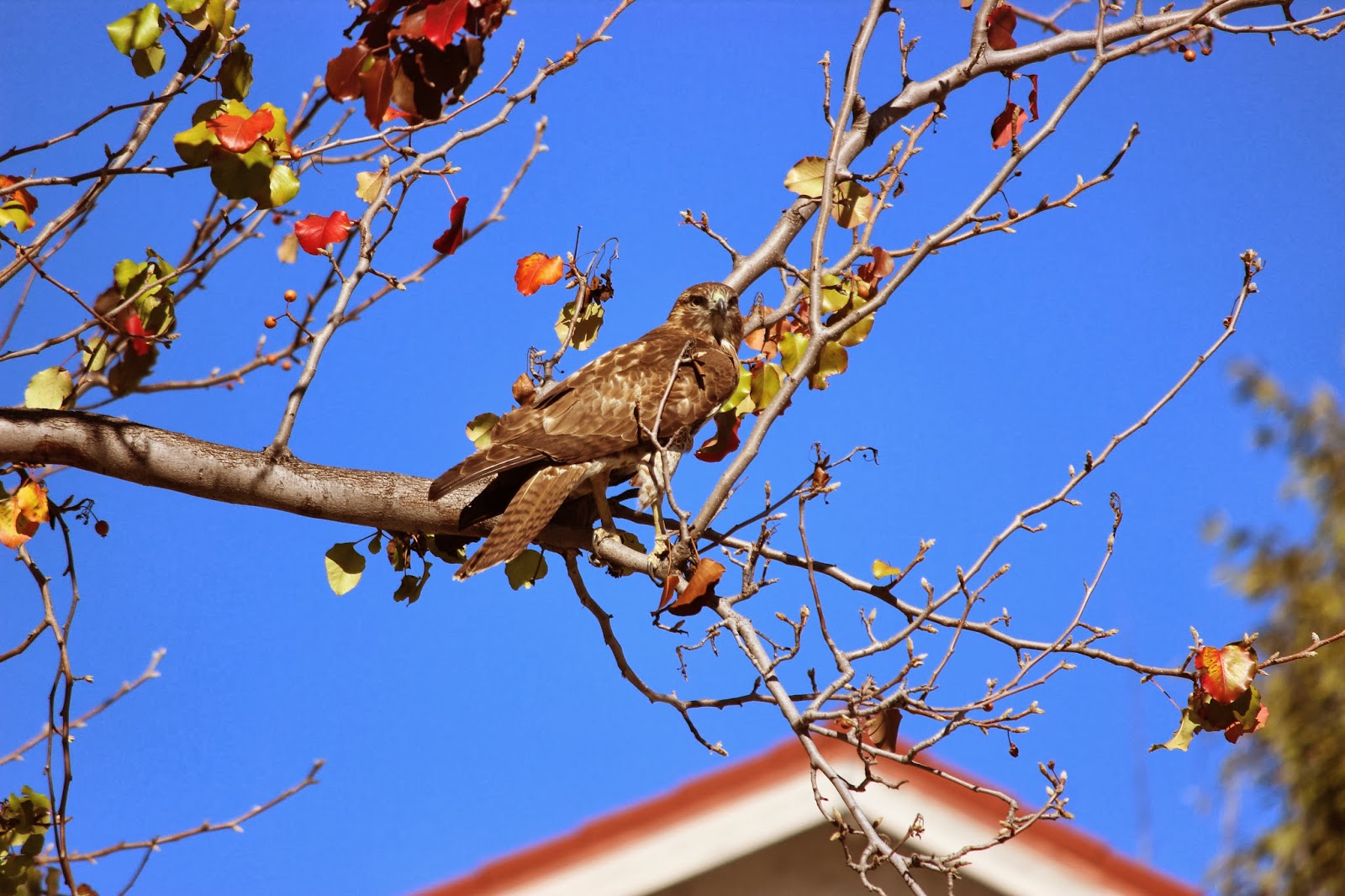 Sal noticed this hawk watching us prune. Soon the hawk was watching just Sal prune. I deserted my pruning post in a race to dig my camera out of my study, rearm it with my telephoto and hunt the bird of prey with my lens. 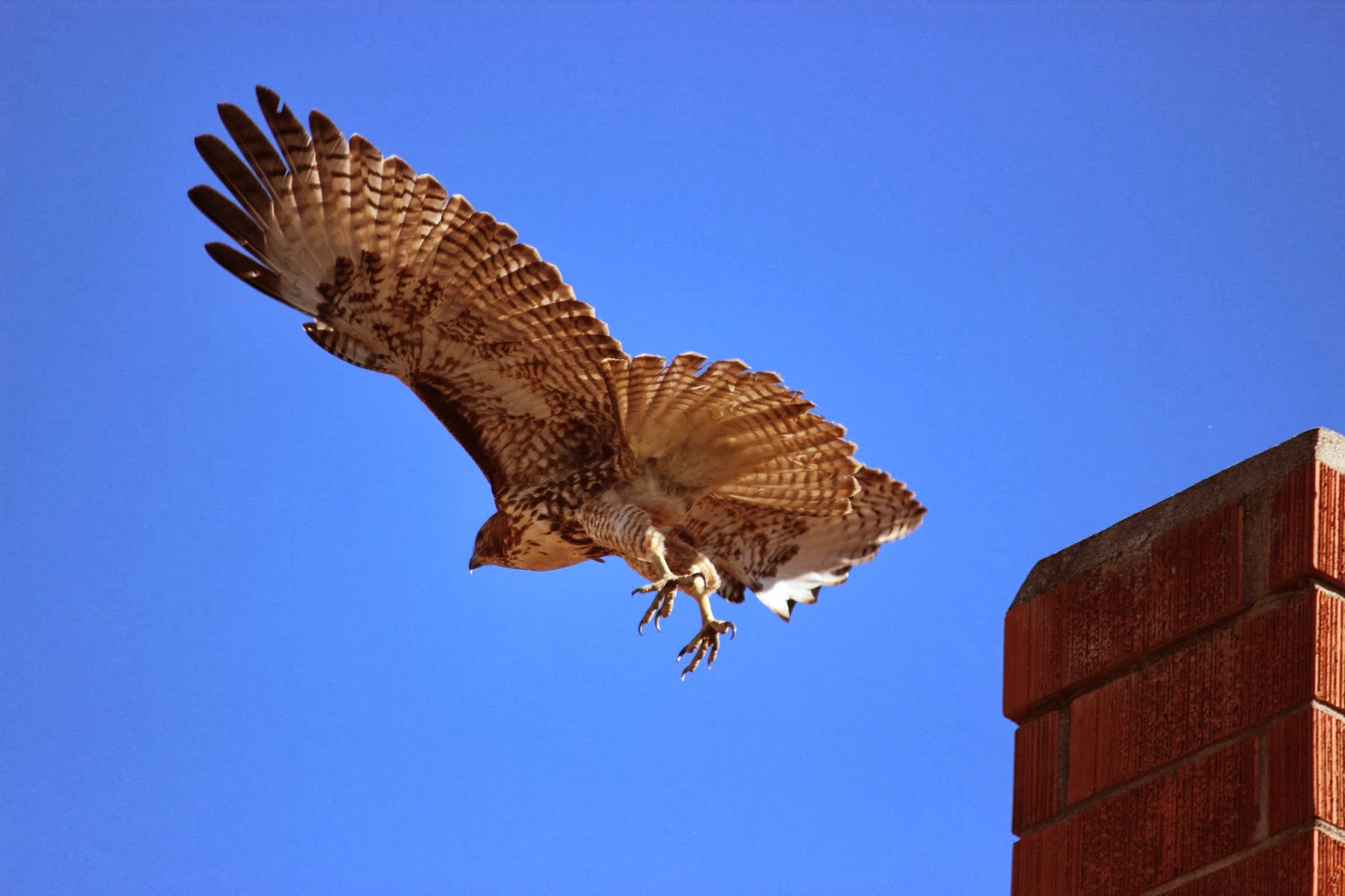 Mr. Hawk was soon annoyed with all the attention and flew off. 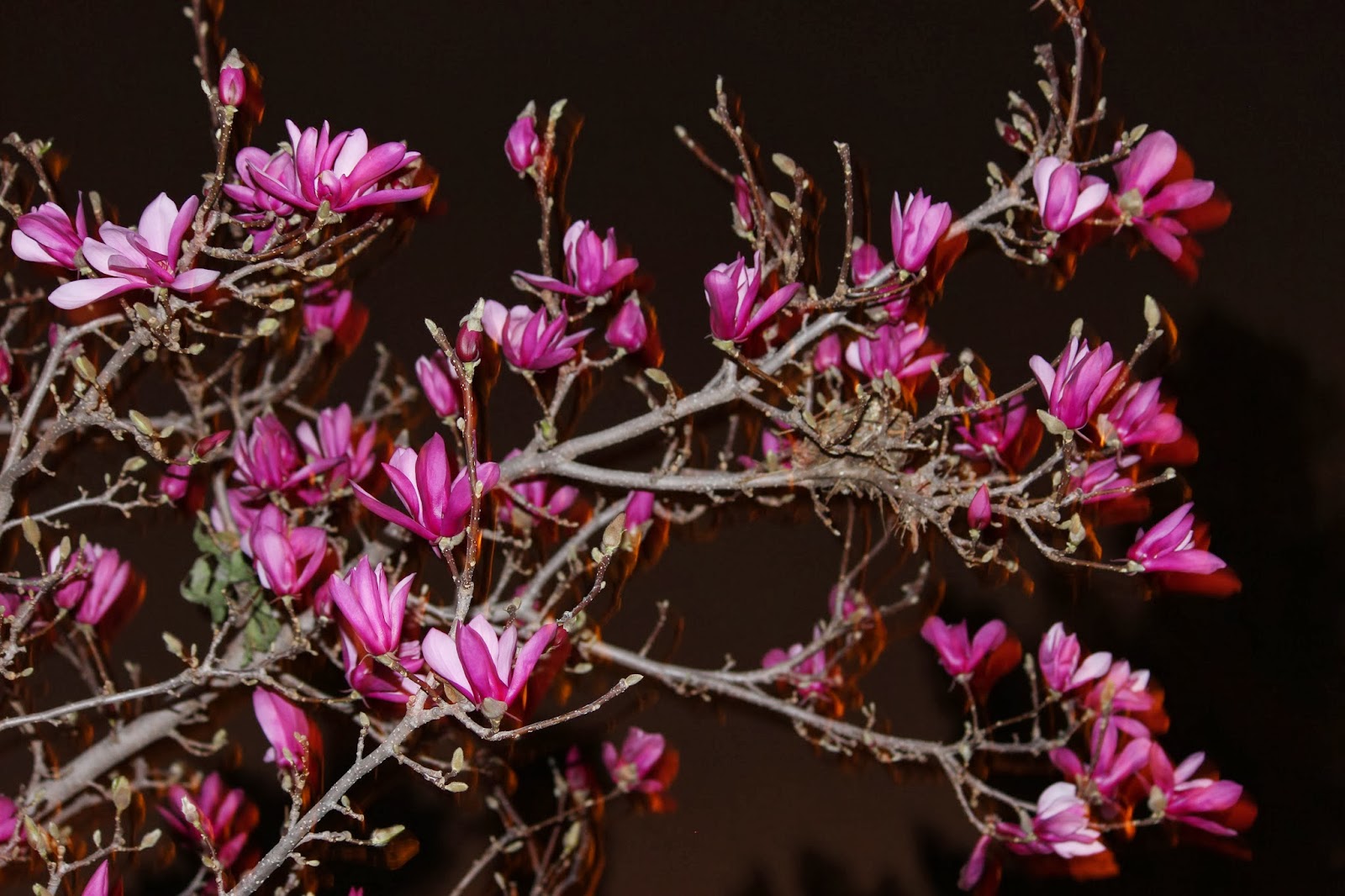 There is a different kind of magic in the garden when the moon rules. The magnolia 'soulangiana', it was love at first site, when as a newlywed in Lakewood, there was one lovely specimen in a garden on my short commute to Cerritos.

The loveliness of the pink and magenta flowers - they define the difference for me between yard and garden. 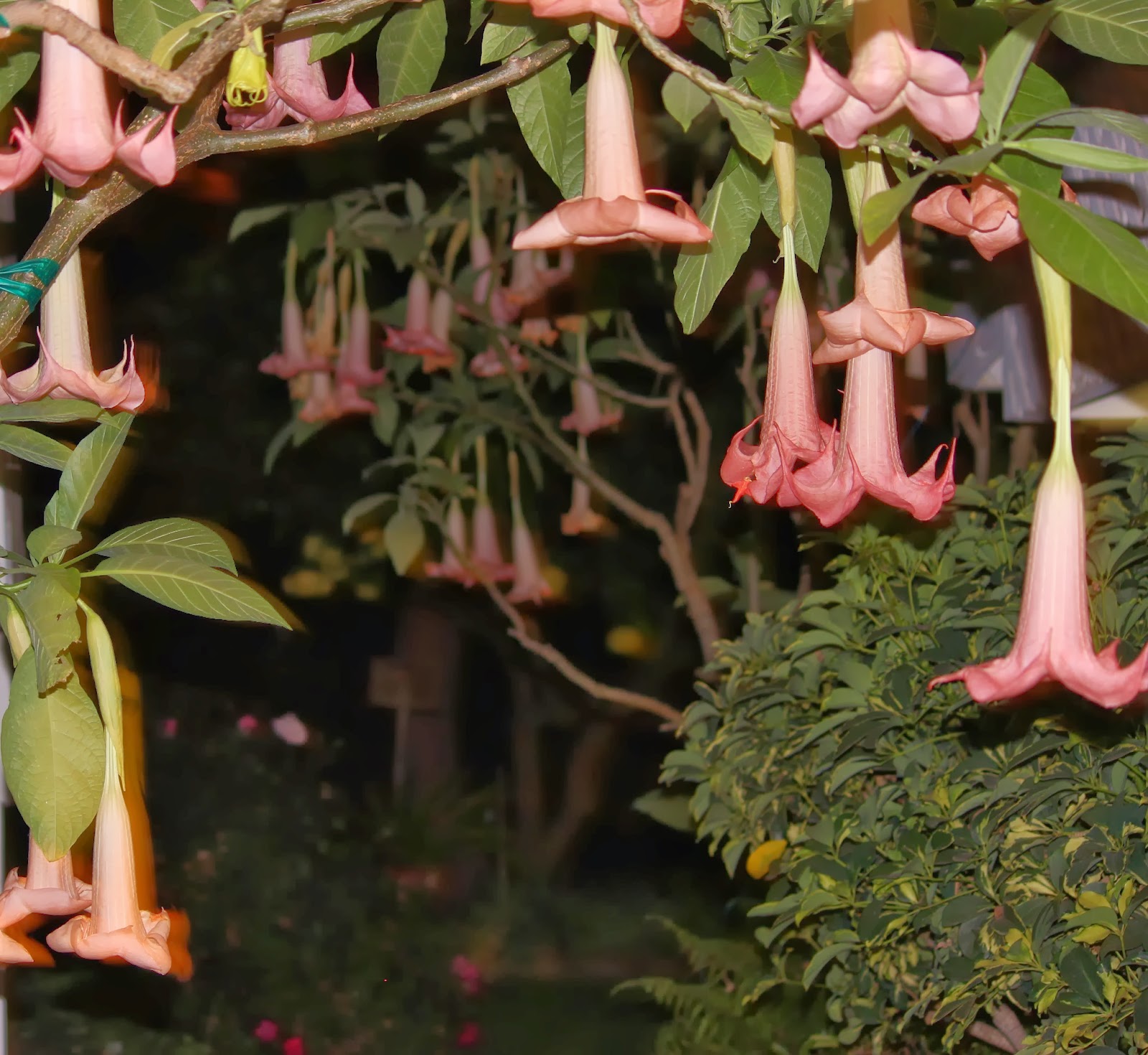 The path between my husband's shed and the patio is dominated by the angel trumpet (brugmansia versicolor) trees.  We planted one. The other just popped up. When the sun rules- the air is abundantly alive with the buzzing of bees.  At night, these coral beauties fill the air with their scent. Their perfume beckons moths from miles away, seducing the winged creatures into the ritual of pollination.


Speaking of night- this transom window is a grandly-scaled night light.  Named 'Ethel's Garden' in honor of my late mother, it was a collaboration between my husband and myself. I, as the artist who designed, hand selected and crafted the glass into  our personal vision of Eden.

My husband, was carpenter and woodworker. He built my shed with our sons; framed and mounted the window. He then engineered a standard solar lighting kit to light the  window from inside. In my nightly pass to close up the house for the evening- this act of extra thoughtfulness illuminates the short sojourn in the garden.

Color. Texture. Pattern. The melding of house to home.  We've belonged to this house and garden since 1986.  Our intent was to shape this place into our vision. The reality is it shaped us.

Linking to May Dream's   Garden Blogger's Bloom Day   and 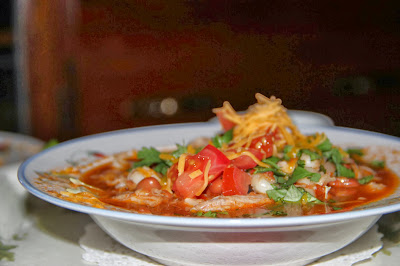 True Adventure - The Vastness of our Country


Make up your mind to find beauty wherever you go, in whatever circumstances you are.

Sydney, Montana. So far north- I could have handed Santa my list in person. The grocery store- the fresh produce section was the size of my study back home.


This was an impromptu trip of necessity. 5 airports in one day. Slept on a bench like some bum in the Salt Lake City airport. Watched Fox News in the Billings Airport - where I was weighed right along with my luggage.  8 prospective passengers were lined up single file by a lady waving neon orange traffic batons. The line was popped in and belted, one passenger at a time.


I told my husband that the men were in back for ballast. He said they usually put the heaviest person over the wings. I told him not to go there. That was where I sat.

Before the last passenger was allowed on-board, luggage was shifted with bags of sand. It was determined that even with the weight of one more person, we could still lift off.


The hood of the little Cessna was lifted. Starting it reminded me of old films of cranking a model t. Putt-putt. It seemed unlikely we would lift off. But we did.


Were drinks served? Even if we wanted to pass a canteen, all that would have resulted was to have a plane full of passengers who peed in their pants.

Someone had a sense of humor. On the runway where we  landed was a jet painted with the Australian iconic airline's name: Qantas. 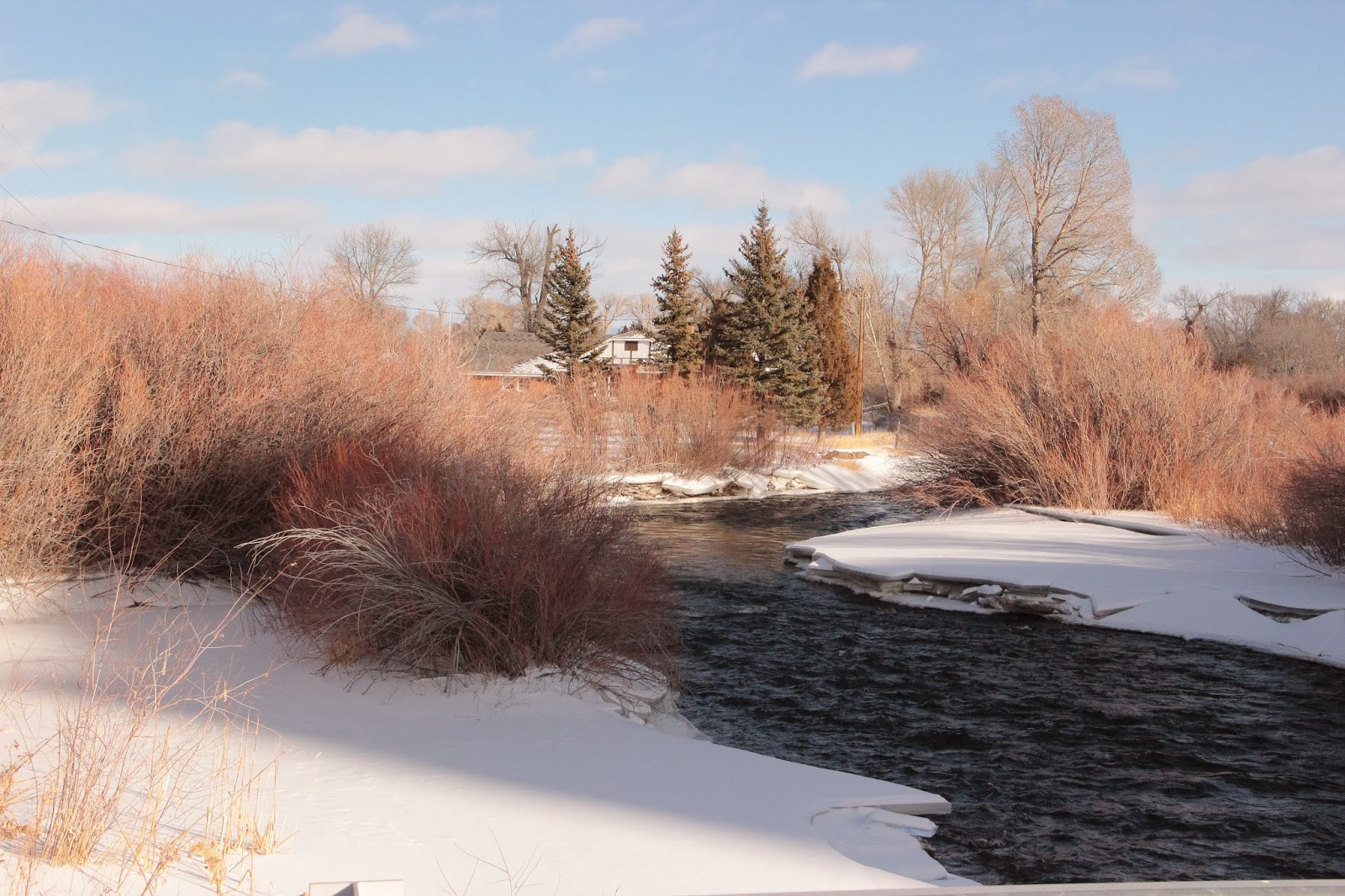 I wrote a dear friend of the flight:

"The beauty of this land where the prairie and sky aren't easily separated by eye is  breathtaking. Both shades of blues and whites are discernible only by subtle difference of texture. Occasionally a red fox stops to look at us landing intruders- show off  luxuriant fur."

It is a stunning landscape. Unfortunately, the climate can eat a man alive. One night the moon was obscured by a panel of icy air.  Time to drive home. To see up close what was dreamed of from too far a distance to make out any detail.

If I stayed one more night, I might have been tempted to forgo the plucking, lasers, waxing, depilatories- all the things a Hispanic woman  of a certain age do so we aren't mistaken for our husbands. I would have grown a beard to keep my face warm.

Dodging storms propelling blowing snow, we made it home safely to the land temperate enough for caterpillars to crawl where they will morph into butterflies.


Home. Where barren branches cradle bird nests. Where the thorns of the ballerina rose keep the cats from climbing in to steal the eggs.

Until we meet again- THANK YOU for all YOU do to make the world more beautiful.

PS- If you look my name up on Facebook- there are a couple more pictures from this trip.