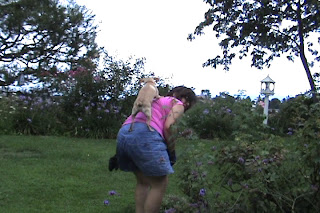 At the height of sunshine yesterday it was a perfect 72.5 °F. This morning when the puppies and I went for our morning stretch, it was a lovely 63°  under weeping skies.
Here, Tahoe demonstrates why she isn't always invited to help in the garden.
Longtime followers of this blog will remember when Tahoe went nose to nose with a coyote. The  young male predator pausing in his pursuit, with this confused look  as if he were asking, "Why is the bunny barking?" That moment of  inaction giving me time to scream and my husband time to grab my shovel and chase the intruder over the fence.
On our morning walk around the garden, Tahoe went on point between our his and hers sheds. She was  nose to nose with a monarch butterfly! It is impossible that anything on televsion  last week brought the hope or joy of that memorable moment -when domesticated and wildlife interacted. Some day I shall have to clip little cameras to the puppies'collars to share the world as seen through doggy-eyes.

The joy of the moment will long outlast the pain of the sharp cup hook ( heel spur) on the bottom of my foot.  The rest of the month is packed. Two stories to finish, one fact check to perform and three querries to send out. 6 appointments, an absentee ballot to study and a list to do in the garden before I play like a modern day Cleopatra- lounging on my side with my husband feeding me grapes. Because his normal work week often exceeds 60 hours- even though he is blessed to perform many of his business functions from his home office- my mother in law will be here to spoil me while this writer takes a week of non-negotiable R&R.

However, at the fringe of my life, there is sadness to report. One which makes me want to write the Governor Schwarzennegger or President Obama to ask they order the flag flown at half staff. When a business falls ill or fails, it is not a singular event. There is a whole ecosystem of other businesses and individuals affected.

DAMASCUS, Ore.--(BUSINESS WIRE)--International Garden Products, Inc. (“IGP” or “the Company”) today announced that the company and four of its affiliates, including Weeks Wholesale Rose Grower and Iseli Nursery, Inc., have filed voluntary petitions in U.S. Bankruptcy Court for the District of Delaware for protection under Chapter 11 of the U.S. Bankruptcy Code.


In the filing, IGP stated that, in the last several months, the companies’ finances have been negatively affected by a number of issues unrelated to their own operations, including being adversely impacted by the financial difficulties at Jackson & Perkins, which resulted in J&P failing to assure payment on its $1.7 million order for the 2010 season; three contingent liability issues, totaling approximately $27.2 million, and current market conditions.

The Company noted that it has worked diligently over an extended period of time to resolve the legacy contingent liability issues but that it has not been able to reach agreements with the parties. As a result, to protect the interests of its stakeholders – and to bring these issues to a conclusion in an orderly manner – the company decided to file for court-supervised protection under Chapter 11.

The rest of this newswire can be linked  here.

The image of the flag is from Flags Bay, an on-line source for informtion related to the flag of the United States.
Posted by Lydia at 11:32 PM

First of all, what an adorable photo of your beloved Tahoe on your back! Your comment about a puppy-cam made me think of The Art of Racing in the Rain by Garth Stein. It's a wonderful read, from a dog's point of view. And maybe your perfect companion while you're recovering from your foot surgery? If you have time, try to track it down before then. You'll love it!

What sad news about Weeks Roses. Hopefully the reorganization is just what the company needs in order to get on stronger footing. I guess that explains why AARS is on hiatus as well.

It's sad that Iseli Nursery is caught up in it, too. Iseli is such an institution in Oregon. The GWA field trip there several years ago was fabulous.

Hopefully there will be a happy ending for everyone.

Dear Joan- Thank you for the book recommendation. I am putting The Art of Racing in the Rain in my reading bucket.

I am praying the reorganization goes well so Weeks. Iseli, et al can go on. And for their subcontractors. Bankruptcy is like an earthquake causing tsunam. The damage is just beginning and clean up will be a very long process.