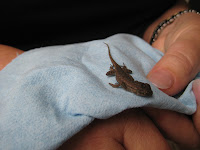 Considering what runs through the neighborhood, I'm glad it was only baby lizards running reconnaissance last week.

My husband thought they were cute. I believe there is enough commotion when the puppies slam up against the sliding door barking loud enough to hear in the next county when they spot a squirrel in the backyard.
Lord help us if they spot a lizard in the living room!

I prayed for the little guys' safety as each was released back out in the garden. I won't mind seeing them when they are bigger. If they are outside):-

When the weather is cool and drizzly- scents wafting from the kitchen are magnificently welcoming.  A friend is coming by later for a glass of wine. A simple social nicety I have long been remiss in  proffering. When the door opens and the scent of freshly baked focaccia greets her, I expect to see her signature smile grow larger even if she chooses not to eat.
Yesterday my foot held up through the Site D workshop. The object was for the public to have a chance to hand feed the government our opinion on plans as they currently are proposed. Fallow fields are owned by government entities.  The LA County Flood Control District. property bisects the City of Diamond Bar's 1 acre plot from the larger 28.7 acreage in the care taking of the Walnut Valley School District. These owners have been working through the process collaboratively and have now reached a critical point in the process.
As a veteran of many painful workshops where the participants are controlled by consultants paid by vested interests- this one was a delight. Hobble-along here did not get to participate in the site tour, but my small sub-group picked me to record our thoughts when we gathered back at Castle Rock Elementary School. My table mates were open, articulate and respectful. Others were more skeptical, but I believe this open process where the consultants gave up control of the input will be given the respect it deserves.

One of the very fair questions asked was why sell now while the real estate market is down?  A very fair answer is because the school district did not sell at its peak. The school district is in real distress: there are schools and students needing to be served; taxpayers to be respected.

Another question was what wisdom is there in the school district bearing the cost of the entitlement process?
The property's worth is tied to its entitlement. As long as the end decision is wise,  selling with some assurance of what can go forward is a good idea as it guarantees this middleman portion of the profits to serve the public good. 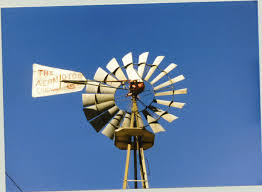 Last night I dreamed of the corner at Diamond Bar Blvd and Brea Canyon. "Back in the day," before we were a city, on the opposite side, there once was a fountain. Frequently filled with bubbles after a weekend- it was always a delight. Perhaps this is an opportunity to bring back parts of our heritage that have gone missing. The high water table could be used to make a symphony of the sounds coming from a fountain. Perhaps the peak could be shaped in the image of our ever-resent hawks. Power to pump the water came from a windmill like the one hidden the trees in the Ralph's center.  A solar system on an interpretive shed-roof provided backup power for the fountain-and lighting.  A sculpture of cattle represented the ranch this city was built on. In my mind's eye it was bronze- but maybe- if walnut trees must be sacrificed- it is better ethics  to send such trees to craftsmen for sculpting than send it to the trash heap or fireplaces.

Of course, dreams remain dreams unless there is funding. If the residences can be protected from the negative impacts that come from commercial and it can be shown why this location is better suited than existing- then the goodwill needed from the local community could bring a project to viability.

Excellent blog, my friend. Your hand crank of the English language is awe- inspiring. It is the projected ease with which you write that gives the reader a simple task. Thanks! And, aren't those humminbirds fun!!! xo

Hi Lydia,
For us, the marauding deer are what bring our black lab Oliver to the kitchen door, barking through to the next county. Crickets, not lizards, are what manage to make their way inside our house this time of year. Oliver follows them around the kitchen with the most quizzical expression on his face, but doesn't try to sniff or eat them. I wonder what he's thinking?!
Joan

Dear Sue- I can't get enough of those hummingbirds.

Dear Joan- So far no deer. If they ever find out how many roses there are here, that could change as other residents have had them leap in and out.

We used to get crickets in the house, too. Far better than the tarrantulas. Hairy spiders are the worst. Except for scorpions. YUCK.

That Video is precious, beyond words, Lydia.....I love Humming Birds and it would be the most thrilling thing in the world to have a Hummingbird eat right out of my hand....!

I have lots and lots of Lizards here in my Garden...I just LOVE them! They are so connected to the Ancientness of our world. I hope your Lizards do well in your Garden, my dear.