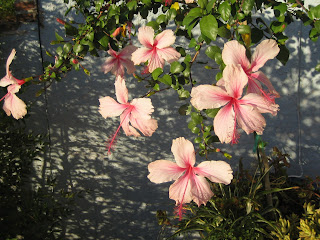 Need something Tropical for your garden and can’t find it here in the suburbs? Xotx Tropico is an amazing corner nursery not far from the old Farmer’s Market in Los Angeles. In terms of biodiversity per square inch- this is the most diverse and exciting an adventure as you are going to find without needing a malaria shot administered.

The hibiscus in the picture is in front of my home. It is a RARE weeping hibiscus. How rare is it? Xotx Tropico is the only place in California I have seen them for sale. To see a mature weeping hibiscus in full bloom is to understand that a weeping cherry tree can appear understated in the landscape. If you miss the opportunity to see the examples for sale at Xotx Tropico, then the next closest specimens of this floral cascading bouquet in shades of pink cotton candy may be in one of two places. Hawaii. Or Florida.

With the spelling of the Xotx- I was a little concerned that behind the jungle would be a strip joint. The owner- he looks like he could play a bouncer for someone really important. He spouts Latin better than a priest.

Now, as the daughter of George of the Jungle. I know something about tropical surroundings. True story. My father was named George. My mother, from the tropical island of Puerto Rico, was afraid to go home because of hurricanes. So she brought the jungle to where we grew up in Whittier.

When I was in high school, the whole jungle thing mortified me. If someone wanted to know where we lived, all one had to say was “go to the jungle” and everyone knew where our house was. No further instructions were needed

So, take it from me. This is one AWESOME place to seek out the unusual. Not just thirsty tropicals- but lots of bulbs from South Africa, where the weather is hot and the rain doesn’t fall any more than it does here.

Email ThisBlogThis!Share to TwitterShare to FacebookShare to Pinterest
Labels: beauty in the garden, Garden Hints, opportunity