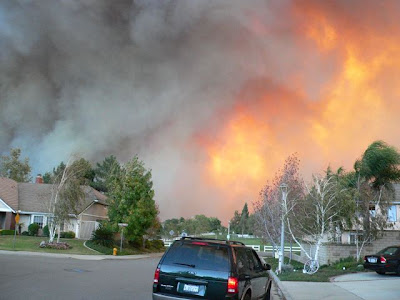 Remember the Triangle Complex Fire? It torched the borders of Diamond Bar on the scheduled date for The Diamond Bar Community Foundation Gala to the Stars. The premier event of the Diamond Bar Social season had to be rescheduled post-holiday.To this past January 4th. Which just happened to be my 54th birthday. 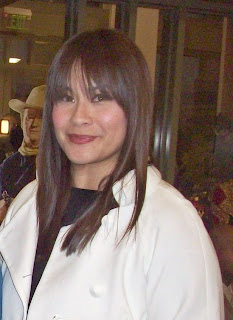 In keeping with the theme, a play on words suggesting a Red Carpet event, gussied- up guests were greeted by flashing cameras and autograph seekers.

Entertainment and decor were themed to Hollywood heyday. Now Pat Longo and his "big band orchestra" can say they have not only played for the weddings of celebrities such as Kelsey Grammer, Rod Stewart, Michael McDonald and JohnTravolta- they can add to the resume` that they played for Lydia Plunk’s birthday. LOL. 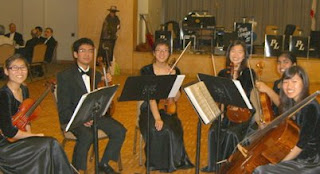 However, in my heart it is the Diamond Bar High School Chamber Orchestra- who spontaneously joined in playing happy birthday to me when friends gathered to toast my birthday that get top entertainment billing in my remembrances. It was nice that five of the talented young people got to stay for dinner.

My husband looked mighty handsome. Even before that glass of wine Kevin Claborn served me. 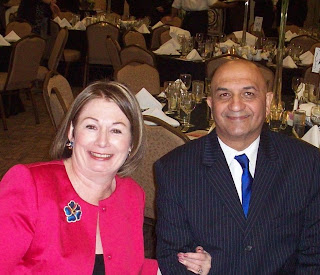 Our hosts for the evening were two of our favorite people, Matt and Debbie Rezvani. We met when our oldest sons were on the same team in Little League. We have been through graduations, marriages, births and deaths together. In the rowboat of life- there is none better to have in the boat with us than Matt and Debbie. Both are harworking, honest, forthright and generous people.

Because Matt works for an oil company- he is General Manager, West Coast External Affairs for BP America- I have a far better opinion of the industry than I might otherwise have had last summer when prices were so high. . His employer, owner of the ARCO brand, was honored with the 2008 Community Partner Award, for exemplary civic involvement. Which really was the reason for the event. 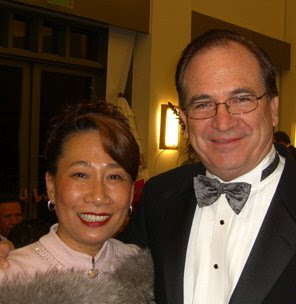 Matt thanked the DBCF for their service to the community’s needs and for recognizing the corporation’s generosity towards their goals.
I was totally surprised and pleased when , he acknowledged me specifically in a short list of people that provided him with the information his employer desired to have to meet what it believes is its corporate responsibility to a community in which it does business.
Above- The very accomplished Mei Mei Ho Huff with her husband, Senator Bob Huff
Right- The incomparable Martha House
with Mary Ann King aka- Miss Mary Ann of 'Romper' Room fame.
My hairdresser- Sylvia Claborn not only attended, their business, Claborn Hair Studio, filled and decorated a basket for the silent auction. My husband put in the winning bid, helping DBCF exceed its fundraising goal for the evening after expenses.

There was never a question that the original fillet Mignon and chicken dinners were appropriately served to the evacuees who sought shelter during the fires at Diamond Bar High School was the right thing to do. With the complications that come with delaying a large event, funding of planned projects from proceeds of the evening had been in doubt. But it worked out as the community pulled together after the fire
Diamond Bar has won many national accolades as one of the Best Places to Do Business and Best Place to Live. Now thanks to the common sense of the DBCF in distributing the original dinners and the ongoing generosity of the people of Diamond Bar, if there was such a list, we would be in contention for Best Place to serve in a Disaster.

Thank you to Trisha Bowler for the photographs. Sorry- I do not remember the pooch's name 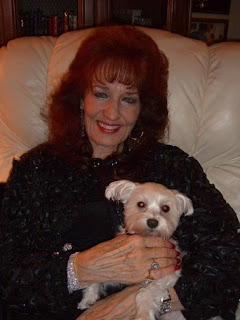 Just to name 2 of the accolades of my hometown

Our City of Diamond Bar is also on a very short list of government entities, particularly in California, to actually have a surplus! Way to go City Manager Jim DeStefano.
Posted by Lydia at 6:21 PM

Lydia,
Loved your blog and thank you for using my photos! FYI The pup's name is Daisy but I call her Pookie! I think she looks like a "Pookie"! teehee She is one of three little ones owned by Daryl's girlfriend. She brings them all to our house and it's always a frolicking good time! In that photo I had just gotten home from the Gala and sat down to hold Pookie!
Good job and a Happy Belated Birthday to you! (I am still bummed that I didn't get a photo of my handsome hubby in his tux!)
XO Trisha

Happy Belated Birthday to you, Lydia ! And many happy, healthy more :)