Our collaboration on the stained glass memorial to my mother, "Ethel's Garden" is entered in to a contest. The grand prize is a trip to Italy. Click over to the write up at  Woodcraft. 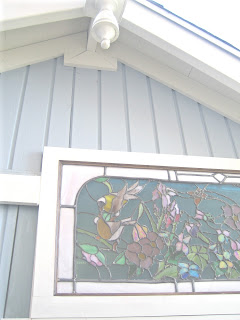 Most people are too sane to design an intricate window to fit in a garden folly. But when visitors see the hand selected, cut and wrapped glass at night, they understand. The leaded and copper foil garden- themed transom window's coupe de grace is the solar lighting. 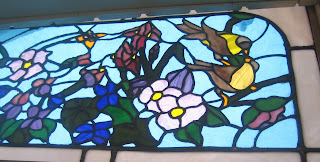 My collaborator, my husband Gerry is an engineer by training. Everyone knows engineers are good at math. Great engineers are creative.
My mother said after a visit when Gerry wove weeks away from home with weeks of unpaid overtime." I always thought they made so much money. But no one ever asked me to work like that." 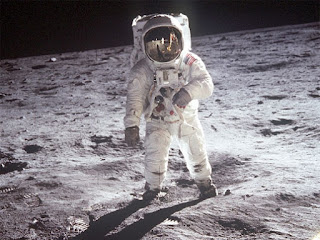 The Space Program. Engineers didn't stop with putting man on the moon.

The "pocket protector crowd", aka the original geek squad- these men and women are the creative force behind modern life. In shooting for the moon, the unintended consequence is  that engineers made it possible for us to take for granted a list of modern conveniences. Transistors, computers, GPS, microwave ovens, GPS, the Internet and solar lighting. The breathing apparatus engineers created to sustain life in a space ship is  the decade's difference between my oldest sister's premature child not living more than a few hours and our oldest son Trevor coming home from the hospital.

A significant engineer in developing  MILES (Multiple Integrated Laser Engagement System), first with Loral and then with Lockheed Martin, my husband couldn't know he was developing technologies to make life not just more practical, but more beautiful.

Over a belated birthday dinner, my husband gave me a rundown on some of the concerns he military needed addressed in MILES to properly train our military troops. This program was one of the first users of Lithium batteries.

More powerful than NiCad units, they are not with out quirks. Before Lithium batteries became household staples, they were powering equipment in the backpacks of soldiers. Only because I don't want some kid to try it, I am not going to tell you about Lithium batteries atrophying. They sit around and then can't get moving. Until some judicious "shock therapy" on the edge of the table can loosen the chemical-induced fog... from just such an "aha moment" arose more scientific (and safer) protocols. 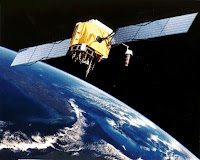 MILES was also a pioneer user of Global Positioning Systems ( GPS). For GPS to operate accurately, 3 satellites must be in view. Back then, there were only 4 satellites up. The simultaneous line of site geometry between 3 moving satellites meant live training exercises were limited to just a few hours- often in the dead of night.

Today 24 GPS signal satellites circle our little planet Earth. Which has led to a world where in many locations communications are 24/7/365.


Solar power used to keep satellites circling led to the my shed being lit at night with no assistance from Edison.

While the US Government gets its financial house in order, we must remember to dream. The greatness of this United States is built on the foundation of exceptional thinkers who make dreams come true.
Posted by Lydia at 12:01 AM