I dream of Switzerland. Back before I knew my husband, I had saved to attend the Fashion Institute there. My mother, who never asked for anything, who never planned on staying gone from Puerto Rico when she enlisted in the Navy knew. If I boarded the plane for school in Europe, I would probably never come back.

She asked me to stay. And so I stayed. If  I had any regrets, they are long forgotten.


If I were to drive a car from Diamond Bar to Zurich, ignoring the impact of things such as oceans, seas, rivers and mountain ranges would have on the journey, at an average speed of 60mph (96 kmh) straight-through- it would take a bit over 95.5 hours to arrive.  Exhausted, covered in seaweed and wearing a cowbell.


Fortunately, my husband flew. Through New York on 9/11 on American Airlines.  Fortunately, that incident was much more interesting for those of us on the ground than it was for passengers on the plane.


I looking forward to tagging along on some future trip. I want to know if Switzerland looks, sounds and smells as I imagine from Gerry's photographs. Clean, outdoorsy and green.


Green and gold are the colors Switzerland is known for. Usually locked in vaults. However, after nearly 36 years of marriage, my husband knows to what I am drawn. 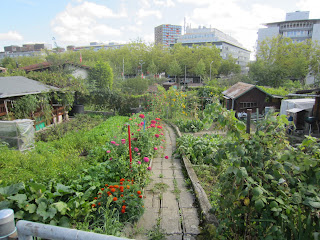 Green and gold growing in gardens. These last few images of the community type. With a short growing season, the camaraderie is equal to the food grown.

My darling even knew to bring me back a photo of that greatest commodity in any country- compost.
Back home in Diamond Bar, daily life went on double time with my life's partner gone. If the Santa Ana Winds pick up, we are entering the time of year with the greatest fire danger. Spiders suitable for roles in Tarzan movies  are auditioning in odd corners. With him gone, it would be the one time I could clear his office- at- home space and get it painted without inconveniencing him.
I have a rule, that whenever Gerry travels, whenever he comes home, there is no doubt that his presence is needed. I can make do on crackers with cheese all week, but when he comes home, it is to order and abundant food.
The night before he arrived back in California, a chicken was roasted, pasta prepared and two roasts braised. One chuck roast was seasoned Mexican style and one with leaks, wine and mushroom gravy.
A bit over the top? Not when you consider how easy kitchen prep has been the last week.
A special side dish came by way of Nikkipolani. I played with her dressing of hazelnut oil and balsamic vinegar. A pressed clove of garlic, a pinch of salt and just a dash of white pepper shaken well. WOW is how she described it and WOW it is.
Gerald loved the surprise of the simple green salad garnished with dried cranberries, the walnut bits toasted in hazelnut oil sweetened in the cast iron skillet, glazed with melting sugars- white and brown and  spiced with just a bit of freshly ground cinnamon.
Romance can be as grand as the old cities of Europe or as simple as the sensational taste of fresh salad.
﻿
Posted by Lydia at 8:42 PM

Email ThisBlogThis!Share to TwitterShare to FacebookShare to Pinterest
Labels: beauty in the garden, cooking, Family, Food and Wine, Remembrances, Travel