“I almost wish we were butterflies and liv'd but three summer days - three such days with you I could fill with more delight than fifty common years could ever contain.”
― John Keats, Bright Star: Love Letters and Poems of John Keats to Fanny Brawne 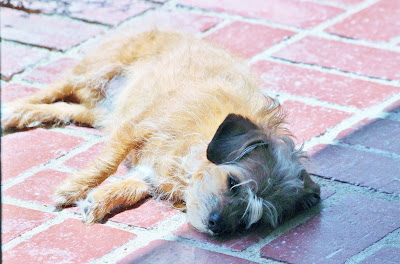 The Romans referred to the hottest days of the year in latin as diēs caniculārē- dog days. Our Reno demonstrates, that while she may look like a used Swiffer® duster, the the expression "work like a dog" is lost on me. 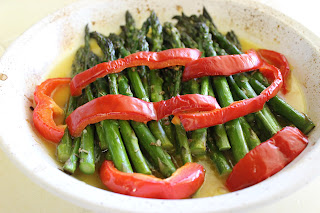 Asparagus is love on a plate. The season begins in spring, and thanks to modern transportation it is now lingers as a summer love we need never get over.

Once I learned to roast asparagus, I never boiled them again. Simply roll fresh trimmed spears in just enough extra virgin olive oil to give them a sheen,  let the juice of a fresh orange lightly shower their summery freshness perfumed with just a bit of finely grated rind. For just the two of us, a pie pan was just the right size to let the spears cook without drying out to twigs. Bedeck with bright ribbons of  red bell pepper and sprinkle coarse sea salt before offering to the toasty 425° F oven. Set the timer for 15 minutes- then check with a fork for the beginning of a wilt. 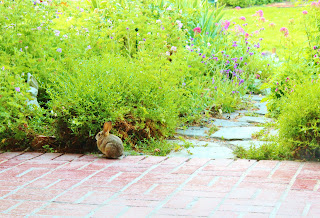 The abundance of bunnies is such  now that they not only greet us in the mornings on the patio- one nibbled right next to Gerry's slippers - while he was in them- during his morning coffee break. 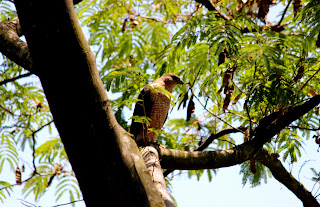 The Coopers Hawk settles in the tree, trying to decide on its lunchtime menu. Should it be rabbit- a rodent- or a bird from the feeder. As the latter is my least favorite of what I wish to serve it- for a few days I will let the birdies not make the pickings so easy. Which resulted in a large hawk landing feet from the patio table. Caused quite the commotion, so majestic a bird, so unafraid of humans.


The bluebird feeder played host to a family of goldfinch. Like children, it is bittersweet when they leave. I so adore working in the garden to the sound of freshly hatched babies ordering their parents about. But with hawks and screech owls now foraging from the sky, and Lord knows what from the ground- the new silence now that they have moved headquarters to less open a setting is truly a relief. 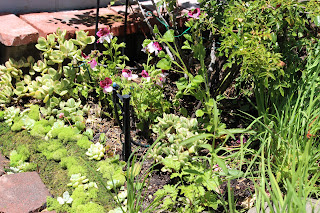 Some leftover moss is put to use as temporary mulch. Hopefully it isn't tasty- and the critters shall leave the succulent cuttings long enough for them to set roots along a dreadfully hot alley.

Butterflies. What would summer be without butterflies?  It seems the right thing to do, to learn the proper names of that which we love, doesn't it? 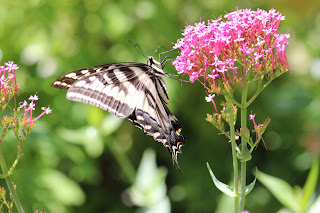 Thanks to butterfly man  Jim Brock' s little waterproof identifier in stock at Vroman's Bookstore,   I am pleased to be learning the names of these seasonal  guests floating  about.

It is such a pleasure, this first summer with my new camera. On days I am not called out on assignment, it sits on the patio, away from the dirt of daily chores. The lens du jour at the ready, waiting for a fleeting moment of ephemeral beauty. When a butterfly leaves floating through the air to dock but momentarily for the refreshment offered by a summer flower, everything must be convenient. Else there could be a lonely gap where an image to remember this summer love by belongs.

My apologies for the change in background behind some text. I have no idea why this annoying quirk is happening- but promise to research with the intent to do away with the glitch.

Email ThisBlogThis!Share to TwitterShare to FacebookShare to Pinterest
Labels: beauty in the garden, Food and Wine, Garden Hints, lessons from the garden, nature