"A garden should make you feel you've entered privileged space- a place not just set apart byt reverberant- and it seems to me that, to ahieve this, the gardener must put some kind of twist on the existing landscape, turn its prose into something nearer poetry."

~ Michael Pollan, Second Nature: A Gardener's Education
Travel mixed with good earth and the blessed weather of Southern California make for wonderful gardens. Terraced hillsides holding cutaways for citrus trees borders on Nirvana. Don't you just love how the the fruit bearing limbs are shown off amongst other greenery? 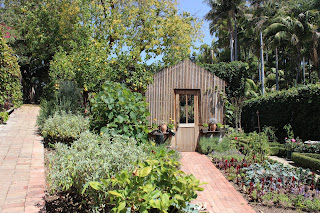 Our modern selves take for granted shopping for fresh fruits and vegetables. In the early decades of Beverly Hills, not even wealthy socialites could send their staff out for much in the way of fresh produce. It was grow your own or do without. 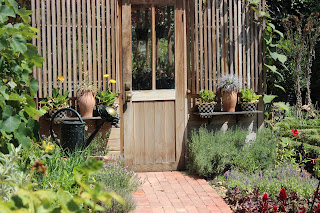 Before the summer sizzled, the lath house orchid's is frequently shaded under a blanket of purple morning glories.  The MacKenzie-Childs watering can and artwork punch up the visual interest of the good eats of the vegetable garden near the kitchen door.
Virginia Robinson, with her taste for couture, while serving on the board of the family flagship stores (J.W. Robinson's) heavily influenced the decision to build its first major branch store outside Los Angeles. Built on the site of a successful Hollywood Atelier, the building designed by Charles Luckman and William Pereira was set off by the landscape  design by Florence Yoch and Lucile Council. The luxurious interiors by Raymond  Loewy specified Vermont marble and Brazilian agate. In 1952 the store opened to accolades- anchoring Beverly Hills reputation as a destination for status shopping.
With mountains of money at her disposal, Virginia Robinson was not content to just spend it on personal pleasure. Not content to spend her time at board meetings of the department store founded by her late husband's family.  She put her resources to work as a benefactor of charities as diverse as The Hollywood Bowl through Kennel Clubs.

However, her greatest legacy is the home and gardens she bequeathed the public. She died just a few months short of her 100th birthday, leaving behind a property that was old and in need of repair. Gratitude to the Friends of Robinson Gardens and the LA County Board of Supervisors for working lovingly with the property- and respectfully with the neighborhood.

Virginia was not corseted up by her original vision of a totally Mediterranean ambiance. As the land was worked and the microclimates forced some plantings into fields of mulch, she worked with the reality that because dreams don't always come true, there is no reason you can't have another, just as lovely dream


Our docent led tour mentioned that the reality of growing water constraints feeds changes to the garden.

The 90 minute tour left time to notice vignettes and the broader context of the garden. 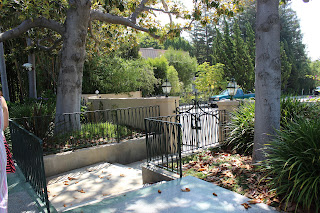 This gateway to the mansion was originally straight from the cul de sac. But Virginia decided life was not that way. So she had pedestrians turn on entereing; a physical metaphor for life's journey.

I apologize that the richness of photos and lessons just over-flow what I intended to be my last post on the garden. To live the poetry created on a once barren dirt hill requires a bit more time to digest than planned.
Please come back one more time for this series closer. I promise- we'll rest our feet while we stop to smell the roses at The Ivy Restaurant on Robertson...
Posted by Lydia at 10:23 AM

Email ThisBlogThis!Share to TwitterShare to FacebookShare to Pinterest
Labels: Garden Hints, lessons from the garden, Thank you