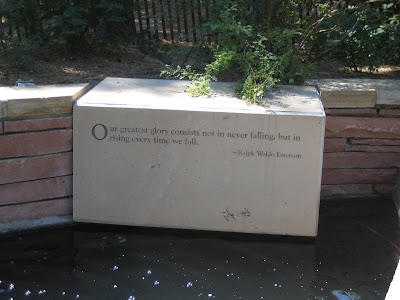 If you can't read the inscription, click on the photo. Taken at the Cheyenne, Wyoming Botanic Gardens, ol' Ralph Waldo's bequeathed us with good advice on what it takes for any venture, including marriage, to be successful.

Our courtship was short. No way was I getting a hunky brainiac outdoorsman who wrote poetry and laughed at my jokes get away. I lassoed him up before he had a chance to object. Or have a chance to find out my myriad of phobias and insecurities.
The date was cemented when it turned out our first choice was the opening of pheasant season. For many years, our anniversary consisted of hunting trips with my in-laws, later our children and dogs in tow, up to Bakersfield with shotguns and dog crates.

We proceeded into years for which, the longer I look back, the more honored I am to be his wife.

Who is this man I married? On top of being a devoted husband and wonderful father, he is the hardest working, most honest man I have ever known.  Gerry has this unwavering sense of responsibility. The customer, the company, his colleagues- everyone else comes first. It doesn't matter who makes the call or if it comes in at 6 pm on a Friday night.  Engineering is not merely his job. It is his calling.

From the age of 9, Gerry knew he wanted to be an engineer. If  you ever wondered  what an engineer at their core is- the good ones are that special breed of person whose  curiosity is endless. Despite his brilliance- or perhaps because of it- he can’t read a clock when it is time to eat dinner. Or go to bed. Not when his imagination is queuing up what is needed to turn an idea into something real.

His parents were of modest means. His father kept bees, joined the Air Force and became a welder mechanic after his service to this country was complete. His mother was born on an Indian Reservation during a rainstorm in Arizona. Her life was dedicated to her Christian faith, her husband and their family.

The oldest of 3 children, Gerry worked his way through college.  Along the way to his dream he picked beans, worked shifts at a smelting company. As long as it was honest work, it was never too hard or dirty.

When faced with a decision, Gerry never takes the easy way out. He seeks to do what is right. He never cheats. He gives full credit to others. Whatever the personal toll, he is a man on a mission to see every battle through to success.

The greatest gift Gerry ever gave me is courage. His unwavering fidelity is the stuff of Hollywood movies. If I have succeeded more than failed in any area of my life- he deserves the credit. I could never have lived so rich a life without him leading the way.


37 years. Each jets away faster than the last. My best advice on what it takes for an enduring marriage -

Marry someone you not just love, but admire. Even if children aren't a part of your future- many women's questions of character are melted into this question- is he the kind of man you would want to be the father to your children? Be there for each other when the tough times come.  Life isn't always fair. However, when you can keep God at the center, you will  feel blessings you never imagined.  Promise.

A Very Happy Anniversary to you both, my dear...! This is such a BEAUTIFUL loving post! I think it is so fantastic that you feel as you do about your wonderful husband and the marriage you have...! BRAVO & BRAVA, My Dears....!
That is such a cute picture with your four little sweetrhearts....!

Thank you. Sending love your way, too.

Lydia,
I love love loved this! It shows so much love and devotion to the man you married! Yes Ger is a good man and as we know is willing to help his friends if he can.

I must say, I don't believe I would have ever recognized you as the bride in those pictures! Never! They just don't look like the Lydia I know now. Gerry, yes without the mustach and glasses it's the Ger I know.
Your mom was such a pretty and sweet looking lady. I will always regret never having met Ethel!

You need to make a plaque or some kind of momento containing this blog for your children and grand children so they will always know what kind of father/grandfather they have.

Wonderful tribute to your husband! You complement each other perfectly. I love seeing photos from your wedding day. Happy anniversary, Lydia. May God bless you both with many many more. (And babies to hold in the next anniversary photo?)

I just LOVE your wedding pictures. You two were just too darned cute!!! Congratulations on your
37th year. My best for many more! xo

Trisha, When you are in my garden, you know my mother. Nikki - What a wonderful thought and Sue- Thank you,

I stumbled on this post and loved reading the heartwarming story of your marriage. You guys have aged very well and are truly blessed to have each other. I wrote a lengthy post on marrying an engineer (my wife and I are both engineers) and thought you may relate to it. You can read it here - http://www.jodilogik.com/wordpress/index.php/marrying-an-engineer/