Time flies. In my garden. With my books. With you, dear friends, it is all first class. 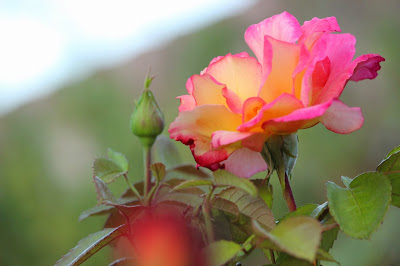 This Brigadoon Rose is rarely out of bloom. A very sturdy bush- I expect it could be clipped by the truck  which is parked next to it - and the plant would be the winner. It was a memorial gift from my friend, a force of nature herself, Glenda Thompson- Bona. 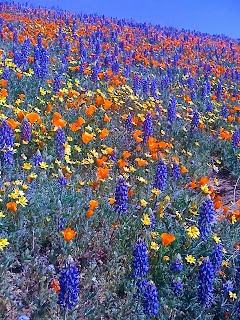 Now a Nevadan, Glenda  provided this inspiring wildflower  image from her days as a docent with the Tejon Conservancy to pair with my Examiner.com article, with promises of a field trip this coming spring . 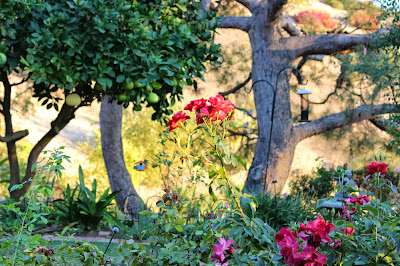 This view through the pine is from just outside my study. Last week, our  Mr. Garcia trimmed out some lower scraggly branches- the horticultural equivalent of a bang trim. 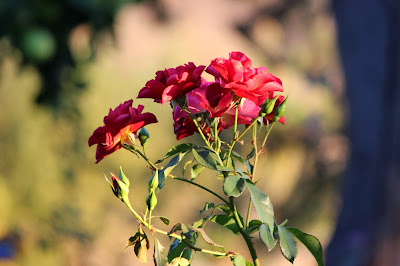 The 'Cinco de May' Rose dominates the foreground. 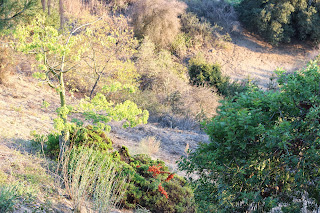 The background is largely fallow.  A lightly sketched upon canvas prepared for the next report of rain on its way. Then buckets of wildflower seeds are on hand to paint with. Once they take hold- there will be no stopping the color wheel turning the hillsides of Diamond Bar bright as in the Poppy Preserve. 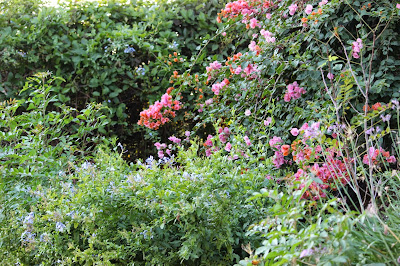 Where the land is planted, it not only looks cooler- on summer days, where it is green is much more comfortable to hang out in than where it is brown.

The bracts of bougainvillea wave from a thicket near a hidden corner of  back hillside. The blue flowers of the old fashioned plumbago- beginning gardeners beware: this plant acts as though it is shooting  itself up with steroids. Its penchant to muscle in where it wasn't planted presents quite a dilemma. While it is invasive- the soft blue flowers are beacons to butterflies. 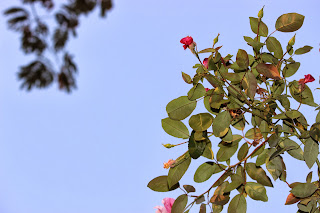 The butterfly rose-  the delicate flowers are so light and ethereal- they appear ready to float away like delicately scented butterflies. The first time it enchanted me was at the former nursery owned by the late Mary Lou Heard. Still hard to believe she is gone. But what a legacy she left in gardens across metro Los Angeles and Orange Counties. 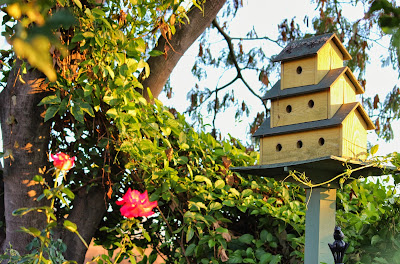 The trumpet vine. I thought it died.  Perhaps it is Hindu. For it reincarnated itself from the bare spot a good five years after it disappeared in the dirt. It was gone more than enough seasons to change the understory from shade-lovers  to sunbathers. So much for that plan. Now  one arm wraps through a re-purposed iron wine rack now serving nectar to hummingbirds when the vine is in flower. 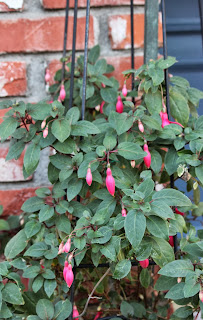 The summer of 2012 was brutally hot.  It killed the air-conditioning with over-use.  While on travel-the sprinkler to the dainty fuchsia failed.  What remained to greet me upon my return was a littering of parched leaves - and little else.  By the grace of God and a full year of intensive care, what looked like a hopeless case is now pushing her way up, blooming  through the protective outer skeleton of an iron obelisk. 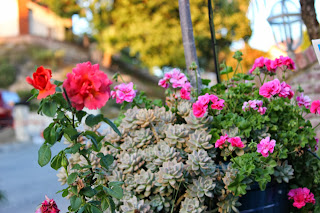 'Easy Does It' Rose-  Another long bloomer, she provides ample opportunity to study her character. While not declared in her lineage, I believe she is part cactus. She likes sun-bathing in a spot where other roses wilted; begged to be planted elsewhere. There is also a certain charm to the crimped edges of her petals.  Someday I will tell my granddaughter that  the garden fairies designed the unfurling edges with pinking sheers. 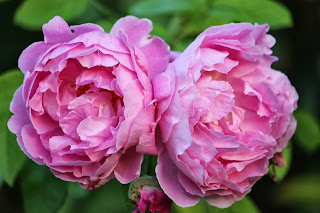 'Mary Rose' brings to mind the paintings of Rembrandt. If he were alive now- I imagine this would be a floral muse . 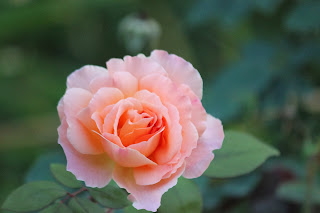 'Tamora'  rose is one of those cheerful friends who gets along with everyone.  I wouldn't die for her- but I did once break my arm pruning her. 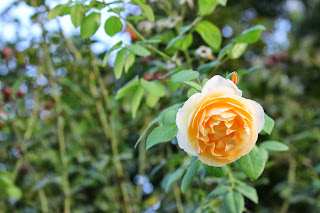 What would be a collection of David Austin roses be without 'Graham Thomas'. This image was taken looking straight up into the shade.

Linking to May Dream's GGGD and My Romantic Home.
Posted by Lydia at 10:50 PM

Email ThisBlogThis!Share to TwitterShare to FacebookShare to Pinterest
Labels: Attitude. Friendship, beauty in the garden, butterflies, lessons from the garden, Philosophy

Oh Lydia, Tranquility; that's what I received tonight when viewing your latest blog. Oh, I may be confused about what to do you my own place, but I have no doubt that what you, and God are creating at your place is simply said as spectacular!

Yes, unfortuanately, I'm not the writer you are and therefore cannot fully express my awe and wonder at how your front and backyards are springing forth in the fall!

I feel like it's spring, and know you know the main reason, but your blog today is helping me keep the amazing zest for life going on strong with little to no effort on my part.

Thank you, Judy! Your encouragement means more than you can imagine.

Thank you for visiting me and for the opportunity you've given me to know your blog. I just love the way you write...it's like reading a painted picture..your photos are so beautiful too:)

All so very beautiful, my dear Lydia....That first Rose, though--grabbed my heart. Brigadoon, indeed....! Everyone of these pictures lift my spirits....

I have some close looks at some roses and other flowers on my blog, right now....It is a good time for this kind of Beauty!

Lydia your roses are stunning in your beautiful landscape!

Thank you for visiting and commenting on my blog and thanks for the stroll around your beautiful garden.

Wow, that picture of the California poppies with the lupines took my breath away!

As always, your garden is a beautiful tranquil place. I don't have the abundance of flowers that you do, but I do have the trees turning colors. Less maintenance! LOL. xo

Your roses are so lovely, especially for this time of year!

My Graham Thomas flourishes in the filtered light of a very old sycamore tree. But it blooms much earlier than now, and is currently covered in plump rose hips.

Hasn't this autumn been wonderful in the garden? You have such loveliness to contemplate -- like a painting you've assembled that's ever changing. That bougainvillea is a beauty to behold. I love those splashy colors. And that Cinco de Mayo? I'm glad I've got one, too. Not thriving in its somewhat shady spot, but doing quite well for a tiny own-root plant.

Hurray for plant resurrections! If only all good things were as resilient.

Thanks for all your visits on the blog. I've missed your company ;-)