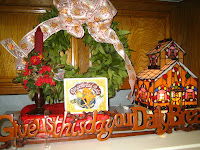 When a fresh bay laurel wreath is hung over the refrigerator and the timer for stained glass gingerbread house is plugged in, that is my signal to our household that the Christmas season is underway. Over the next week our house will be transformed from autumn and Thanksgiving to the celebratory nature of Christmas.
We have a bay leaf tree. It sits just outside our kitchen. Potted up, it does not grow overly large. Every few years the tree is yanked out, the roots pruned and some fresh soil packed around the roots.
Bay laurel trees can be a little pricey for their size: but compared to the cost of the stale leathery leaves in the grocery store: that little tree more than pays its way with fresh leaves for potpourri, wreaths and kitchen seasoning.
Where did the legend of the Laurel Wreath begin? In ancient Greece. Recall the ancient myth which tells of when an arrogant Apollo, son of Zeus, held out to ridicule the God of love, Eros. Apollo doubted the power of Eros’ arrows. Annoyed, Eros gave Apollo a demonstration. He shot Apollo with a golden arrow. His flesh pierced, Apollo fell immediately, helplessly, endlessly in love with Daphne. Not finished, Eros then turned and shot Daphne with the antidote on an iron arrow so Apollo’s feelings could never be returned. And so the smitten Apollo came to be doomed to pursue the ever- fleeing Daphne.
When Apollo was about to overtake Daphne, she pleaded to the earth goddess, Gaia, to save her from his lust. Gaia complied by turning the lovely Daphne in to a laurel tree just as Apollo was about to overtake her. Despondent in his unrequited love, Apollo took some branches from the tree wove a wreath to wear on his brow made from the leaves of his beloved.
Since ancient Greece, the laurel wreath resting on the brow is synonymous with triumphant victory. Perhaps that is why I like it as a signal to the Christmas season. For as a Christian, this is the season where the story begins which ends at Easter. In my faith, it is believed that Jesus ultimately offers the gift of victory over death to all who call him the Son of God.
Posted by Lydia at 9:31 PM