To Mama on Her 87th Birthday 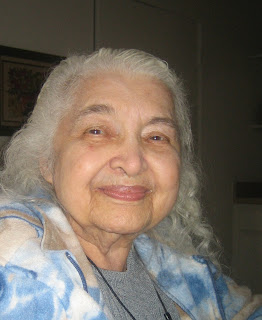 When I was in high school, she was told to get her affairs in order. I tease her because she never had even one " affair" to put in order.

My mother is my hero because she lived my one rule. Do what is right.


Her own mother died in childbirth. Her earliest memory is of her aunties getting her all dressed up- taking her to the orphanage- and even the home for unwanted children didn't want her.

The aunt with 10 children- my mother thought, how much more trouble would be 2 more? Evidently enough, that my mother and her barely older brother were left in the care of the spinster Aunt.

Mama was offered a post-graduate scholarship. But in those days, it wasn't proper for the little sister to accept such an advantage unless the older child was also so accommodated.

My mother wanted to be a physical therapist. So the petite Latina flew from Puerto Rico to the land of English as the only language. She enlisted as a Navy Wave. Working as a vocational therapist, she met the tall, dark haired and handsome George Lent after his arm was broken by an ethnic gang which jumped him. 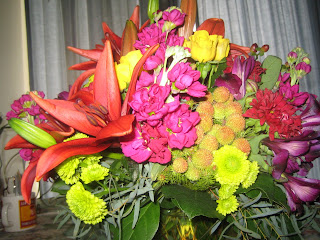 They married. Nine months and two weeks later- their first child was born.

This week my mother turned 87. She received her favorite gifts: a grandchild sang to her, some company and flowers.

Happy Birthday, Mama. We never expected you to be around so long. We are blessed beyond words that you did.
Posted by Lydia at 6:31 PM

Email ThisBlogThis!Share to TwitterShare to FacebookShare to Pinterest
Labels: Holidays

Lydia, what an absolutely beautiful tribute to your mother. I see where your good looks came from! I lost my mother 10 years ago in Oct at age 87. Treasure each day as you never know! Judy

I, too, loved your tribute to your mother! I wish she could read it.
It is a blessing that she is kept close by so you can visit her often.

I am wondering....my Aunt Zora (mother's half sister) married a handsome Naval guy named Bob (Robert) Lent! This was when I was first pg with Eric so it would be over 36 years ago. Wonder if you all are related.

Bless your mother! She is fortunate to have such a loving and caring daughter.

Lydia, Thanks for posting your mom's picture. She still has that beautiful smile I remember from 37 years ago when she was in charge of our candystriping shift. Wow! Was it really that long ago?
May God continue to bless that sweet lady and her wonderful family!
With Love, Karen