“Each problem has hidden in it an opportunity so powerful that it literally dwarfs the problem. The greatest success stories were created by people who recognized a problem and turned it into an opportunity.”
Joseph Sugarman 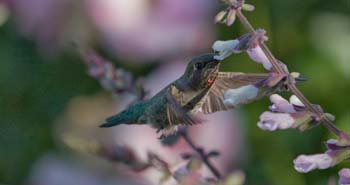 The average hummingbird lives only 5 years- if he is one of less than half that make it through the first year.
Some of the world's smallest birds will fly non-stop 500 miles across the Gulf of Mexico for 20 hours during migration.  Hummingbirds have no sense of smell- but still need to find 1,000 flowers for nectar and numerous bugs (for protein) to feed on- needing to consume up to 8 times its weight every day in order to power its hover 'round.
Whatever your problems are; compared with what a hummingbird has to do to just to stay aloft, aren't they really concerns awaiting a plan needing follow through?

When I was young, I was very restless. I panicked too easily at the thought of being left behind. It was easier to be afraid than patient.

Fortunately God sent his lesson to me on the wings of what Spanish discovered in the summer gardens of America -Joyas voladoras - flying jewels- hummingbirds.  Just because the journey to a flower isn't straight on, that doesn't deter their arriving at their goal. They may wait in the limbs of the lemon tree for a clear opportunity. They may fly in with the skill of the Navy Blue Angels; turning and rolling over midway before breaking the formation apart and zooming off..

What hummingbirds teach is to spend some time outside. Act boldy and with purpose.Skill is more important than size. When at first you don't succeed- try a different approach. Do your job with joy. It will multiply with everyone who watches.

Now, go plant a flower.   Give a hummingbird an opportunity.

Image by Gene Sasse. This week's edition of his newsletter is a seamless example of going with the flow. This week his writer (me) was unavailable. He went ahead with a collection of   Garden Quotes with Images. PERFECT for summer. Open the link and believe.
Posted by Lydia at 8:56 PM

Email ThisBlogThis!Share to TwitterShare to FacebookShare to Pinterest
Labels: beauty in the garden, Philosophy

You are right! I loved this topic! As I have told you all we have a feeder up that has to be filled every single day as those little guys drain it dry! As I told you too, we call it "Little LAX". Most of the time there will be eight of them, six sitting and drinking and several more hovering. Some will swoop down and fuss and boot one or two off so they can have a turn. They are so entertaining to watch!
I asked John the other day "Why do we do this"? First of all, the other day he ran out of the commercial mix and had to call Sue to get the recipe for the home made type. Well, I later realized that in several days he had used nearly all my sugar! grrrr
Well, I answered my own question. They are so much fun and entertaining to watch and they are even tame. You saw how John sat in a chair holding up the feeder in his hand and they swarmed around him. So sweet!
Also Kevin tells me that they are the only birds that can fly backwards! Yup, little helos! :):)

I love the hummingbirds too. They are amazing. I found a dead one once. He weighed as much as a cotton ball, but that beak of his was hard as a needle! Good thing they are friendly, I'd hate to be pierced by one of them!
Check this site for a wealth of information on the 'smallest bird in the world'...
http://www.worldofhummingbirds.com/facts.php
Thanks L. Thanks to Gene for the photo! xo

I LOVE Hummingbirds! There is something so dear and vulnerable about them---And they're ability to find the flowers they need is uncanny--Especially considering they have no sense of smell...(How do the experts know this??)

When one of my large Agave's flowered a few years ago...the amount of Hummingbirds feeding and hovering was fantastic! I must have taken 3000 pictures of these wonderous creatures....! It was incredibly exciting!

Oh Lydia, this is one of your best. I'm mesmerized by hummingbirds. Once long ago, when I was nearly 8 month pregnant, we stopped in Calico ghost town on the way to Las Vegas. As we walked near a bush, a hummingbird flew into my arm. For something so tiny, it had a very strong force and bordered on a very slight momentary painful experience. The collision must have corralled the little critter as it landed for quite some time on the bush right by me. I was lucky to get a picture of it as it was about 4 inches away from the camera. The stunned little creature must have stayed at least 1 minute before flying away. I really got to inspect it up close and thought it was such a miraculous little piece of life.

I had a thought several days ago, "when my porch is finally finished from the construction project underway, my last job will be to buy/hang a hummingbird feeder." Today's post is making it harder for me to wait for that day.

My Mom loved hummingbirds and collected images of them, some small stained glass pieces, cards and letter writing paper, windchimes, etc. When she lived here we had feeders around the perimeter of the house where Mom would sit in the afternoons watching them. A nice post today.

Good Sunday morning to you, dear Lydia.
The hummingbird and what he has to go through is a perfect analogy for our lives.

Twice in a row this week, when I opened the downstairs curtains, one was right outside the window near the fountain!