Why We Need Civic Beauty

We're going to get all these sidewalks cleaned up so people can walk down them, because they're going to be coming back.”

~Robert Rogers
Times of turmoil are when we most need beauty.  A walk around San Marino last week was just what the doctor should have ordered if I called her):-

The big news around town is the grandchildren of Congressman Gary and Cathy Miller were found in Mexico and returned to California. For those who think this ends the sad saga- found in the encyclopedia under "bitter custody disputes"- unfortunately the salacious accusations against the children's father, Brian Miller did not skip a beat.


Not much irritates the journalist in me more than mis-stated facts- and there are so many mistaken "facts" picked up from one paper and spread to another that I cry for my profession.  We want to do well, but sometimes schedules and budgets being what they are, we fall short.
Jude Lopez Sr, the father of the Jennifer - a woman who factually packed up the children, taking them across International borders  with her new husband to avoid compliance with a temporary custody arrangement that she was signatory to- has the microphone.
It is rather topsy-turvy that his interviews include portions where he is expounds as though he is also spokesperson for the Miller family. Beyond his rehashing the accusations against the man his daughter chose to father 3 children with- he is then allowed to conjecture as to why the Congressman and his wife were involved for any reason other than love.  I wish there was a way to explain to my former friends that in this, the press is not their friend.
What Mr. Lopez is the perfect person to explain what his family was thinking when -
One week after Jennifer fled with the children, Elizabeth, the daughter of Congressman Gary and Cathy Miller, and aunt to the children, died at age 33. The following day, the Lopez family picketed Calvary Chapel of Golden Springs- the home church of the Millers. 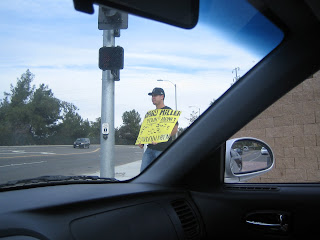 In hindsight- Would they have allowed the congregation to mourn Elizabeth in peace?

Email ThisBlogThis!Share to TwitterShare to FacebookShare to Pinterest
Labels: Current Events, lessons from the garden

Thank you for posting the story and the article about the Miller's grandsons. I did note in the article that the author of it didn't get her fact straight in that Jennifer and Brian were not married.

I pray that all this works out for the best for those children. I have not seen Mr. Lopez on TV or on an interview since all this first happened. Don't think I could stand to listen to him again!

Thank you for your thoughts, Trisha.

Someone made an honest mistake on a report that has now been repeated ad infinitum. Unfortunately- when a mistake is in the lead paragraph- its not good in building credibility- it's like weeds in the front garden. Do you trust what follows?

It's a sad story all right, and we can only hope those responsible are going to pay their share! So sorry for the kids.

On the other hand, you pictures of the flowers along the sidewalks were soothing. I saw some workers planting a curbside flowerbed in downtown Grants Pass yesterday. I'll take a picture when it's complete!

The "truth" .. how simple .. in relationships, in reporting, in the law, in politics, and in RECIPES!!! LOL, kidding on that part. But, really, being honest and telling the truth is the way we all should live. Looking over your shoulder or contemplating the next lie.. no way to live.

Sue- There are only two ways I want to be lied to. One is by Mr. Scale and one by Mrs. Mirror.