It must be the food in the last post looked so good: the Internet ate this last bit):-
﻿﻿

Back for one last taste of Baby- Bingo bash
This  scene brought back memories. Uncle Frank didn't like being a landlord. So when he and Aunt Doris sold their apartment building, rather than splurge on a couple weeks in Hawaii, they moved to Huntington Beach for one magical year. Living at the base of the pier, Uncle Frank got a pair on binoculars to sight- see from his deck. Aunt Doris had the first microwave oven of anyone our family knew.
﻿ Beach living in California isn't all ocean views. But when you have neighbors with stained glass windows featuring cranes and sailboats, there are advantages to being packed in. You get artwork to enjoy. For no additional cost):-

A young family's home should include touches of humor. Because Chris and Gennina are down to earth, thrones in the entryway work. Custom crafted in Texas, "The chairs were given to us by one of our friend, Johnnie MacDonald. Chris's throne was given to us on our wedding day. Mine was given on our 1 year anniversary. " Beneath the Pirates of the Caribbean-suitable  family crest a prince's chair awaits baby Joseph's arrival. 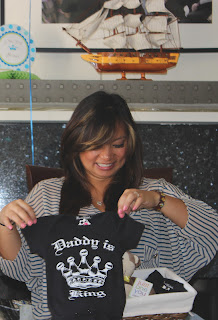 The family embraces the inside joke with more royalty- themed baby wear. 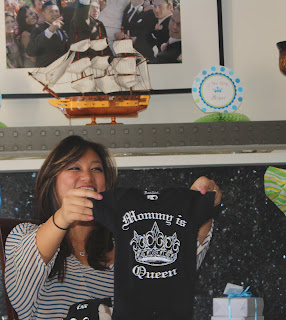 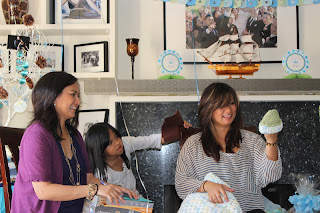 What's a baby shower without the crochet hooks getting busy? 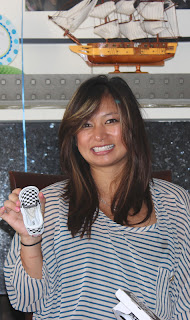 Or tiny shoes (that may be too big when baby arrives) 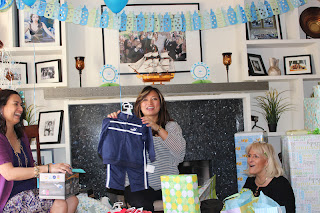 The Baby even got a jogging suit that matches his daddy's 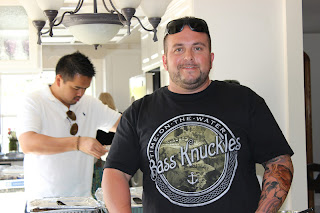 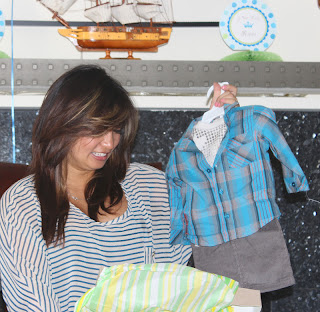 When Jonathan debuts- it is with quite a wardrobe.
But as good as the party and the gifts were- this party was a success because the celebration brought family and friends being together in joyful anticipation. 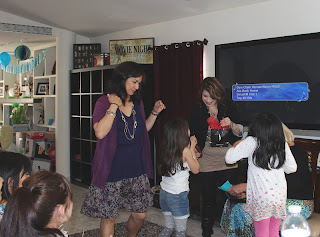 Cheng's Daughters name is Vanessa and Jessica Hernandez's daughter is Samara.
Children taught moms how to boogie
The young couple's family orientation is exemplified in how they solved the common decorationg dilemma: the "great white wall" that came with their honeymoon cottage on the beach. Gennina related how this memory wall came to be, "We came up with the idea to put a cork board... Chris and Kenny had a ritual to go fishing every Saturday." Originally thought that the wall could be used as a backdrop to display "every fish that they caught.... we ended up putting pictures of our family and friends as memories for Chris and I."

Thank you to our youngest son Kenny-  for demonstrating uncommon loyalty.  What a blessing it is to be in a position to be 30ish  and already have friendships, such as with Chris, a quarter of a century old. When you and Shannon are ready to expand your family, that devotion will see through the changing seasons of marriage.
Posted by Lydia at 11:48 PM

What GREAT Gifts! And what a Beautiful Afternoon, Lydia. You have such a splendid fsmily....It is Beautiful to see....Thanks for sharing all of this wonderment!

Your comment about those thrones made me smile. Bet they have a lot of interesting conversations about that.