Leaving The Virginia Robinson Gardens for The Ivy Restaurant 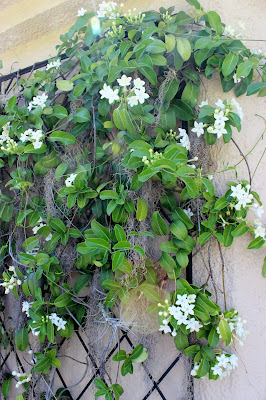 There is soothing beauty in repetition. The pyracantha in the top image is clipped to a diamond pattern. The Madagascar is threaded and allowed to hang through with Spanish moss on a trellis. 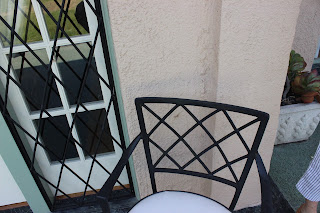 The diamond pattern repeats on outdoor furniture and other iron work. 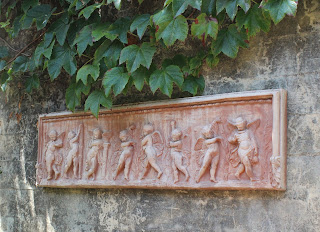 A bas relief panel is characteristic of Beaux-Arts style.  Together with overhanging
greenery , it relieves a wall of stark dreariness. 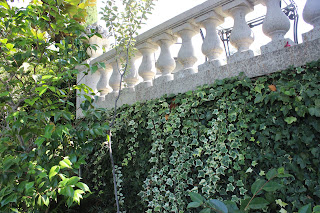 The mixed ivies peaking out from under heavy balustrades. This adds all the charm as if the garden were a cake and giants came through and super-sized the swagging. 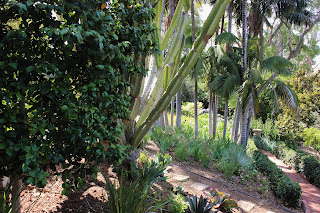 Virginia Robinson's plans were to have a cohesive Mediterranean garden. However her property had other plans. 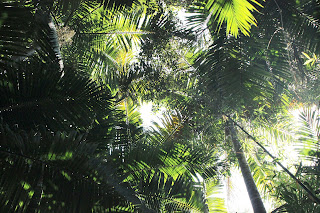 When the Mediterranean plants repeatedly insisted on converting into layers of compost, a guest suggested Virginia try King Palms.


Not being the timid sort, Virginia grew the largest grove of King Palms in North America.
In later years, she insisted on going on her own to read. Unbeknownst to her, a very thin maid followed from a discrete distance. If the doyenne fell- assistance would be timely. 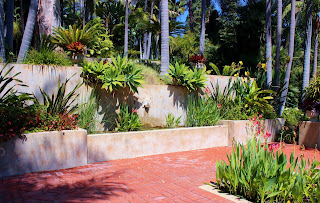 As the tour winds to an end, the interest keeps on coming. A wall fountain feeds a pond filled with water lilies. 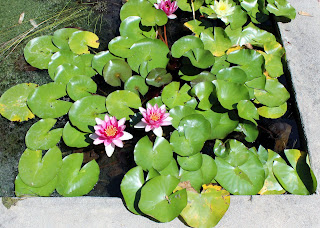 The soul needs beauty- but the body needs nourishment. This was my excuse to join a special friend for lunch at The Ivy Restaurant on Robertson Blvd.  I specifically did not ask the photo policy because I so wanted to share  how absolutely romantic a tiny little cottage plopped on a major Los Angeles city street can be. Learn some lessons on how to create the ambiance in our own homes. 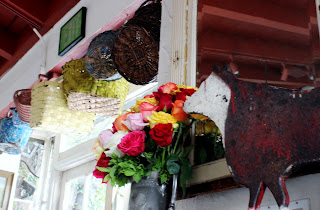 First- Being swept away is romantic. The imagination needs to be queued. Farm animals and implements, such as baskets and enamelware, may be even more romantic when they are in as unexpected place as in Los Angeles on the border of Beverly Hills. 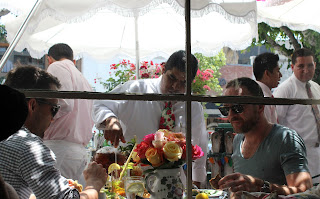 Chivalry is romantic. As is good service. By courteous men. Lots of them wearing rose fabric ties with nothing on their minds but bringing you pleasure. 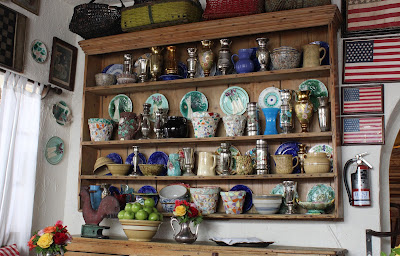 A life well-lived is romantic. It is full of roses and collections brought together not for how they match visually, but for emotional impact.

I particularly love the use of flags in restaurants. There is an authenticity to how they tie in the history of the proprietors to place. 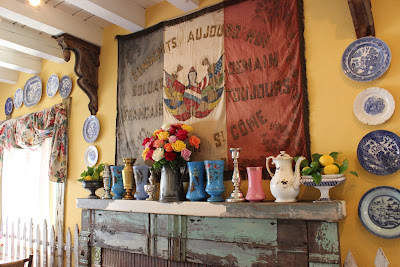 There are very few rules in true romance. But if I were to advise young lovers, I would say to be concerned with practicalities is decidedly un-romantic. There is nothing practical about a patio open for business to be stuffed with umbrellas. They squeeze out a table or two of potential customers. There is everything romantic about vases stuffed with a rainbow of roses with mint for greenery.

To demonstrate the importance of color and pattern I want you to look at this salad and imagine it on a white plate-  because the imagination would be quieted, the appeal would be, too. 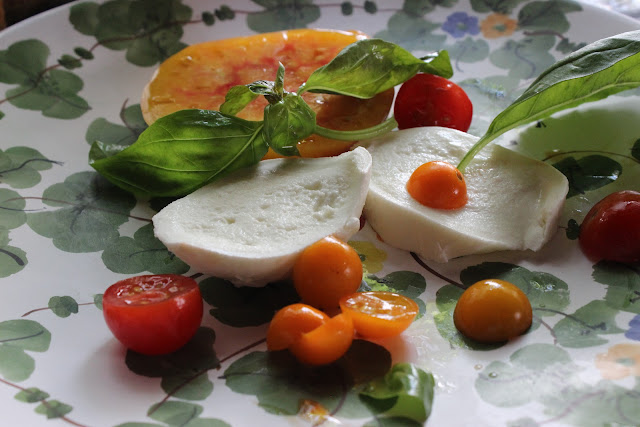 Email ThisBlogThis!Share to TwitterShare to FacebookShare to Pinterest
Labels: beauty in the garden, Culture, Food and Wine, Garden Hints, lessons from the garden

Lydia, between your first post of the home and gardens and today's along with the Ivy again, I've decided I will soon make the trek to Beverly Hills to partake in one of their tours.

Thanks so much for tuning me into something beautiful in the greater L.A. area that I never knew existed!

You've also, although unknowingly, have reignited my desire to go to the L. A. Botanical Gardens where they used to film Fantasy Island. Living here over 65 years and never have been there, either. When the heat cools down, those two adventures await me.

Your devoted reader in Seal Beach.

Virginia Robinson was an 'artist' in her own way, wasn't she? So are the people who own and run The Ivy Restaurant...!
This was a GREAT treat, Lydia.....Thanks so very much!

I loved the gardens and especially the kissing palms named after Virginia and hubby.

The quaint little restaurant reminds me of the adorable tea house Lady Divas that used to be in Brea. Sad it closed.
I think one of my favorite luncheons was when you took me to Huntington Library in the Tea Room. Tha was so delicious and quite an experience!

What a delicious day you've had!