"It's all about people. It's about networking and being nice to people and not burning any bridges. Your book is going to impress, but in the end it is people that are going to hire you." 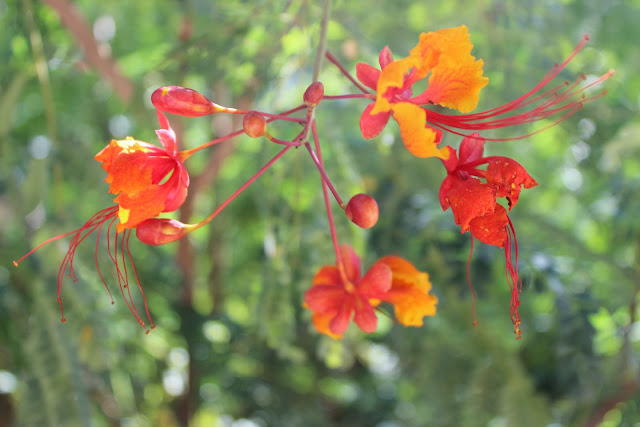 Widely adaptable, the Red Bird of Paradise Caesalpinia pulcherrima immigrated from the  West Indies . In bloom, it it sparkles up the Sonoran Desert, particularly in hotel landscapes. 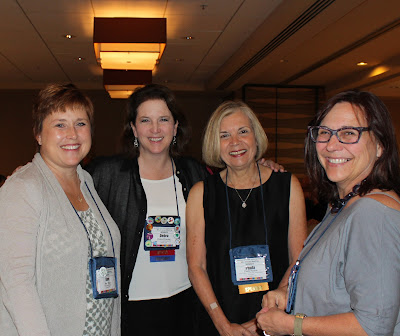 These gals are morning people. (L-R) Dee Nash of Red Dirt Ramblings, Debra Prinzing, authoress and GWA President, Paula Panich Linsman- simply the best writing teacher I've ever had and Lorene Edwards Forkner, the new editor of the venerable Pacific Horticulture Magazine who is taking everything wonderful about the publication and then kicking it up a notch. 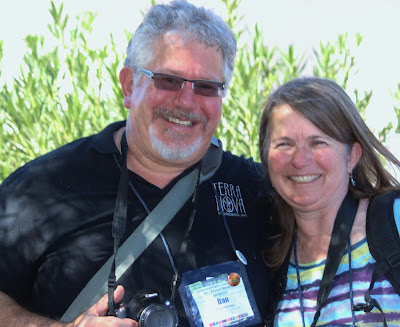 President  of Terra Nova Nurseries Dan Heims  is a plantsman, speaker, collector, breeder and dreamer.  Having introduced 700 or so new plant introductions to the world, I'm hoping he gives the girl he danced with on a street corner in Eugene, Oregon (that would be me) the first interview when he surpasses the plant patent world record held by Luther Burbank.  Roughly 100  more "hits" and the world we be an even more beautiful world for his plant obsession.

With Dan is  garden journalist/ landscape designer Joan Bolton of Santa Barbara Garden Design . Fluent in both English and Plant Latin- she was a dream roommate for the Symposium.  We are very encouraged to see her market segment up-ticking as her clients are once again willing to be more adventurous with their landscaping design dollar.

Foodie Alert: Joan's daughter ~ the beautiful Laura Bolton ~ is producing the fabulicious  food blog Fork Knife Swoon.  Get thee to her site before some publisher/ producer ties up all her time. 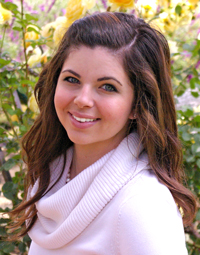 Raised among the avocados not far from  Santa Barbara, Laura's food is like her. Stylish, fresh and approachable. Her  web images are frame-ably fine.

While she doesn't look old enough to have lived a previous life, in it she produced the most beautiful renderings for the exclusive San Francisco design firm BAMO, who recognized her talent straight out of the UCLA Extension/ CSU  Pomona Joint Masters Program in Interior Architecture.

File this under its a small world. Before I met Paula Panich, I interviewed her daughter,
Ilana Panich Linsman .  Then a college student, today her portfolio includes work for the New York Times. From the first blog post I ever wrote, in August 2007

"There are many people I will thank over time for this new adventure, but for right now, I would like to thank the Madrid based photographer, Ilana Panich-Linsman. I met her when I was Editor of my hometown newspaper, The Windmill. Immediately after she graduated from Scripps College in Claremont, she gave up her summer to raise funds to purchase medical supplies for those whose lives were disrupted by Hurricane Katrina through Bike Across America. I remain in awe ."
Posted by Lydia at 12:09 AM

Being a 'lover of food' I am now following Laura's blog. Thanks. xo

I too went to Laura's blog. It's strange in that I hate cooking but am always looking at recipes and listening to and watching others cook delicious recipes.
Guess I just love simple creations where I don't have to spend hours in the kitchen.
Laura is certainly a little beauty! She looks soooo young too.

YOU were the dream roommate! The symposium was a blast, and your positive energy and enthusiasm for every aspect of the event helped make that happen.

Whether it was chatting up old friends or meeting new ones, or attending the garden tours and seminars, you were definitely a bright star!

Thanks also for the props to my darling daughter. I am one proud momma.

Thank you to my first three commenters. Joan- I look forward to your daughter's future success. To be so beautiful, smart and talented. God certainly blessed the world with her presence.

Lydia - what a wonderful story of the threads of these seemingly geographically distant lives that in truth are a beautifully whole fabric. It was a pleasure to meet you in person.

Thank you so much for your kind words! "Raised among the avocados..." - I love it!