In 1769, the Spanish Crown authorized 21 missions to be built from San Diego northward. Each was a day's ride by donkey. The missions were not only an exercise in spreading Catholicism: the national interest included the political motive to forestall Russian colonization of coveted territory.

Huerta (pronounced Where-tah) is Spanish for a kitchen garden.  Even in hostile territory, man cannot live by bullets alone. Every settlement required a fertile space, with access to water and reasonable protection from marauders be dedicated to food crops.   Seeds from the new and old worlds were tended with prayerful reverence.

While the actual Mission Era was bracketed within 65 years- its effects are the foundation of modern California commerce and culture.
Fast forward a couple centuries

As dawn was breaking on June 29, 1925, a 6.8 earthquake violently shook beneath the Santa Barbara Channel. The nearby earthen Sheffield dam; the ground beneath it liquefied. The dam collapsed; a knee-high wave of water shoved cattle and all which lay in its path to the sea. Downtown Santa Barbara's buildings trembled until most of what remained was rubble. The mission was slightly spared, its facade significantly damaged, the collection of statues- destroyed.

Three men were singled out as civic heroes for turning off the city gas and electricity on that day, preventing full-scale destruction and carnage. The civic fathers and citizens used the opportunity to re-brand the city's architecture from mostly Moorish to Spanish Colonial. 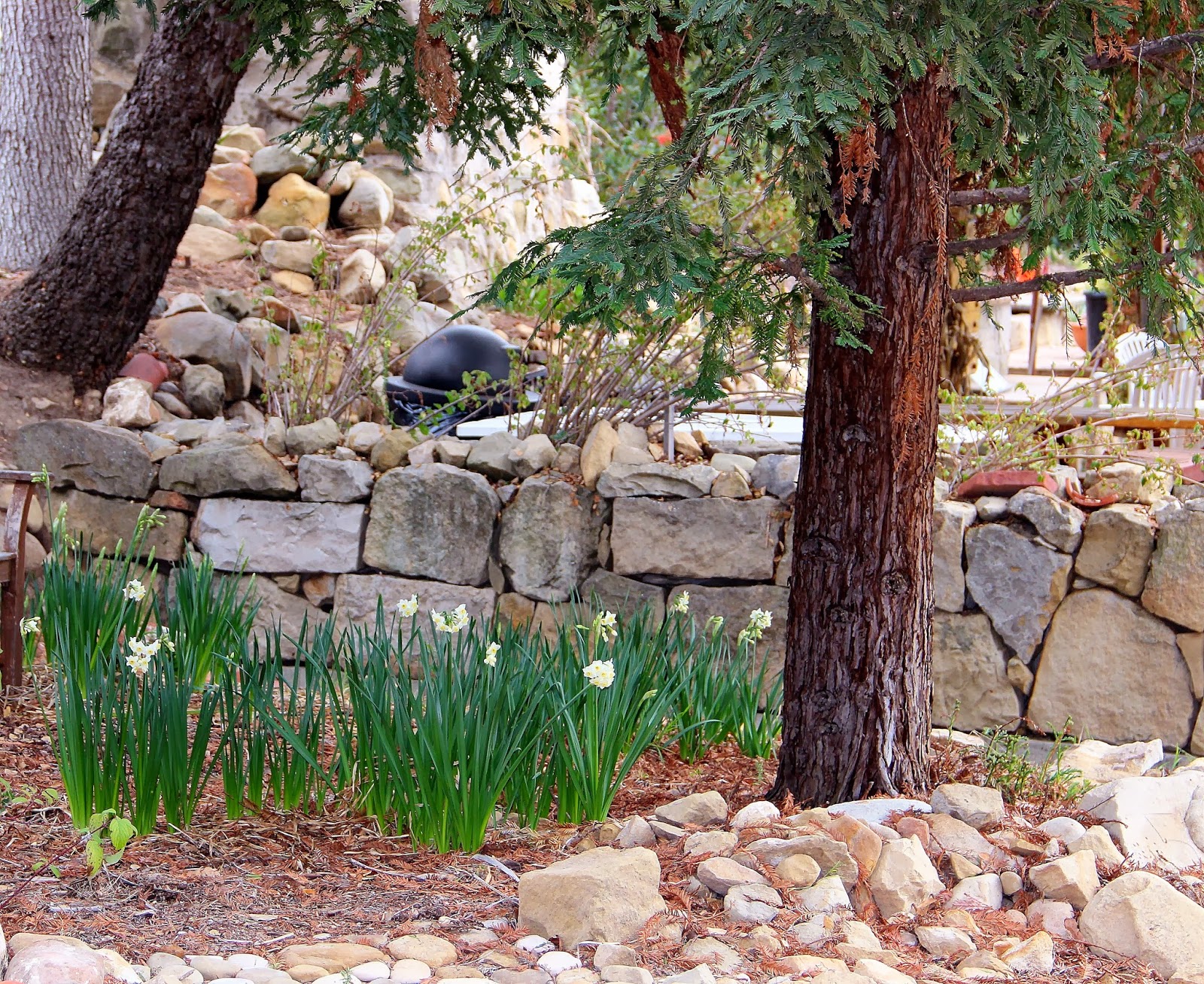 The land near the mission was not a priority.  For some decades, where The Huerta now flourishes, it would have fairly been described as a dumping ground. However, you can't keep a good garden down. As a family's culture is expressed in the meals we serve, California's civic history is most authentically expressed in horticulture.

When the time was ripe,rubble was reclaimed from the neighborhood, re-purposed into walks and walls. The terrain tamed into usable terraces. In 2003, the La Huerta Historic Gardens project officially kicked off.  Jerry Sortomme,  Professor Emeritus of Environmental Horticulture at Santa Barbara City College was named La Huerta Manager.

Citrus were grow from seed

Not all produce was consumed.  A portion must be saved to parent future crops. 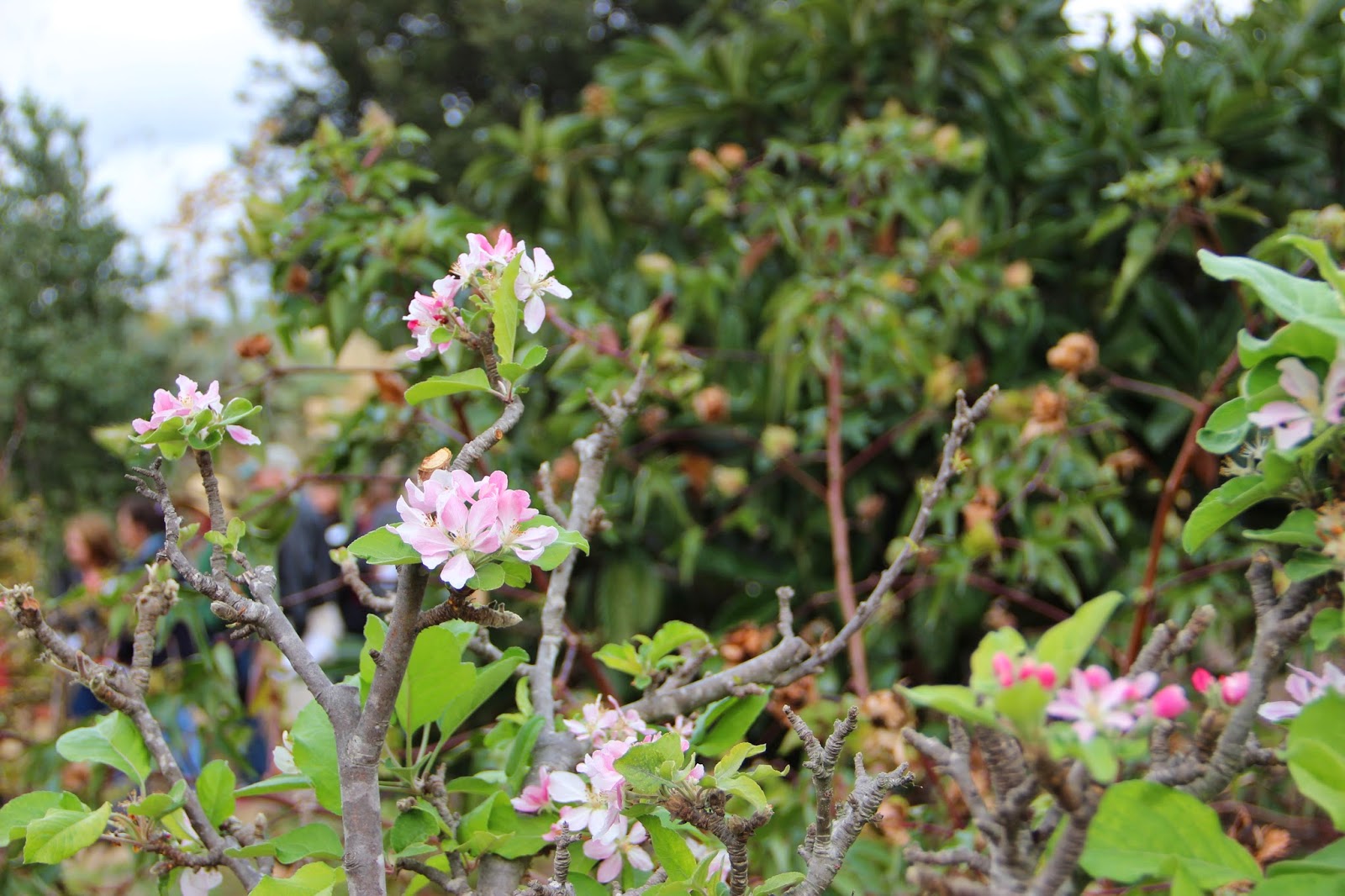 Apples are not a crop associated with low-chill California coastal communities, but the Anna Apple, developed by Dr. Ein Sheimer in Israel, thrives at La Huerta. 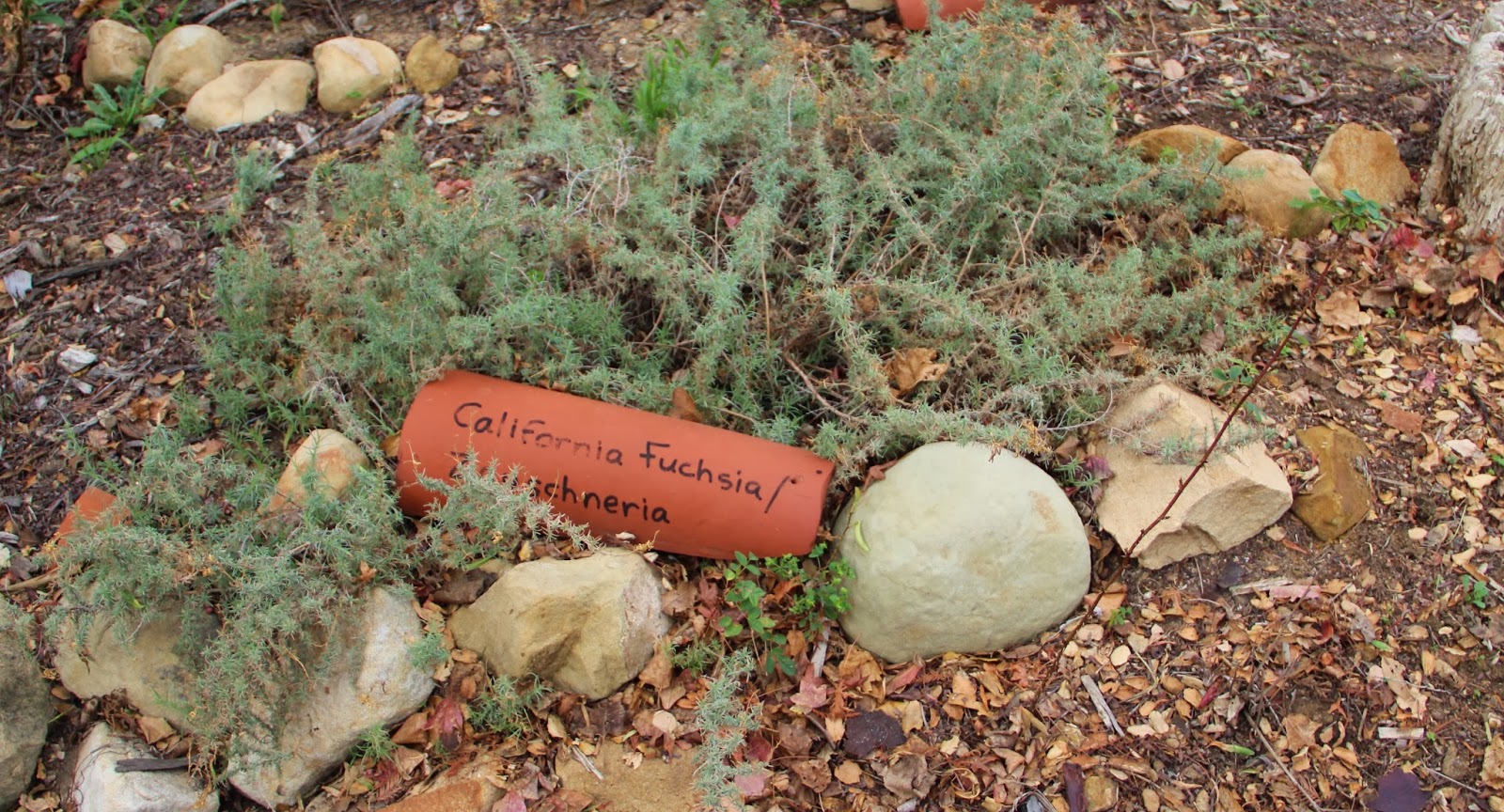 The use of spare Spanish roof tiles to mark plant names is a practical take-away  from the garden.

Not just for plants which are showing, 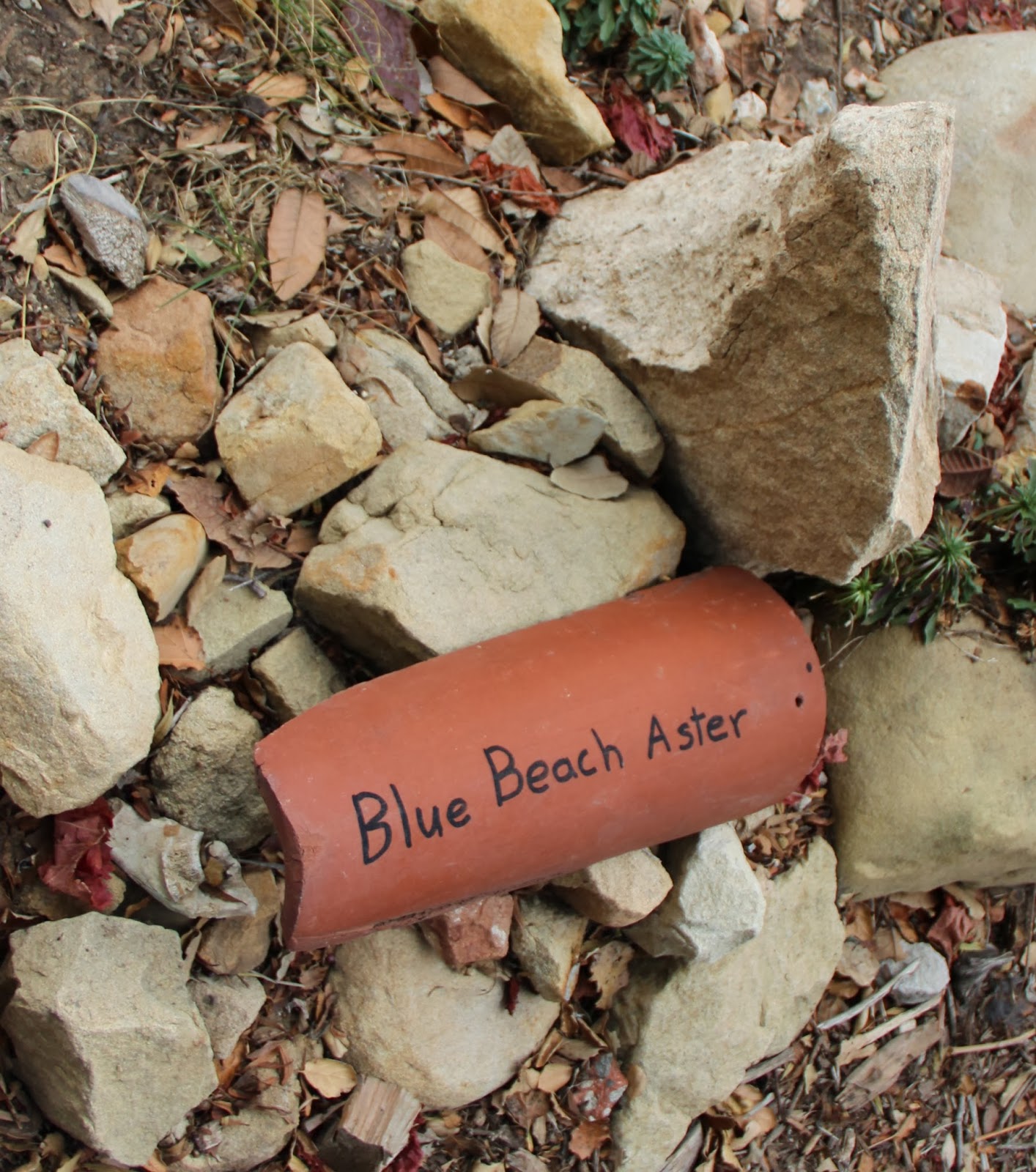 But for dormant plants. Or to hold a spot in the garden. Here, the common name of seasonal aster marks the spot of what will follow is written in English 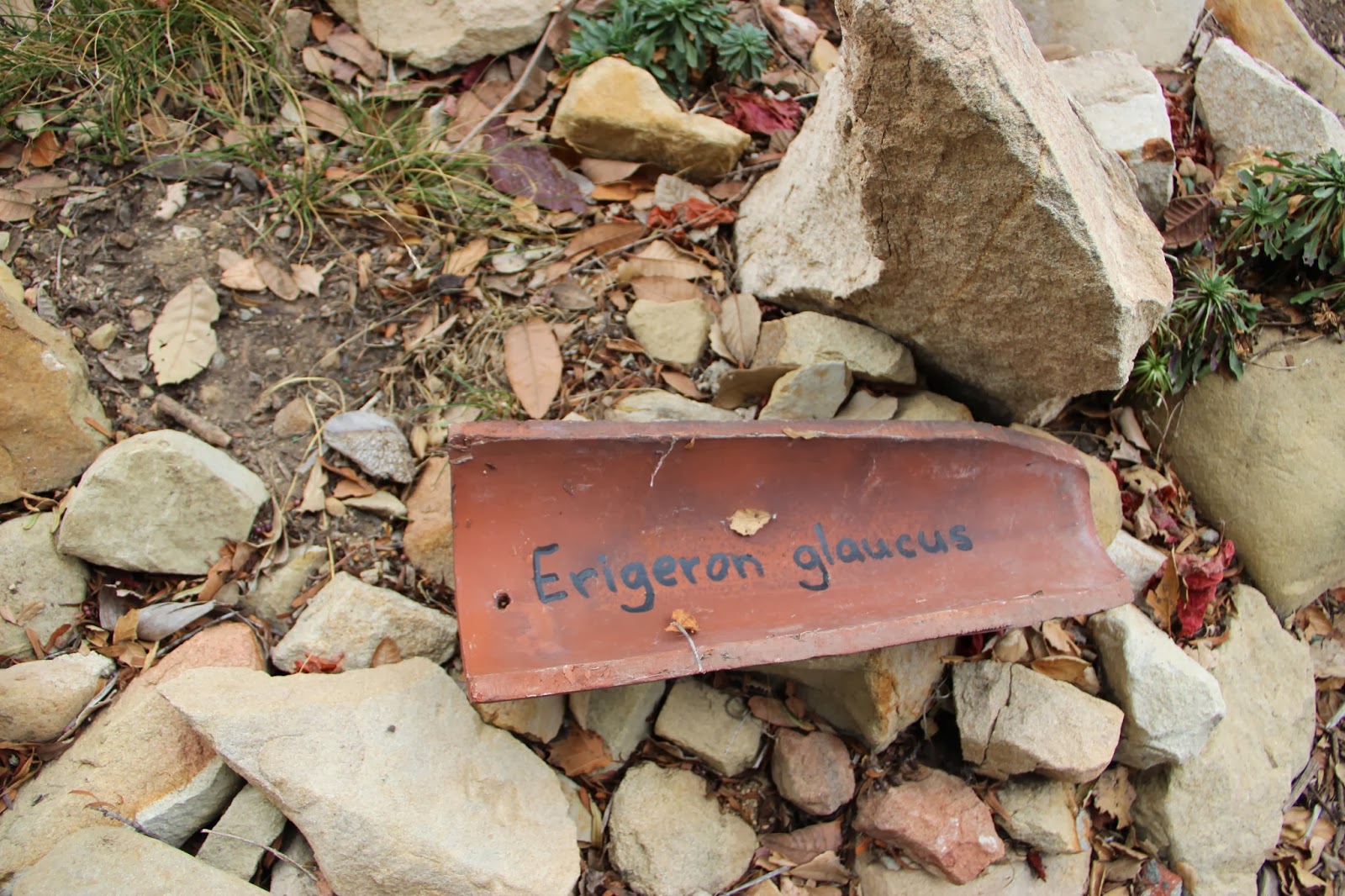 On the tile reverse, the Latin designation is neatly printed.

*Note -  When turning tiles over, be careful of what might be hiding underneath. Spiders like dark spaces.

We were honored to have Betsy J Green, a well-regarded local  history and garden writer who volunteers at La Huerta. She joined Jerry to assure the dozen and a half gardener communicators that our bushels of questions would be addressed as quick as we could think of them- or e-mail later. 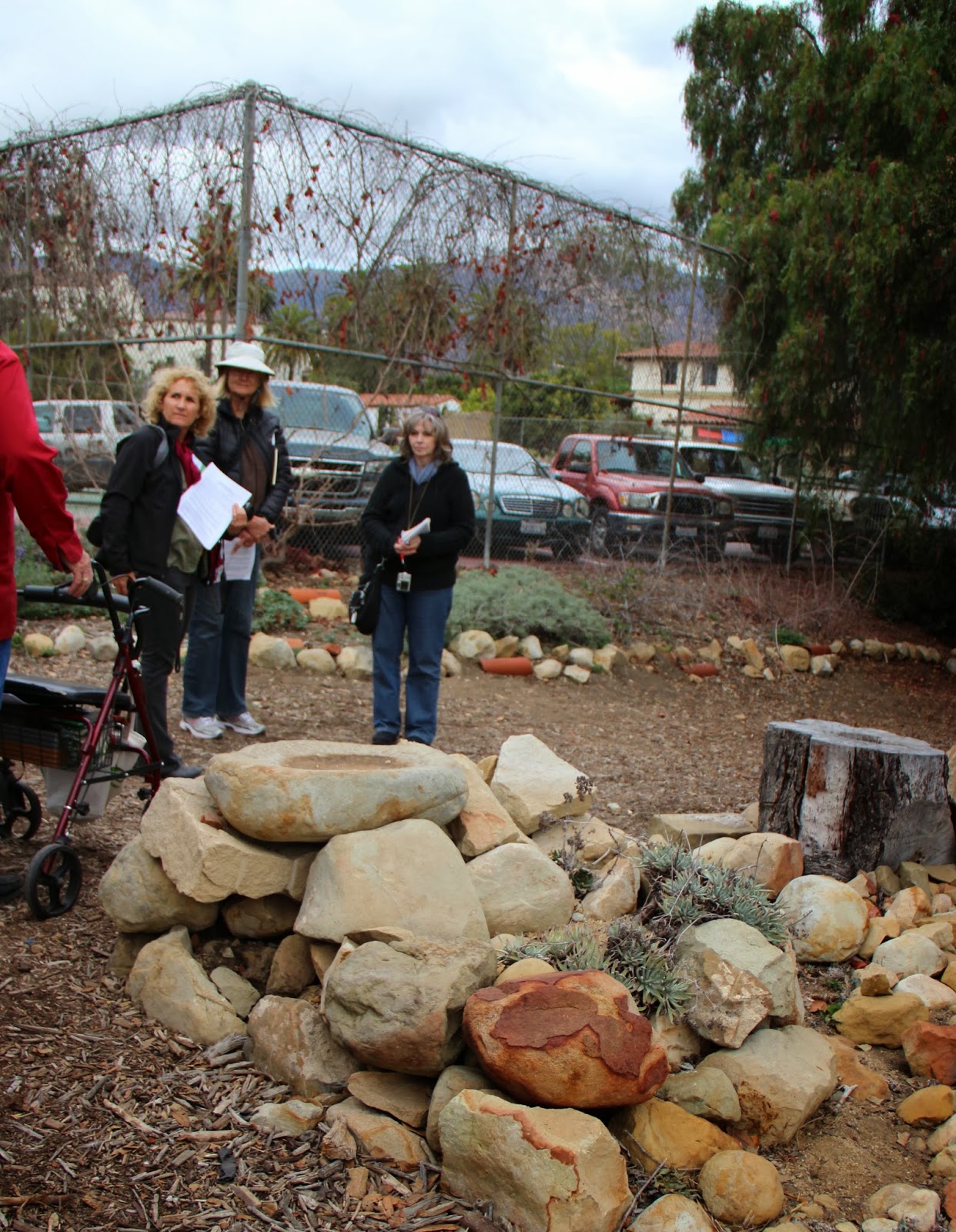 Archaeological sites are treated far differently than back when I was a child. In the 1960's, it was no big deal to take souvenir gleanings. At that time,  a construction worker at Santa Barbara City College took part of this assemblage home. It moved with him to another state. And back. Realizing, a couple decades later, that the fashioned rock was best kept in public hands, he returned the item to the professor. 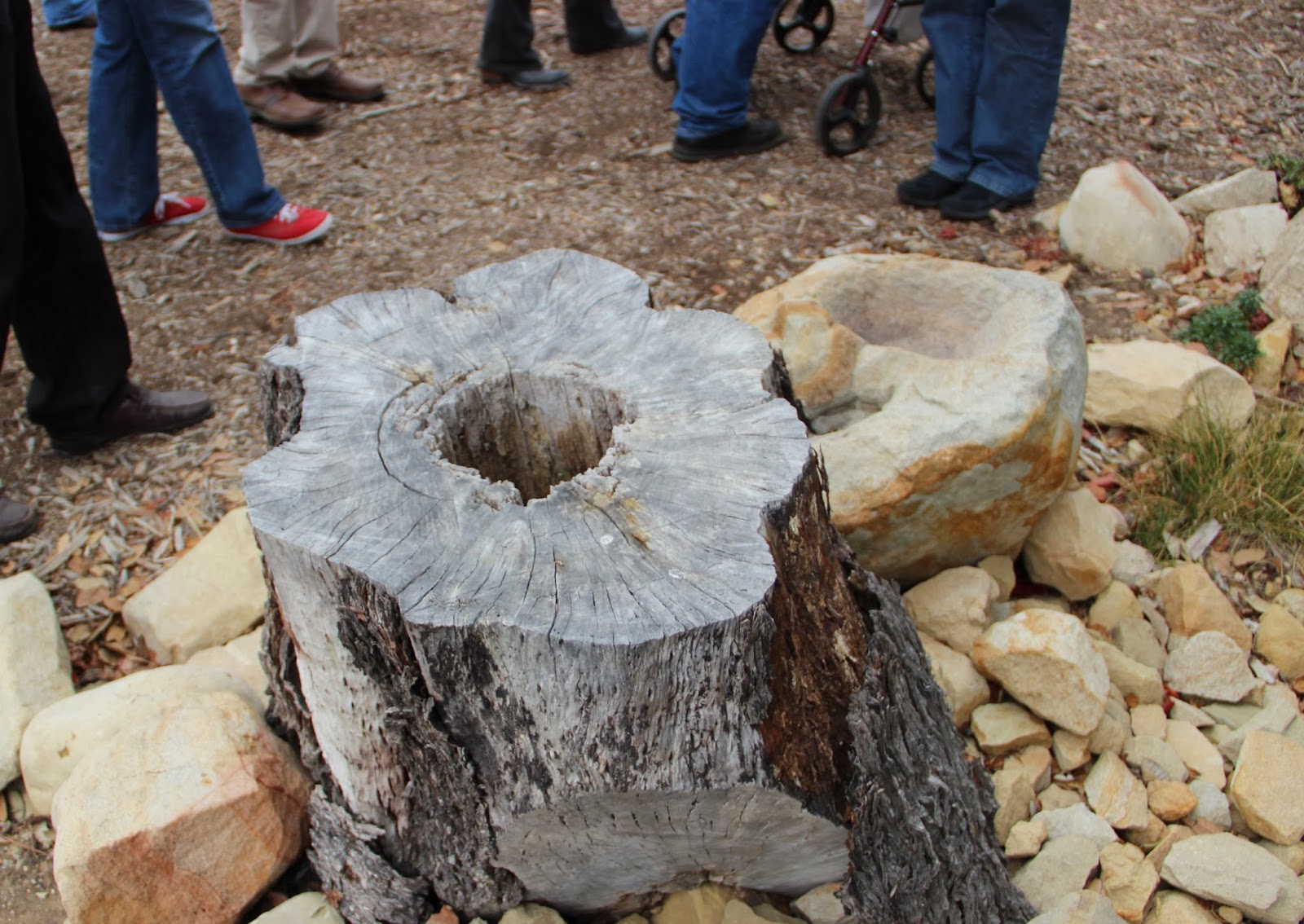 The rock was stored at the Environmental Horticulture Department for years.
OMSB Director Tina Foss determined the rock was  Chumash era- or earlier- it
was approved for viewing at Old Mission Santa Barbara. It became part of a history-scape presentation. Which is like old school dioramas- only way cooler. These displays are life-sized, contain authentic material and you can walk right up.

Likely, the rock was used to grind acorns and native grains- corn came to this part of the world after a pestle ground the rock's concave indentation. What was the stump used for is not known, but certainly sparks conjecture. The state of our sense of wonder was now reborn. 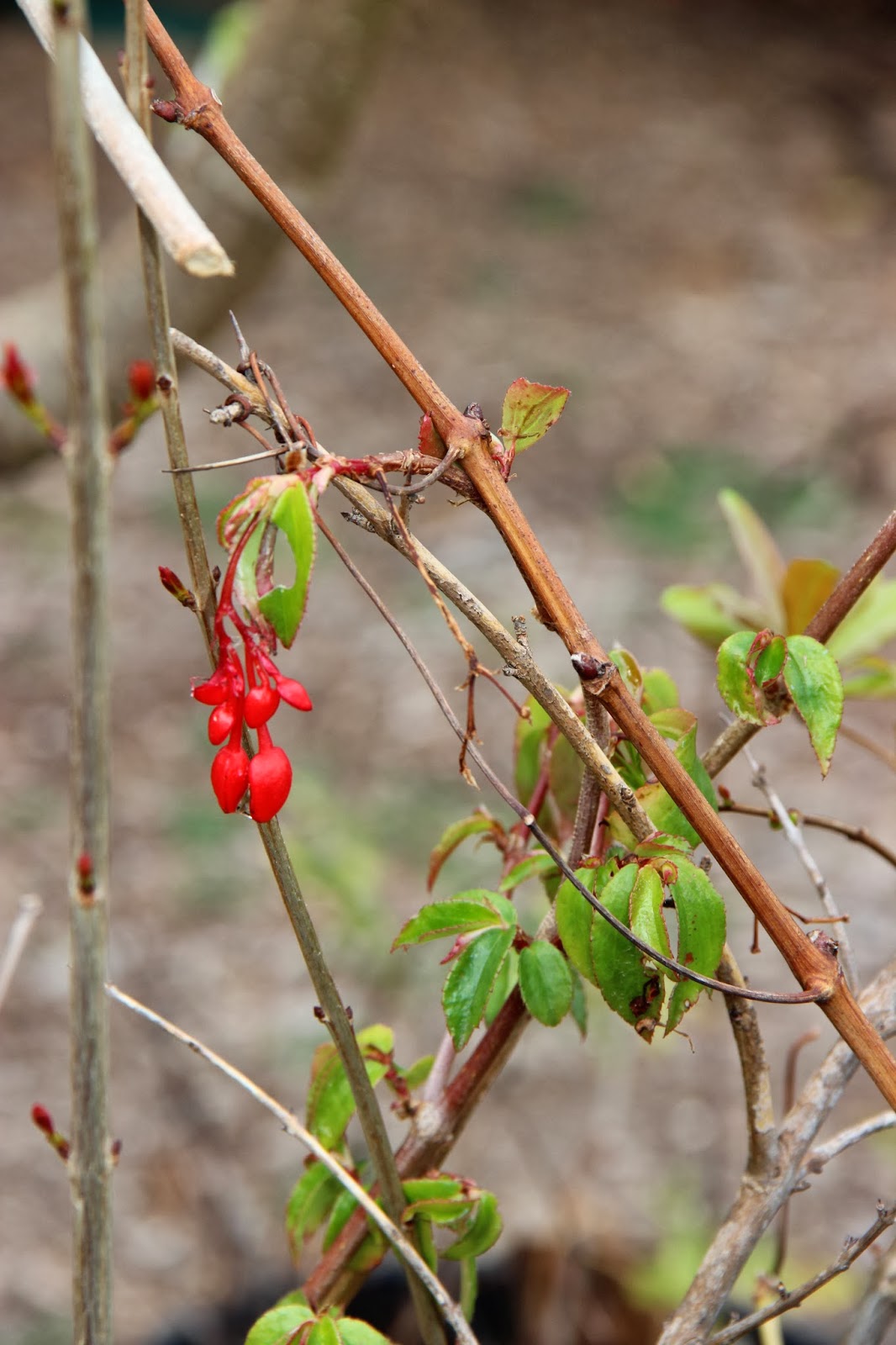 When the Professor asked the premier begonia expert of the time, Rudy Ziezenhenne if any American indigenous begonias were used in Alta California missions, he was presented with the species 'Blood of Christ' or in Spanish 'Sangre de Cristo'.

The common name denotes the resemblance of unopened red flowers to drops of blood. The symbolism of stems gathered in church vases needs not explanation.


La Huerta is located in a restricted zone. Tours are limited and by advance registration only. Please link to the contact page.

It's so nice of you to share your garden tour experience...very informative and I felt like I've been down there with you that day too:) Love those beautiful stone walls! and the roof tile marker is a great idea too :)

So much History I did not know about. Santa Barbara is a fascinating place......I LOVE those tile pieces as Markers....Lovely idea and they look so very pretty, don't they.

Thank you Simple Living and OL of the Hills for writing in.

Dear Lydia. I've been saving this post to savor and read at my leisure -- you've given so much detail to our short visit in this historical garden. But, alas, it's taken until now before I've had time to do more than wish for time to dig in.

And I've wanted to get Betsy's full name. Such a kind and helpful person.