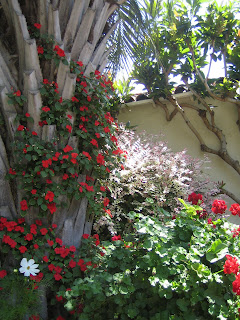 In the garden- everything can be put to good use. It's the same in life.

2008 was the year of broken bones, broken promises and goals not reached. People I loved and assumed could be counted on are gone. By death, divorce or other design, members of my family come to accept the disappointment that people we love are quite willing to let us go.

Could- have, would- have and should-have- these words are wasted exercise. 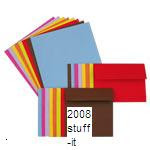 Better to exorcise. Regrets, disappointments, fears- list their names on scraps of paper.
Stuff into an envelope. Before lighting the New Year’s Eve fire, seal the envelope- then use it as a torch. Toss it in and imagine the flames purging your life of what is best left behind. Raise a toast that the old demons are now reduced to ashes. Promise to God to use what is left to build a more beautiful future.
New Year’s Day, the logs and paper will have converted to charcoal and cooled. Collect in a bucket and escort them to their next home- perhaps to the vegetable path.
Soil loves to be enriched with the cast-offs of our history. Calcium from breakfast eggs hells. Leaves blown off the crepe myrtle trees by winter winds. The ashes from the fireplace. When we till these offerings into the soil, Mother Nature works her magic with them, turning what some only see as trash into nutritious soil on which a beautiful garden will flourish. 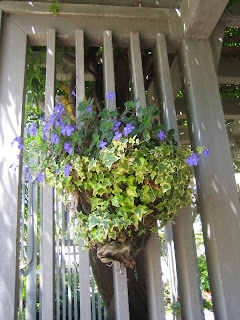 New Year's Eve, 1974. I was at New Year's Eve Party in Belmont Shores. To the outside world, I appeared quite happy. Inside, I was mush. Lonely mush. A gallant young man had galloped through my life- I hadn't seen him in exactly one year- so of course I was pining after what I could not have. Alone on the chilly deck outside the party, I decided this pity party was really boring- quite non-productive- I promised God I was ready to move on.


At that exact moment- a friend of a guest came out to check on me. What I thought of at the time was a low point in my life- I now understand was a bounce point. This new young man- Gerry Plunk- we've been married for 33 years. The stuff with the other fellow- it turned to compost. 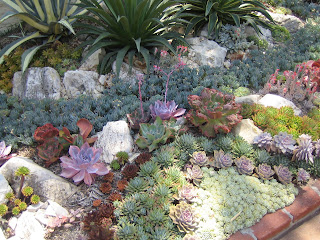 The Garden Photographs were taken at the Sherman Gardens and Library in Corona del Mar. Each was chosen as proof that circumstances should never be allowed to get in the way of your desire to connect with nature. The one true connection to nature- is through the garden. No ground space- go vertical like the impatiens planted up the palm tree. Or hang a pot. Lack of water- humble succulents can be beautiful.
Admiral Envelope has a rainbow assortment of different envelopes which can be viewed on http://www.admiralenvelope.com/index.php
Posted by Lydia at 6:36 AM

Email ThisBlogThis!Share to TwitterShare to FacebookShare to Pinterest
Labels: attitude, lessons from the garden, Remembrances

Lydia,
As I read your post I was thinking of my own life and a family member who has not only disappointed but shocked and hurt my family nearly beyond repair. Good advice. I will try to take it. I have too many other wonderful people in my life to let it get me totally down.
Thanks for that.
Sooo, you met Ger on New Year's Eve? My parent got married on New Year's Eve 66 years ago tonight.

Well, John and I will have our annual date night of dinner out and a movie! Looking forward to it. It's been a wonderful Christmas season even tho I have been under the weather! Too many good things happened for me to let it bother me too much.

HAPPY AND HEALTHY NEW YEAR TO YOU ALL!
XO Trisha

Yep. Gerry came as a guest to the ski club I was social secretary of. I spent most of the evening introducing him to other women. Kept trying to set him up with my girlfriends.
I don't know that time heals all wounds. But time allows us to convert life's tragedies into something useful.
I have found it remarkable that the two best attitudes towards life have been with those who faced the greatest personal physical devastation- amputation. One gentleman described it as a moment of rebirth- for he appreciated and loved with greater depth afterwards than before. He could have kept his limb- but he would have died. That interview was an inspiration that will be with me as long as I live.

Lydia,
You accurately reflect the sorrows and joys that are part of life.

The envelope is a great idea !

Happy New Year to you too, Annie!
Keep those restaurant reviews up. Even when I can't get away- they inspire what I do in the kitchen.

I so agree with all you said, Lydia....Regrets? No point in them...as you said, a waste of everything, really....
LOVE what you said about meeting your gusband and the other relstionship going to the compost heap!
Nothing like Nature. It is the key to everything!
HAPPY NEW YEAR, MY DEAR!

Compost is good. Both my husband and I are far better off that we got some of our youthful stupidity out on other people. I wish that former beau and his family all the very best. I hope he does the same for me and mine.