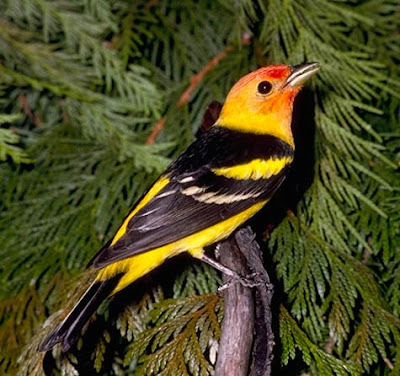 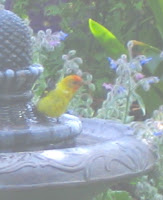 Bathsheba looked no more beautiful to David than the Western Tanager which inspired a communal bath at the fountain yesterday.
From my kitchen window, I did my best to capture the plumage as the avian played hide and seek with the fountain finial. So beautiful. There were lots of friends splashing about; but they were more camera shy. Perhaps worried of what kind of shot the woman aiming a device at them might be.
The fountain was an anniversary gift from my mother. There were times when I thought about replacing it with something larger- something with a deeper bowl that wouldn't need to be filled so often when the weather is hot.
Now that my mother resides up-above, I am permanently at peace not to have "traded-up". Shallow water surrounded by a lip to preen on . An unobtrusive finish. Just enough water gurgling from the center to help sound where healing waters are. On the bird rating scale, such a fountain is a "10."
That my mother chose a fountain with the needs of the birds first is testament to her lasting wisdom. Manufactured fashion flies in and out of favor. When adding to the garden- function first, form follows. That is the recipe for a gift to last beyond the earthly life of the giver.
Top picture of the migratory Western Tanager is courtesy of the Royal Albert Museum of Alberta, Canada.
Posted by Lydia at 7:50 AM

Email ThisBlogThis!Share to TwitterShare to FacebookShare to Pinterest
Labels: beauty in the garden, lessons from the garden, nature

I too enjoy the feathered 'fairies' cavorting in the birdbath! It's not just bathing, but seems to be pure enjoyment.
Thanks L.
xo
Oregon Sue
P.S. Which reminds me, best fill the birdbaths since no rain on the horizon.

I think you did miraculously Lydia....He is dear, beyond words. And to have been able to capture him with your camera--Fabulous! What a wonderful thing that Fountain is---yur mother knew, didn't she? And to think of her every time you look out and see the Birds so happy....Truly Sublime!

What a darling picture. LOVE that birdbath! So glad you didn't trade up and get something larger. What a great sight to see when you look out your kitchen window! You must keep your camera ready at hand for moments like that.

Lydia,
Fantastic picture of the bird, and so glad that the fountain is perfect for him.
I do believe that your garden is blessed:)