Thinking Green- Showing Love in the Every Day

In order to love simply, it is necessary to know how to show love.
-- Fyodor Dostoyevsky
Love is shown in how the details of living daily are expressed. 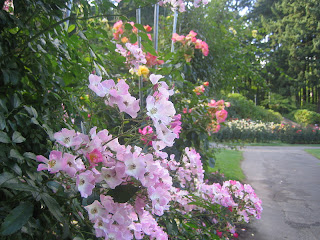 One repair leads to another. Even the most careful craftsmen cannot work without creating some collateral damage. It is now two months of home and garden convalescing from the fumigation. It has been an opportunity to re-think elements of the garden setting.


The gateway arch protecting the pathway to the back door began its life as a standard big-box cedar archway. Not quite as wide as the side yard opening, my hunky handyman husband amended its frame with shelves to broaden its footprint to the full width of the garden opening. Alas, the archway had fallen victim to the heavy fumigation tent. 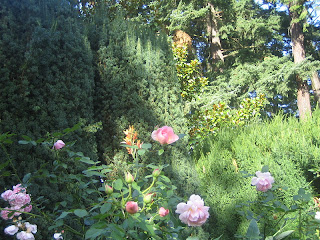 I suppose we could have avoided the structural split by having moved it before Western Exterminators arrived. However, as untreated wood pieces might harbor critters intent on literally eating house and home out from over us, it stayed. At its side, the firewood was restacked against the house (with the help of the fumigator crew, thank God). We left our home in good hands, with a prayer that any collateral damage in the war against  termites could be made right.
It is now 2 months later. Our neighbors are saints, watching us munching at repair and renovation, moving around the permimeter, slower than snacking snails. While our neighbors waited for the injured arch splayed on the driveway to be repaired, repainted and stood back up, it was our opportunity  to refresh the naked retaining wall. 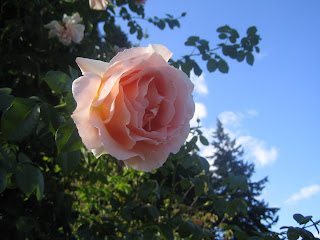 Some things cannot be planned to perfection. Experience has its place. Blue seemed alright in theory. It is my favorite color. Our house is blue. There are blue tones in the driveway paving stones. In reality, it never loved the landscape or architecture. Real life is like that.
Resurfacing the wall was my first choice. The budget demanded - stick with paint. Okay. But no more blue. The color would need to relate organically with the blues and grays of home and roof, but blue failed in application. Move on.

The inspiration came from my favorite gardens.  Their common denominator are broad backdrops of green. For your enjoyment,  pictures taken of the Portland Rose Garden have been dropped in this post.

The formerly blue retaining spent a week striped in 5 shades of green until 'Weatherfield Moss' got the unanimous nod. Two gallons coated the impression of a hedge across the wall.

Santa Barbara based landscape designer and garden coach Joan Bolton sent the name of the plant I had tooooo lazy to look up in last post.  My Pectranthus is a living souvenir of my trek to the Botanical Garden at UC Berkeley . Southwest Airlines doesn't charge for luggage- she came home in an extra suitcase. Yes, we gardeners are a curious lot.

What I love about her is she looks so dainty. So well decked out in velvety leaves trimmed in white with floral spires impossibly saturated in purest blue.  So delicate appearing, her looks are at odds with her iron constitution. Here, she thrives  in a pot in full sun. She cools the roots of her companion roses, protecting it both from the vagaries of weather and also the irregular care of the gardener.

By law, wood roofs are no longer allowed in Southern California. Fire hazard. When it came time to replace the overhead  kindling, we chose cement tile grooved to mimic the grain of wood, in the deepest gray we could find.  For added shadow line, tiles are offset.

No material is without its drawbacks. A cement roof requires maintenance. Because it cracks. Particularly if it is walked on. Like after exterior painting, washing skylights or exterior painting. Even a good strong wind can take tiles off.
If, like us, you choose it for its many attributes, then you need to find a good roofer. Someone honest, craftsman-like and reasonably priced. Someone like Matt Walker.
The featured rose garden is the International Rose Test Garden -
Washington Park, 400 SW Kingston Ave, Portland, Oregon.
(Images taken at the 2008 GWA (Garden Writer's) Symposium)
Matt Walker can be reached at 714.525.2284

Email ThisBlogThis!Share to TwitterShare to FacebookShare to Pinterest
Labels: beauty in the garden, Garden Hints, lessons from the garden

Again, your new camera worked to perfection! Always fun to get the 'worker bees' in photos! xo

Those blooms from the Portland Rose Garden are adorable. Also getting into Plectranthus too..you're is sweet. Matti

First off, yes, La Vie en Rose is closing this week (the 28th, I think) and my friend had a gift certificate to use up! So we did.

Secondly, I know what you mean abut those fragile concrete tiles. Seems like an oxymoron, doesn't it? My parents were particularly concerned for their roof during their recent tenting.

Hope your husband continues to recover and regain strength and stamina.

Your Weatherfield Moss looks fantastic! And what a great name!

You didn't say what color your painted the cedar arch. But it's the perfect complement.

Glad to hear that you and yours are up and around.

Your garden is looking beautiful! And your right- finding the right person for a job is important. We had some work done on our roof after a hail storm and they came out a few weeks later to check on us and see how their work was holding up. I was impressed.

Thank you ALL for writing in.

Sue- "Action" shots were the biggest reason for going back to SLR. I missed taking action shots.

Nikki- All the prayers for my husband are paying off.Thank you for being one of the people who sent them.

Joan- My design notebook with the archway color is out in the car. Will look it up and post soon.

It was excited to come across your site a short while ago. I arrived here today hoping to learn interesting things. I was not upset. Your well thought out ideas with new strategies on this subject matter were enlightening and a great help to me. Thank you for making time to create these things and for sharing your mind.

Welcome aboard anonymous. Your comments got my day off to a GREAT start this morning.