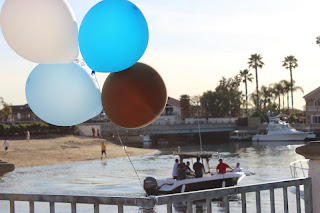 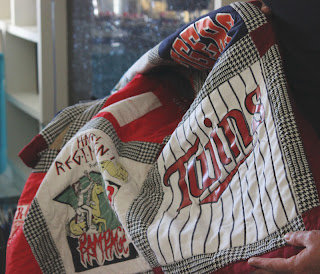 What a great and original gift! And so beautifully rendered. A History that is handed down and also serves as a truly warm, loving, cozy wrap around---cause that's what a quilt really does, doesn't it? Wraps a little one in 'love'....!
Perfect!

What a great quilt! I love it. I admire people with talent and patience to sew. Looks like a perfect day in So Cal. I am envious. Well, for a minute or two. HUGS...

WOW! What a wonderful idea! Beautiful quilt! The best I could do was to sew a baby blanket with appliques on it when I was expecting John III. Wouldn't have the patience for quilting.
Lovely and glad a good time was had by all!

Thank you for starting my day off with such nice comments!

This is the best gift of all - a Memory Blog. Thank you, Lydia!

It was so much fun having family and friends to celebrate the upcoming birth of baby Joseph ... AND my 60th birthday!

What a fantastic way to bring the past into the present and into the future. I love quilts that are conversation starters :-)