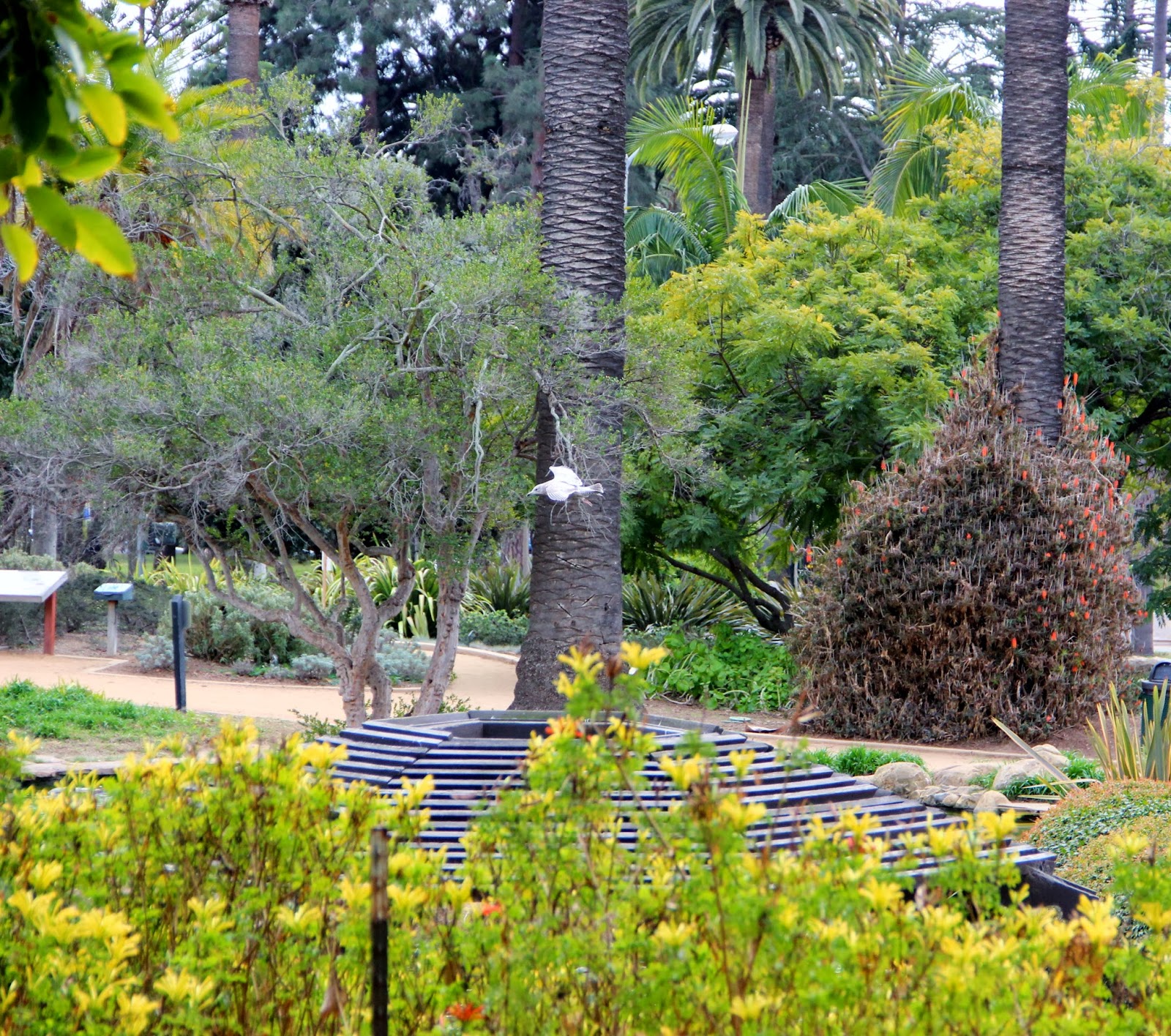 In 2012, the 1 million-plus readers of Birds and Blooms voted the 1976 rock anthem by Steve Miller the best song about birds. Ever.

Okay. So the bird my lens followed was a seagull instead of an eagle. It was still on a mission. The same as we. To get fed before moving on. Overhead, the clouds pregnant with life-giving rain were about ready to sweetly drench the earth~ but if we didn't hurry, also soak the gourmet sandwiches and salads. 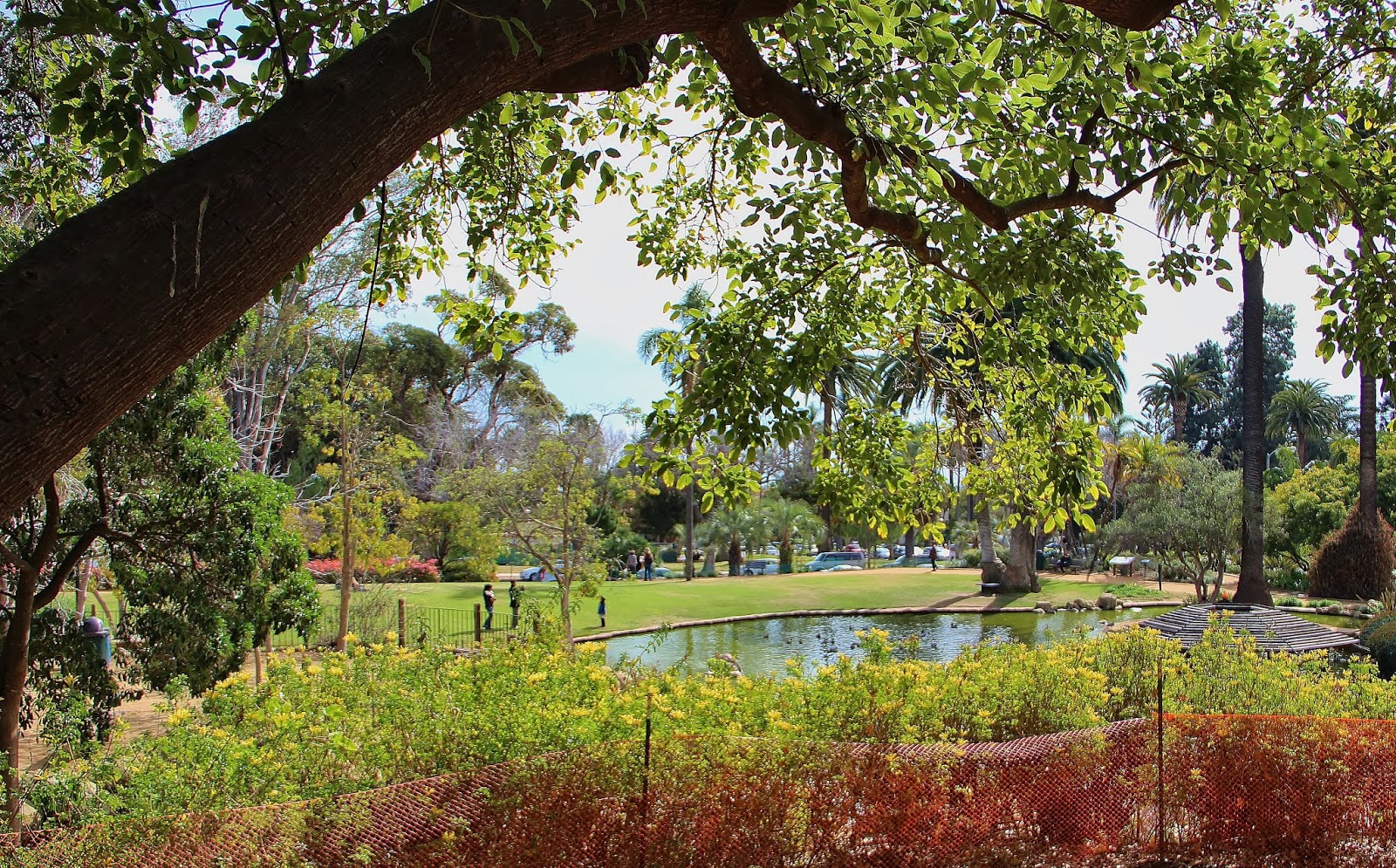 At Billy Goodnick's suggestion, we gathered at the stone wall at the top of the Erythrina mound, overlooking the pond. 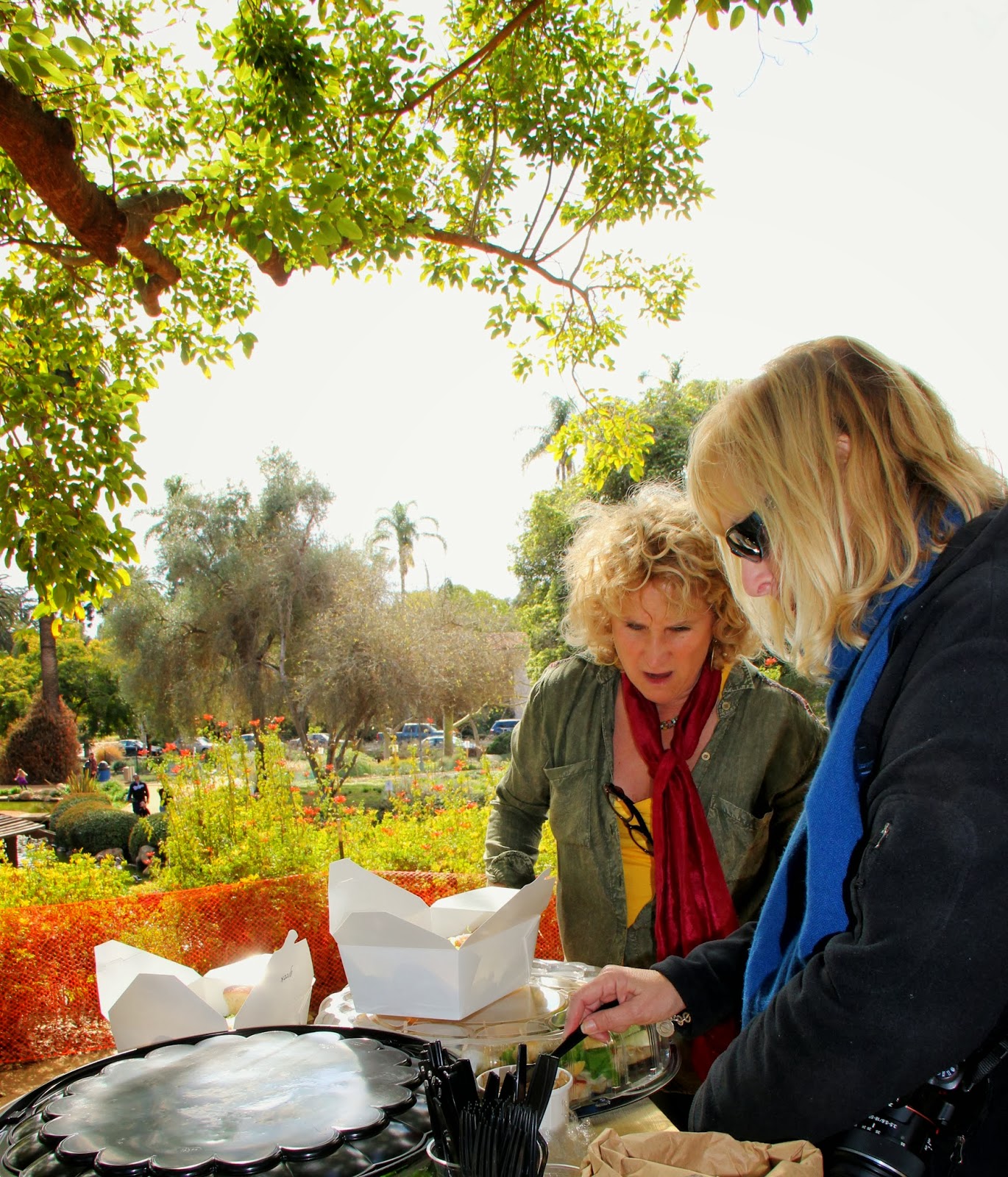 We had 2 more stops: soon there would be raindrops dancing on our heads.  Nan Sterman and helpers quickly laid out the casual gourmet spread  from nearby Panino.

It was rather humbling to realize that two guests flew from the farthest side of this continent to join us. Former American Horticulture Society President Arabella Dane and her husband, Nat- what a treat to our tour garnered that level of interest. 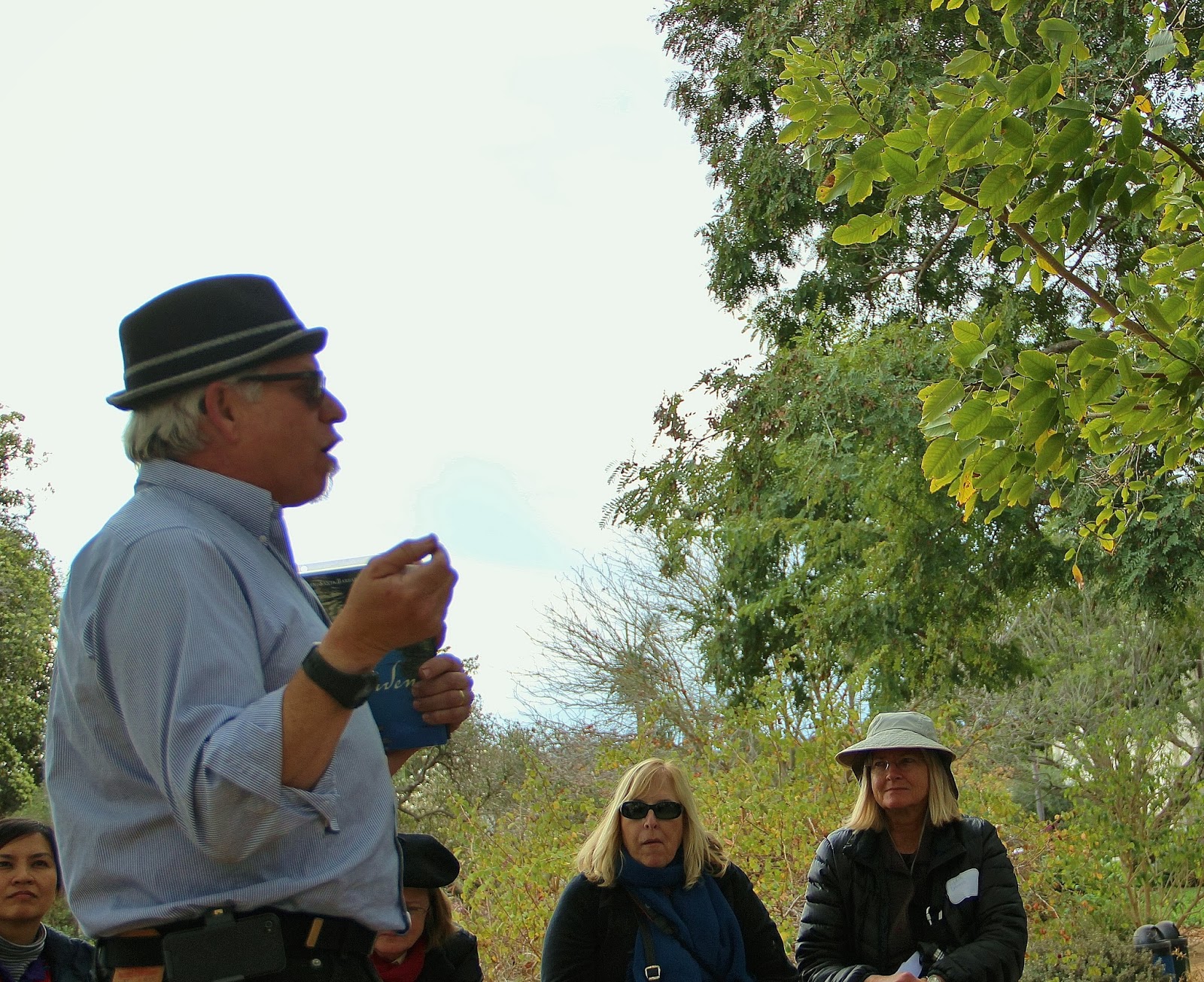 Billy poured the history of this place into our minds.

Filling a full city block, it once served as the grand estate of Albert Herter's mother. Surrounded by gardens, her mansion was a repository of artwork of his, including lamps designed for Tiffany, artwork by his wife Adele McGinnis, and furniture designed by Herter Brothers, a major New York design firm, also a family enterprise.

After the  matriarch died, Albert Herter evolved into a hotelier, remodeling the home, adding bungalows and reopening the property as the El Mirasol Hotel. Until it was damaged by  twin fires in the mid- 1960's, the hotel was a long-favored spot to vacation at by those who expected the finest accommodations. 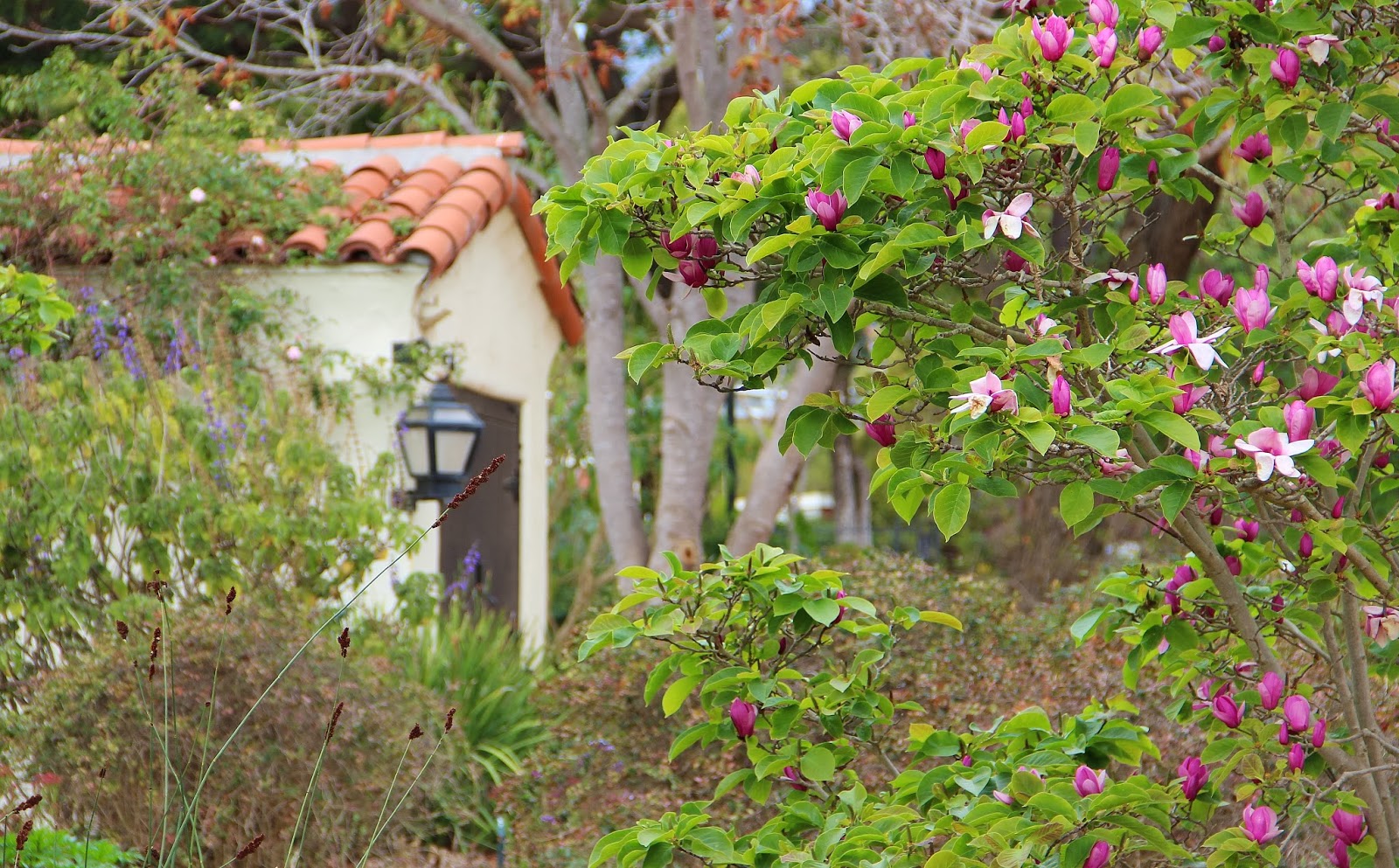 It's heyday as a hotel past,  there were attempts to revolutionize the property's character with high-rise development. However, the local citizens prevailed in creating property's highest and best use not in commercial usage- but as a place of where plants are largely the guardians of public  peace and serenity .

During her lifetime, Alice Keck Park, daughter of oilman and philanthropist W.M Keck, never took credit for providing the funds to purchase the property for public preservation. Not until after her death was the benefactor's name disclosed.

How Alice's name was incorporated in honorarium took some consideration. Alice Keck Park Park - how words sound together is important. 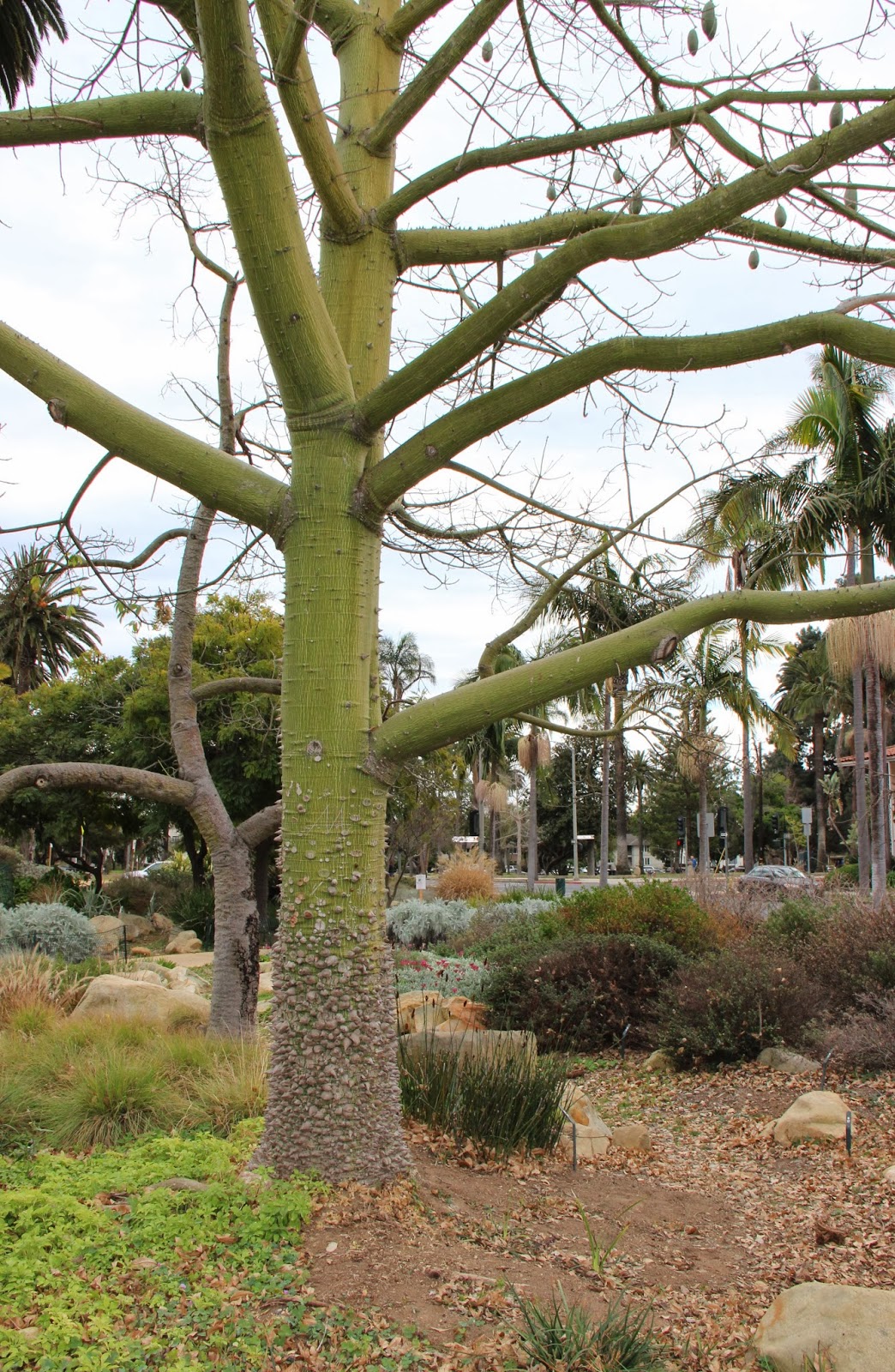 Alice Keck Park Memorial Gardens. Time slipped away from the days where on this spot stood a fine family home. Slipped past the days as a hotel. Slipped to where the influence of this place is even greater now, when trees  surpass architecture in prominence.

Such is life. Dreams change. What you didn't even imagine possible when you began your journey through time may not be your greatest accomplishment.

This is quite a fantastic place. Thank you for sharing about it,Lydia

T'was a lovely day. Wish I'd been able to stay around for the full tour. Great to see you, too.

Wish I'd been able to hang for the full tour. But it was great getting to show you our little slice of heaven.

Ahhh, wasn't it a wonderful adventure filled with great friends? I loved every minute of the day and truly loved spending time with you two (and of course Nan, Billy and others).

I think these gatherings are not only informational, but also glue us together as a group of professionals and friends. Loved it all.