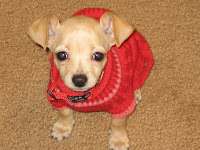 Heaven goes by favor. If it went by merit, you would stay out and your dog would go in.
-- Mark Twain
I first met Karen Bel when her last name was Gould. I was 15 and we were candystripers at Whittier Hospital. When I got a job pushing pancakes at Sambos to earn money for college: it became my duty to stuff the place with my friends. Karen followed me.
Karen got married, moved away to Washington. Lost track of each other for a few years. But she found me through my son's contact information at CSUF. It is so reassuring for all the changes, Karen still has a passion for pets. This is the email she sent this morning. 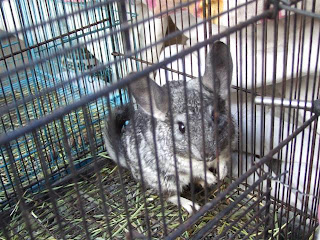 I now have 26 Chinchillas in the house! I rescued 24 of them from some dumb woman who is an animal hoarder and got evicted. She started with 2 she adopted for free from a Petco years ago and let them breed and inbreed until she had 37 of them. That doesn't take into account the ones that died. She also had massive breeding cats plus reptiles all over and huge aquariums. The smell inside was horrendous! 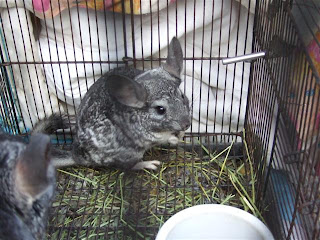 When we picked them up they were filthy and the cages hadn't been cleaned for a long time. They're malnourished and very dirty. She hadn't dust bathed them for months and was feeding them sunflower seeds. Some of the females have to be pregnant. Some lost their fur or part of it. Others are matted right to the skin. They've all had dust baths now and tonight I got 3 of them bathed with shampoo and trimmed down to get rid of the matting. They're eating like starving children.
A chinchilla supplier we've shopped with is donating 25 pounds of food and dust for bathing. I contacted a rabbit rescue who started to include Chins and Guinea Pigs and they're loaning me clean cages and giving me food, dust, chews, treats and toys for them. Several have eye infections and they're bringing me medication for them. 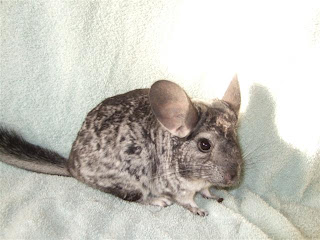 The lady is going to come by to do health assessments on them for me and she's going to advertise and have a fund raiser to pay for everything. A bunch of them will go to foster homes with the rescue until they're ready to adopt out. She'll also have the males neutered before they go to homes. They'll take care of the screening and adoptions, too. I need to come up with names to put with their pictures for a mass e-mail they'll send out to get people interested.


I'm thinking about hanging on to a few females in hopes of having babies to raise again. I'd love to hand raise them like I did with Mr. Pibb. Maybe I can make a deal with the rescue to raise the babies when they're born.

I did adopt a female Chin from work last weekend. She's the most beautiful one I've ever seen and she will sit in my lap all evening without pooping on me! She's champagne color with pink eyes. I call her Bunny. I should keep one of the rescue males for her so she's not alone.

Thank you for sharing, Karen!
Posted by Lydia at 7:03 PM

I really appreciate you sharing our story!

Tonight I got 3 more little ones bathed. They're so tired afterwards they fall asleep in my arms. I've decided to keep 2 of them as friends for my own 2 sweethearts. My sister in New Mexico has been looking for a friend for her baby and will be taking one, also.
Anyone interested in adding one or two to their family can contact me through Lydia.

BTW, I worked with Lydia's dear, sweet mom first. She had her hands full when we were running around watering flowers for the young guys in Whittier Hospital! ;)
Ahhh, fun times....