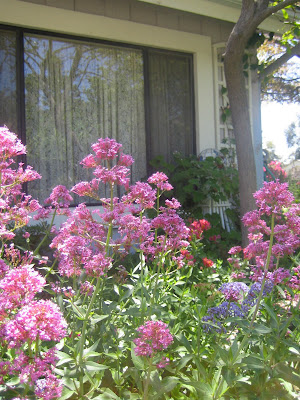 The first time I saw 'red' Valerian- it was blooming in wild drifts near the freeway south of Santa Barbara. We stopped at a nursery. The car was already full. But Gerry piled a couple gallon plants on my lap for the ride home. It spreads through the sunnier parts of the garden on a whim. But nothing that looks this happy should be labeled invasive. 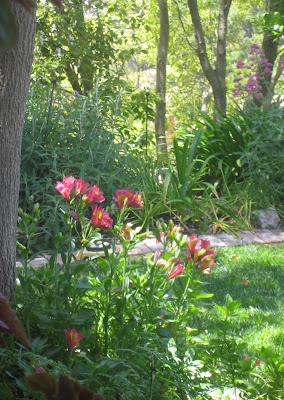 Looking south through the same flower bed. the alstromeria mimics azalea blooms. The neighbor's tree blocks the harshest sunlight and leaves the impression that we are not in the suburbs, but in the wooded countryside. 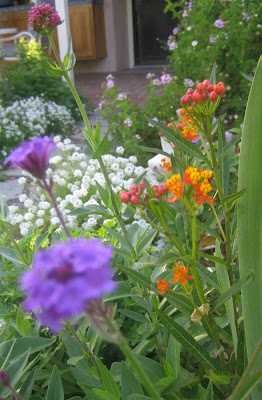 "Cheerful" is the effect of mixed floral borders. There is no no shortage of bees, butterflies or hummingbirds when the garden looks like this. 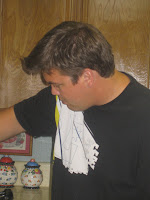 This is our "Little Ken". He's 6'-3". It was his idea to get the family together here for Mother's Day. He volunteered to cook for the family.
He brought his chihuahuas and the makings of mimosas for his momma. 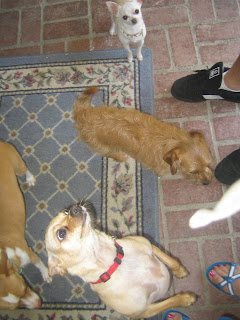 With his two dogs, and ours, we had a herd of chihuahuas to entertain us. This is as close to getting all the compadres in one shot as I could. That little white one- 'Quila' is a real Beverly Hills chihuahua with a better wardrobe than mine. 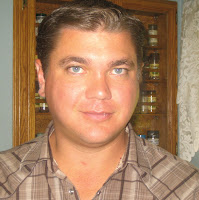 After church, our older son, Trevor, escorted my husband's mother from Corona to be with us.

Without my husband and the boys, there would be no Mother's Day for me. So they each got a present. Barbecue aprons which read, "Does Someone Smell Something Burning?"

This is my dear mother-in-law, Melva. She is gluten-intolerant, so the menu is built around her needs. Not that anyone suffered at all. 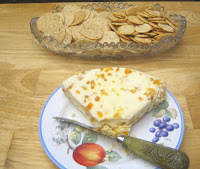 Stilton Cheese with Apricots from Trader Joe's was devoured along with with Blue Diamond Almond Nut Thins. 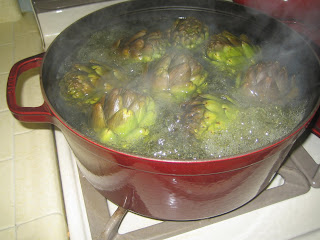 Kenny boiled the artichokes until just before done, then marinated them for an hour before
finishing on the grill.
He precooked the russet potatoes in the microwave and let them cool while he chopped sweet onion, carrots and red bell pepper for the hash browns. He cooked the diced vegetables in garlic- salted olive oil until they were just beginning to caramelize. Then the grated potatoes were turned in the giant frying pan until a crust developed. Chopped parsley from the garden was sprinkled over, and the heat turned off. 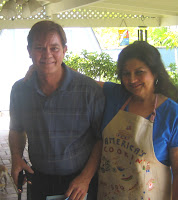 Gerry was in charge of the barbecuing the meaty Korean ribs from the butcher at our local Market World . Most of the ribs were marinated in the traditional Korean sauce, but for my mother-in-law, a few strips of the cross-cut ribs were simply tenderized in garlic salt, pepper and Merlot.

I am modeling my Mother's Day Outfit- a dress I bought for $19.99 at Kmart, topped with the most adorable "American Cooking "Apron. 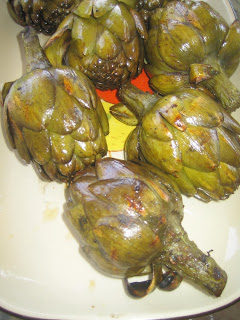 We gave our Thanks to God on the Patio for the wonderful food and time together. We asked He be with those who were in our hearts but could not be with us that day. 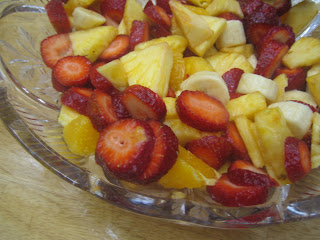 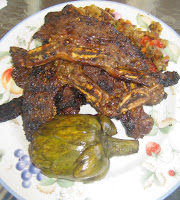 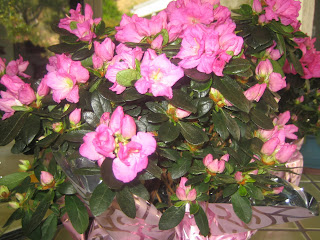 At the end of the meal, Melva was presented with one of the azaleas that decorated the patio. The other was hand delivered to my mother.
There was still one thing to do. Drive to Sears to replace the table saw which is no longer safe. A woman came by and asked, "Isn't your husband taking you to the jewelry department? " I told her that if he was buying me jewelry (which I rarely wear) I should probably wonder what he had done that I would need the "jewelry mea culpa". No- he makes me many fine things with his woodworking equipment. The saw is two gifts in one, really. One- for his birthday he is getting exactly what he wants. Two- the presents he makes mean more to me than anything which is born at a mall.
And that is the story of my perfect Mother's Day.
Posted by Lydia at 11:16 PM

Oh Lydia,
GORGEOUS!!! Your flowers are to die for! Look like pictures in a magazine! Beautiful! Wanna come plant some for me? We have few flowers because they require so much care. Just mostly greenery around here.
Here I thought Kenny was making brunch for you and it turned out to be a full course dinner! YUMMY! I have never ever seen so many artichokes cooking at a time! Oh they looked wonderful! I would love to try them that way! Your Mother's Day looked perfect! Your boys sure look like their mother!
Thanks for sharing such a beautiful day with us all!
XO Trisha

Your special day WAS perfect! Handsome sons you have. What a wonderful meal. I'm drooling. How fortunate your mother-in-law has you for a daughter-in-law! Thanks for sharing the food and fun and your garden.
xo Oregon Sue

Lydia: Thank you so for stopping by my blog. My goodness, your yard looks beautiful. I love flowers and gardening. And that bar-b-que. You had my mouth watering. We love artichokes!

Lydia - Unbelievable. You know I'm gluten/wheat intolerant. Where was I during this spectacular meal. How much more gorgeous could those boys be. I thoroughly loved, admired and coveted you fabulous garden. I truly want to come see it one day. The way you wrote about the meal and the garden made me drool.