Hanging with Julie and Julia

There is no escaping the ghost of Julia Child. Standing 6'2" in her prime, she was a giant in her time. Now that she is gone, a bitingly irreverent Julie Powell spawned a blog which begat a book that turned into a movie where the Legend Of Julia Child looms large. 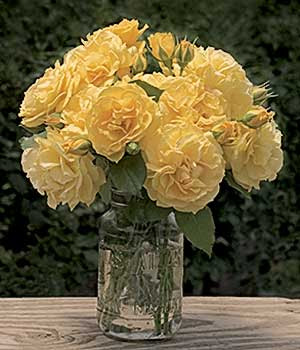 Yesterday, I trudged in from three hours of battling renegade blackberries and pepper tree sprouts trying to take the hill behind the herb path. Too tired to face going up the stairs to for a shower, I switched on the TV- KOCE re-runs of Julia.

This is what Reality TV should be: enthralling and energizing . From the tiny specs I've spied- what passes today for Reality TV- is about as real as Silicone breast implants. As satisfying as processed potato-bit chips pressed with artificial flavoring pressed into a can . With Julia- crepes weren't always perfect- on camera- they got dumped in the trash. Quips, like vegetarians for dinner was not to be an expose on cannibalism- leavened things up.

Hot water and a lathered loofah set me free from the cocoon of dirt and I fluttered to experiment in the kitchen. 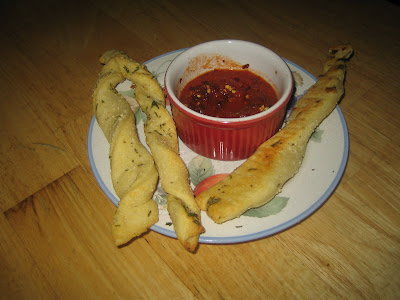 Thumbing through the July 2009 Gourmet magazine inspired what to do with a leftover lump of dough from last night's pizza. EVOO was slathered over the egg shaped dough, then rolled to the thickness of a deck of cards. Herb leaves pulled from their stems- parsley, thyme and rosemary- which were madly rolled over and over with the pizza wheel into bits of fragrant bits of green. Into a dry froth of freshly grated Parmegiano Reggiano cheese sprinkled gray sea salt and smashed garlic clove, the topping was tossed together to in turn be tossed onto the waiting slab of dough.

The pizza wheel easily created tape-ruled width ribbons of the dough. These were twisted and allowed to rest on a parchment covered baking sheet while the oven heated to 400 F. Twenty minutes later the fresh bread sticks were GOOD- but when they were cool and crisp- they were even better dipped in Marinara sauce spiked with hot chili pepper flakes. 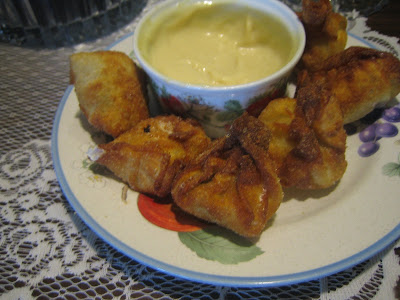 Earlier in the week I hadn't the heart to toss a true rarity- leftover artichoke. Originally braised in EVOO with Meyer lemons, the pairing disappointed my husband's palate. What to do?
The hearts were stripped of their leaves and cut up with equal chunklettes of fresh Mozzarella then bundled into won ton wrappings. Fried in bubbling hot peanut oil for two minutes, a creamy champagne mustard/ mayonnaise dip, they turned out to be as inspiring as they were inspired.

Which is how life should be lived.


Thank you to Tom Carruth for creating the 2006 AARS winner- Julia Child Rose- for Weeks roses- and to Gene Sasse for photographing the lovely bouquet of buttery namesake blossoms at their best- and for permission to use. I wish we lived closer so the food images would be as spectacular.

What grand looking pizza! I purchased a book on 'how to barbecue pizza'. When the weather is cooler I'm going to give it a go. Thanks for the inspiration. Sorry if I drooled on the page!
xo
Oregon Sue

Interesting, I did read that Julie had written a very off-color book re Julia. It was her language. An over use of the 'f' word. There really is no place for vulgarity in any story. Makes the author sound 'small' and ignorant.

Now you have inspired me again with your reruns of the pizza dough. Great ideas. Scrumptious looking creations.

As for living life inspired... I have picked a number of people to be friends, as they do that to me. Some more inspiring than others and some even in an inspirational way that I don't want to live! Did I say that right? What I mean is that some people are obsessive compulsive or totally lazy and that inspires me to be conservative and not over the top in any direction.

Hugs. Thanks for this.
xo
Oregon Sue

Hello Oregon Sue! You will love the pizza.
So far, the parts about Julia in the Julie Powell book are not off-color. About her own life- she could use less salty language and the recipe would have been better.
There was also some bitterness with her open disdain of Republicans that holds me back from enjoying the book as much as I could have otherwise. It is holding me back from seeing the movie.

Ohhhhh Drat!! Let's try this again! Don't know what happened but as I finished writing a lovely comment, I got kicked offline and lost it! grrrrrr

I can't remember all I said but I said that you and Sue definitely have been blessed with culinary imgination and creativity.
When God passed that out I must have been in the restroom! :(:( Thankfully John is a meat and tater man with some casseroles thrown in. Lucky for me he LOVES to go out to eat!

I am eager to see the Julia/Julie movie and thanks for the heads up about the anti-Repoublican comments! That's good to know ahead of time so I don't throw anything at the theater screen and get tossed out! :):)

Loved yours and Gene's pics as always!
I had more written but with my senior brain can't think of what it was!
Oh yes! I said I love being able to see the comments below the posts!
Great job!
Hugs, Trisha

Don't let the book hold you back from the movie. The movie is wonderful. There is only one negative "Republican" comment and the language is G.
xo
Oregon Sue

Oh, why do I torture myself? It seems I always inadvertently read your blog when I'm famished. Again, now, there are photos and vivid descriptions of yummy things so this will be concise for me as I'm going to head for the kitchen upon completion!

Yes, by all means, as Sue from Oregon says, go see the movie Julie and Julia. I hadn't read the book, but from what you say, I rejoice that I haven't.

The movie has a somewhat mildly bitter taste of generational distance of Julie from Julia by virtue of her less than demure language and the spousal trials shown of Julie and her husband. I wondered that perhaps that language in Julie's blog somehow had been conveyed to Julia. Made me wonder about Julia's reaction to learning of Julie's enterprise, hence the decision Julia made. Oh, I hope I've been just opaque enough not to spoil the movie for you.

I agree about the one very blatant anti-Republican remark that Sue spoke of, but I also noticed one or two more snide remarks that I also thought tacky, unnecessary yet
so typical of the Hollywood left.

Oh well, now on to the kitchen for what little delicasy though --- I don't know, as yet.