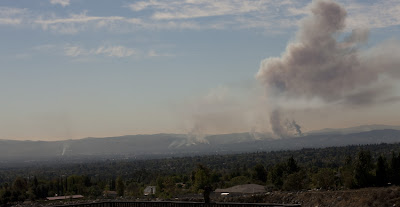 It is a crisp, clear southern California morning. I left to cast my vote at the library. When I went back to my car to check my list of errands- there was smoke slightly to the northeast of the center of town.


The top photo, taken by Gene Sasse in Alta Loma, shows the multiple ignition points on the fires along the 60/ 57 freeway interchange. The widest plume appears to be what is in my images. 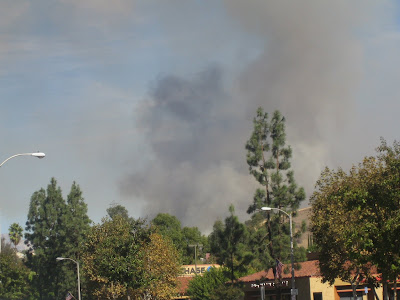 The flames are on the other side of the ridge- but the smoke smells like danger. 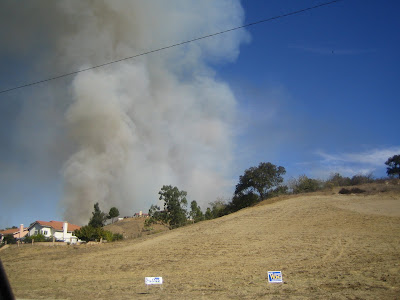 Before Diamond Bar became a city, brush clearance was not rigorously enforced. On a windy afternoon way back then, in less than an hour, a half dozen homes in my neighborhood were reduced to charcoal and ash. 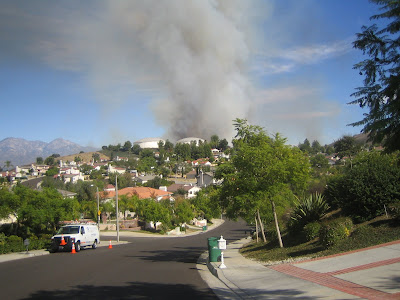 Let's pray this time we are spared the worst of fire's fury.
Posted by Lydia at 12:57 PM

I thought of you this morning when I saw this on the News....I hope your home won't be threatened, my dear...! These things are certainly scary--That's for sure!

Thank you. We were very fortunate that the air was still. The fire was under control long before traffic was normalized.
We will have to be careful with wildlife movement- every time fire suddenly moves the native habitat- the predators like to visit up close and personal.

Glad to hear all is well. Any idea as to the cause? Arson?

Oregon Sue- I believe an overheating catalytic converter was causing flammable materials in back of pick up truck to catch fire- driver unaware of flaming debris coming out back of truck.