Requiem for the Space Shuttle ~


"Wherever you go, go with all your heart." 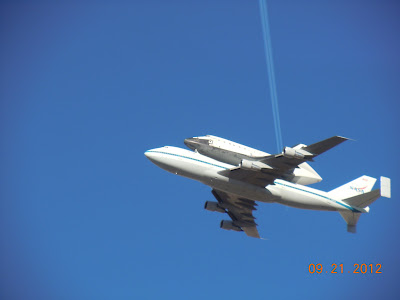 Tthe last flight of the Space Shuttle Endeavor  deserved all the pomp and circumstance of a State Funeral.

My respects come not with my presence at its landing, but in reprinting words that were brought to life in one of my first assignments as a professional writer. It was the summer of 1995.

A few years prior, writing a program to track vital signs for a doctor at the City of Hope, my husband purchased one of the first 100 Apple II e's off the line, promising me "It is all I'll ever need."

It was until his wife learned to type...Excerpted from an article Real Tool of  Politics is Vision.

"When President Kennedy set the goal of reaching the moon in less tan a decade, he unleashed the power of the entire nation. It was a call to action. It created sciences and jobs that did not exist before. It caused scientific  advances because of the inherent need to conserve space, save energy and support human life.

Without the primary goal of putting an American on the moon, the quality of our lives would be very different. There would be no freeze dried foods, solar cell calculators or microprocessors."

The first person article became personal with outlining how we owed our oldest son's life, which officially started 2 months before he was expected, not just to God and fine medical care, but to the life-monitoring and support technology the space scientists developed.

Full disclosure: my husband worked on the Space Shuttle atmospheric analysis system. In our home, the demise of the miracle of the United States Space Program is felt like the loss of a monumental figure.

The LASER. That alone.

Too bad Neil Armstrong didn't commodify himself. But engineers aren't that type. Think of what the King family has done to commodify their Martin Luther King. The political power. The politics of NASA would have been so different now.

Lasers. The first use of lasers in construction was to build the space shuttle.

Lydia,
I am always amazed when I come across a list of our everyday appliances, etc. that wre invented because of the space program.
I too worked for the space program as a secretary. Even starred in a video for North American Aviation, Tulsa, riding the Polarity Checker that our company built for them. :) The NA-T inspectors asked me to sit on it for the film while they put it thru it's paces. (Pitching and yawing) and I readily agreed. The president of our company was so sweet and told me that I really didn't have to do it if I didn't want to! Are you kidding me? I was a model before I married so it was right up my alley! :)
Yes it was a sad day for the program but at least we here in So. Cal were the recepients of history yesterday.

Hi Trisha! You are still beautiful enough to model):-

We've owned so many computers now. It's been a long time since when I saved up enough for a nice dining table and chairs it became funds to barely purchase a calculator. One which had to be plugged in to work):-

For a moment there, I thought you still had that Apple IIe in your possession! I used one in my high school newspaper class. Wish I could've seen the shuttle as it jetted through the southland.

LOL Nikki. Although Gerry nearly fainted when he found out how much an Apple IIe sold at auction.If we hadn't given it away,we would certainly sell it now!