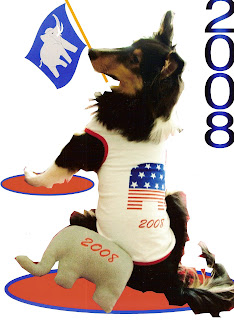 Ask a man which way he is going to vote, and he will probably tell you. Ask him, however, why, and vagueness is all.
- Andrew Lack

Today is election day in California. The news is focusing on the turnout. We will have turned a good corner when the focus is on the quality of thought behind the turnout.

I cannot speak what motivates other people to vote. I can only speak for myself. Voting is my expression of hope for the future of this nation. Voting is a voluntary way of remembering to thank the generations of service men and women who have served this nation. Voting honors especially those who made the ultimate sacrifice- If we have done our homework.

I believe that our individual votes makes a collective difference.

Voting neither stops nor starts on election day. It starts way ahead of time, seeking clues beyond the sales brochures distributed as political mailers and voting guides. And it doesn't end when the results are in. Your vote ends when you are able to see the consequences. If you vote with that seriousness, then the likelihood is that every vote you cast in your lifetime will be better informed.

I don't don't punch every bubble. I only vote if I believe I understand the likely consequences.

In voting I play the odds, assume it is a risk, to be made as reasonable as possible.

I believe it is in the public good for citizens of this nation to have preferential treatment for services the government provides.


I believe the most important unit of society is the traditional family.

This state, California, is in real financial trouble. Good intentions are getting in the way of being able to invest in infrastructure. Not just in transportation, but in water.

I believe people who disagree with my political philosophy deserve respect. So in looking at candidates and issues, I really look for the non-quantifiable quality of being able to have productive conversations with people about positions on which there is controversy.

Thank you to Gloria Whitley of Washington State for the use of the darling picture of her 8 month old Sheltie 'Jackie'.
Posted by Lydia at 9:12 AM

Email ThisBlogThis!Share to TwitterShare to FacebookShare to Pinterest
Labels: Remembrances, Thank you, volunteer

Weclome aboard Dinesh! You may want to go forward to July 13 "On the Importance of Travel". My daughter-in-law has enjoyed combining her love of travel with volunteering since she was in junior high.