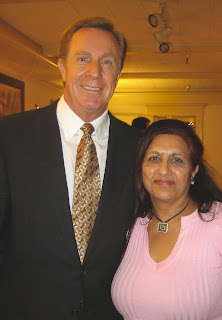 Once upon a time, after a candidate's forum for City Council in the Diamond Bar Library Community Room, Gary Miller mentioned,

"Lydia, I don't know if you know this, but we have mutual friends and they say you don't like me very much."
In the two decades since, I learned not just to like Gary Miller; I learned to respect and admire him.
I'm not quite sure when he crossed the threshold from smart to wise- but time and common sense forged him into the right man at the right time on an important issue. 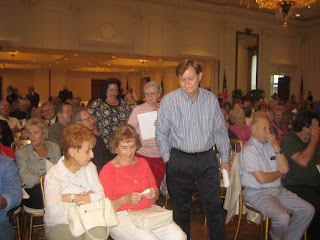 Where TV and Radio blasted feelings meant to frighten the audience regarding "Obamacare"- Congressman Miller sent some simple advice in his constituent newsletter- ask your doctor what it will mean to your family if the bill is implemented.

The Health Care Forum he hosted last night at the Nixon Library was truly impressive. In two weeks, his staff was able to secure comfortable accommodations for the first 700 people to request information or to express concern regarding HR 3200. Those on the waiting list were advised. 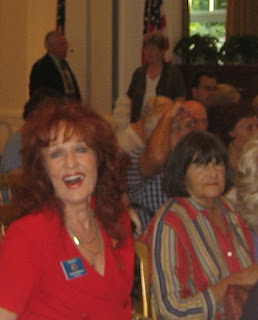 Information was ample and organized. The actual bill- where else to find it- and a 5 page fully annotated synopsis of concerns was available. Two doctors advised the audience of what the bill if implemented as written would mean to their most special interest group- their patients. They expressed the belief that it would be a great injustice.

Questions were turned over to the audience by way of a lottery. The intensity of belief of both those in favor or and against H.R 3200 America's Affordable Health Choices Act of 2009 made for healthy debate.

Not everyone left happy. Some people require submission to their position to understand that they have been given a fair hearing. What I require is respect and thoughtful deliberation before coming to a conclusion which makes common sense. 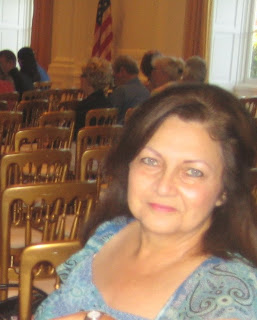 The problem with H.R. 3200 is that it is not common sense that the client base can be expanded and costs controlled without both foregoing medical breakthroughs and access to these. It is so complicated, that people who have difficulty working their way through the current system- it is wishful thinking to think this will open up choices to them.

H.R. 3200 is not accurately named. It is not affordable. It will not expand choice nearly so much as it takes this away. In the rush to Utopia- the simple issues which should be addressed-under-served communities, pre-existing condition exclusions and where we have vast agreement- the solutions to those will be lost in the chaos H.R.3200 will create if enacted.
All photos are from my personal files.
Top is Congressman Gary Miller with Shahina
Second photo- my husband, Gerry is walking
Third- Cropped from larger shot- Trisha and Edda in crowded room
Last- Me- Because Trisha would pester me if I didn't put one in of myself.
Posted by Lydia at 8:55 PM