Jury duty is not what is easy. It is what is right. Looking for quotes concerning what I have been called to do today, from what I found it may be the most unappreciated right of modern life because we do not fear loosing it.
Looking for quotes to fine tune my attitude before I sign in to serve at the courtroom, these are a few gems among the costume jewelry strewn across the Internet.


I consider trial by jury as the only anchor yet imagined by man by which a government can be held to the principles of its constitution."
Thomas Jefferson
Author of the Declaration of Independence and third U. S. President

Laws: We know what they are, and what they are worth! They are spider webs for the rich and mighty, steel chains for the poor and weak, fishing nets in the hands of the government. ~Pierre Joseph Proudhon, French politician and journalist, died 1865

Punishment is now unfashionable... because it creates moral distinctions among men, which, to the democratic mind, are odious. We prefer a meaningless collective guilt to a meaningful individual responsibility. ~Thomas Szasz" Hungarian Psychiatrist who has written on merits of abolishing insanity defense.

Somebody recently figured out that we have 35 million laws to enforce the Ten Commandments. ~Earl Wilson Three term Governor of California and 14th Chief of United States Supreme Court 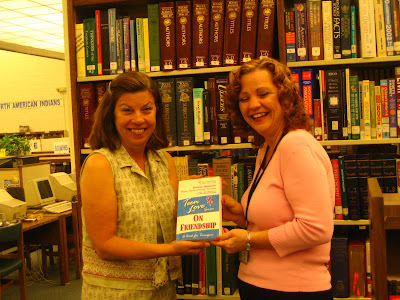 On the left is Nancy Lyons with the gal who was then the new children's librarian in Diamond Bar. Nancy is running for reelection for the Walnut Valley Unified School District. I first met her when we were about eight, so I guess I can give a historical view of her character. Nancy studies hard, always has her priorities straight and is always prepared for whatever comes. Yep, she is a better woman than I. If you live in the district- the private Nancy is as reliable and honest and devoted as they come. I highly recommend voting for her

A true sign of a novice to public responsibility is revealed when a perfectly decent, hardworking and accomplished individual runs for public office and is embarrassed by the public unveiling of a lack of voting record or registration. To those who seek office- understand what we vote is private- that we vote and our inclination to do so is public record.

This kind of revelation is standard at the local level. It is rare at the level of gubernatorial candidates. Meg Whitman's candidacy is tarnished in the eyes of people who have appreciated the right to vote with more care than she did when she was working towards her first billion. No way around it. This may not be fair, but most people want to cast their vote for someone who demonstrably cares about the actual act of voting as they do. By not voting most of her adult life, that disqualifies her in the eyes of a hefty segment of the population.

I am not the only one. Guess my friend Trisha Bowler had a conversation with the LA Times Reporter, Cathleen Decker. To read what she had to say, go to

first break at jury duty, I will.