From Pyramids to Super Bowl

It was another lifetime. Bazaars, Camels and Pyramids. Staying in a palaces converted into hotels. 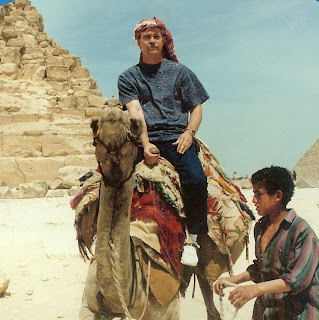 It was a time I was confident would continue past when our son's were grown and gone. When I would be free to explore without worry that turning the key upon our return would find evidence our home  had served gig as party central in our absence.  That is how Egypt became just one on a very long list of countries my husband has visited that I have not.

Gerry was entranced by the stark differences of the United States and Egypt. Still, travelers miss the tastes of home. Cans of Campbell soups were FedEx ed for emotional equilibrium. Condensed soup helped ease his homesick state. But we Californians feel deprived without fresh produce.

Over a decade later, it is  the kindness of the wife of a local colleague which stands out.  I do not know her name. Just that she went to the trouble to find Gerry fresh tomatoes and green onions safe of local pathogens for Americans to eat. Thank you.

Previously, her husband's business interests called them both to the United States for several months. She explained the cultural divides that would have made my stay less comfortable had I been alone there while Gerry worked. I would have been alone poking about in a country where the vernacular shorthand to describe American women was that we are all like "Madonna".  This was during the wild child stage of  Madonna Louise Veronica Ciccone's life.


=====
It was just a local flight away from our home here that my husband may have been greatest danger in the workplace. Feb 16, 1988 I called Gerry's secretary, Lolly Schienle, to see if his arrival home was firm for that night or the next. She suggested I take the boys out to dinner. I should have a glass of wine. Gerry would be delayed.

Fat and happy from our meal at The Whole Enchilada, Gerry calls. During a meeting at TRW subsidiary Electromagnetic Systems Laboratory, he notices out the window SWAT officers with mirrors on the ends of their guns running about. The door on the conference room slams shut. They are told to  hold still. A rejected suitor entered the lobby.  In the building, seven people were murdered.