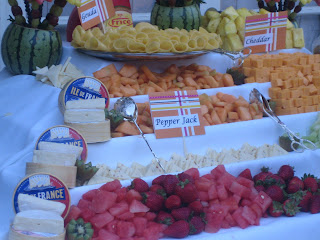 In Colonial America, festive celebrations were feasts. The abundant food of the New World was laid out on temporary serving tables made by placing boards across wooden construction horses. It was on a trip to Williamsburg that I learned of groaning boards. 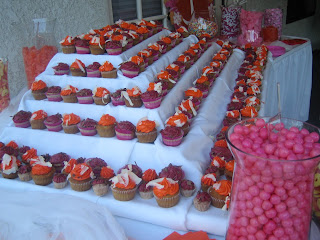 The pursuit of happiness, that influential concept brought forth in the United States Declaration of Independence, is achieved not just by acquisition, but through voluntary sharing.

Since the Pilgrims first gave thanks in Plymouth, the concept of having enough extra food to serve any hungry wandering battalions of soldiers or Indian tribes remains an American tradition.

On one side of the patio were boards groaning under a full assortment of cheeses and fresh fruit. Opposite, candy and cupcakes
﻿﻿

As if this were not enough,  the waitstaff of 7 eased through the building throng with tray after tray of hors d'oeuvres style beef wellington, tostadas, ahi tuna on won ton crisps, chicken pot pie.... I will stop here before I get fat salivating over the memory!.
Shannon is not only, in the words of the smitten  Kenny Plunk, "Smart and beautiful," she is hardworking. The logistics- she handled like a seasoned pro. The date was somewhat decided by when Orange County cover band The Green Natives was available. Along with tables and seating, an extra large dance floor was brought in. A detail that made dancing so much more fun than if it had been on concrete pavement.

It tells you something about Kenny and Shannon that the guest list was not built around business associates.  Attendees were dearest friends of the bride and groom to be and family...
And Sheryl Stevens. Not a relation by blood. But through love. One of the kindest most honorable women we know.  By the oddest of circumstance, she is a friend to both Kenny and Shannon. That is a story we will leave until another day.
Happy birthday to Billie Plunk. YOU are our sunshine.

Catering by Robert at the Cooking Store in the Riverside Mission Grove Shopping Center. 951.776.1772


Friday Philosophy will return next week.
Posted by Lydia at 11:33 PM

"Salivating" doesn't cover it! More like full on drool all over my keyboard! What a beautiful set up and everyone dressed so perfectly. Great pictures L! Thanks for sharing. xo

Oh that was fun! A little history included with the wonderful photos of the yummy eats!!
Everyone looked like they were having a great time. Knowing California and the way it gets cold after dark, of course I was hoping the gals brought a wrap. That's just me tho.:):)
I was still looking for a photo of the groom's mom and dad and I did not see any! Girl, you need to get on the other side of that camera now and then!
Thanks for sharing!
Hugs, Trisha

Oregon Sue- Your description of drool reminds me of that BIG dog in a Tom Hanks movie- can't think of the title.

Trisha- Dancing and handsome me kept us warm! You probably didn't recognize me in second photo down on Sept 19th post):- Go back


You probably didn't recognize me with hair done and make-up.

Oh what a sensational event of happiness! Salivating - drooling, yep, I can get behind those words. Was obviously an affair to remember with the beautiful people and the fabulous food.