Saturday, the skies were threatening to make the Asians for Meg Whitman event at the Pacific Palms Resort wedding gazebo memorably soggy.
﻿﻿﻿﻿﻿﻿﻿﻿﻿﻿
California Senator Bob Huff had a word with " up above". The outdoor event arranged for by his accomplished wife, Mei Mei, went off without a hitch- or raindrop. 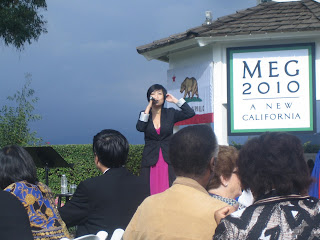 Technically an Asian-outreach event- we're very into assimilation in this end of town. Ella Wu, opened the event with two songs- one in English and one in Chinese. Currently recording her own CD, Ella sang in support of Meg's vision to make California a better place to work. 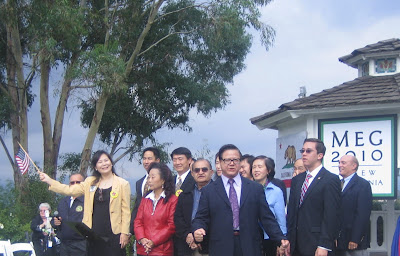 Chin- Ho Liao- wearing the dark glasses in the front row. IMHO-The man was born to sing on Broadway. After the Pledge of Allegiance he led the crowd into a rousing rendition of "God Bless America." The people you see at the front of the stage: they know what becomes so easy to take for granted. This is a wonderful country. 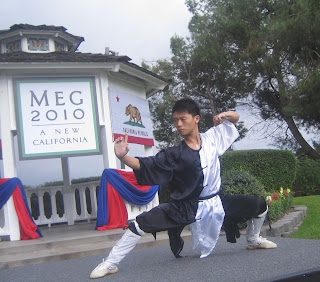 Master Fan Wei understands the role of perseverance. He began studying the martial arts studied at Shao Lin temple at the impressionable age of 5. He chose California as where he wishes to live his American Dream.
His demonstration of fist forms and kung fu skills held the crowd's attention at the front stage as we  waited for the guest of honor to arrive. 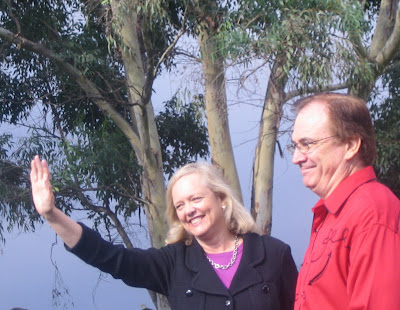 Bob introduced Gubernatorial candidate Meg Whitman. Her smile just might be the secret to her success.

There would be no energy crisis if the power of a smile could be harnessed.

So many of us are weary of grouchy bureaucrats whose answer to everything is file a lawsuit. We are tired of being skeptical at budgets held up by the majority while they have a ballot measure to reduce the numbers needed in the legislature to raise taxes. Perhaps that is too cynical. Perhaps they think we are simply stupid.

My own opinion is that if you think the future best lies in the hands of regulators and crony politicians; if you think prosperity is a product of regulatory procedures and if you believe this state is on the right track- then you should vote for Jerry Brown. Keep the status quo. Let the fields of the central valley die as our beloved state withers under one-party rule.

If you believe General Colin Powell's assertion that, "Optimism is a force multiplier."- You probably agree Meg when she promises, " What we can do together is more than we can do alone." You probably have the same understanding that, "This is the golden state not because we looked to the past but because we look to the future." If so: then the logical, enthusiastic vote for Governor of California is Meg Whitman.
Scanning the crowd, there were the faces of many people who have meant so much to me. To our community.  Many of the women helped organize an event- titled  "Where did all the women go?" about the perceived lack of women involved in Republican politics. Clearly that was way back in the last century):- 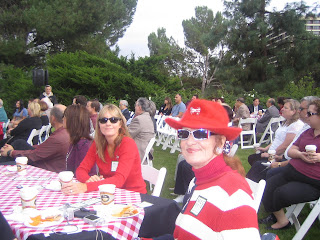 In the red V-neck sweater, looking forever 21 is Barbara Carrera. Another former "baseball mom", she is one of those quiet dynamos who always acts like a lady- and gets it done. Finance & Administration Manager at San Gabriel County Water District, Board Member Walnut Valley Water District, President of Diamond Bar Republican Women Federated are just a few of the balls she balances with grace and style. Half the men in town are jealous of her husband, Ted.
To her right is Trisha Bowler. If she never volunteered another minute- she has already done her share. If the Guinness Records people were to award "private citizens most followed by visual media" Trisha would have to be a title contender. 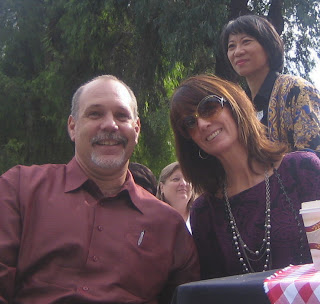 If he only knew the number of events I have been to on the west side where there is limited understanding of the vibrant "minority" presence in the Republican party. 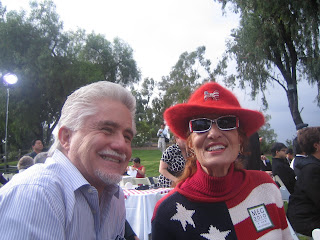 Trisha with her nephew, Randy Evins.
Last,  but not least, the man who knows Meg Whitman best, her husband., Griffith Rutherford Harsh IV.    The man who moved her in the 1980's, when the spirit of "Everything was possible" was in the air. Asked why he supports Meg  " She can make a difference because of her type of leadership. She is the right woman at the right time."
Posted by Lydia at 10:22 AM

Ohhhh Lydia!
BEST BLOG you have ever done!! No, not because I was pictured!:):) I am so impressed by your research and the fact that you posted the names of those entertainers and well as some in the audience! Amazing to me but then I guess you know how it's done with your years of journalist experience!
I enjoyed reading it so much and felt like I was there again enjoying. This is wonderful for those who could not attend that day. They can "be there" by seeing your photos and reading your words.

WONDERFUL JOB and I am sending to all!

Hugs, Trisha
p.s. Hey! You didn't post the cute photo of you next to Meg's big green bus holding up a Meg sign!

Dear Trisha- Thank you. For the compliments and the image across the tables to Aziz waving towards our table.

GREAT reporting job L!! It's still an uphill battle for you in CA., as it is here in Oregon. Fighting the lies and fighting the mud, it's a horrible task, but one our Chris Dudley is up for. Go Meg!!!
xo

Der Oregon Sue- Thank you for sharing your view from way up north. Charles Krauthammer I am not, but I LOVE peeling back they layer just a bit.

I totally agree with Trish! What a fabulous posting. Thanks for featuring us DBRWF in the pictorials. If you need any photo enlargements, get in touch with me as we have a photo lab.
Thanks so much for all your features
Bea Y

Part of my opposition to Jerry Brown is philosophical- only a lawyer would appreciate what his being re-elected means to what the voters meant to achieve through term limits.

Maybe I noticed because I did once vote for him. I'va already had the learning experience of knowing middle class people who were in fear of loosing their homes because the big winner of uptick in real estate market was the tax collector. At a time they didn't need the money. Government can be as greedy and malevolent as any business. That is why balance of power should be the rule, not the exception